A Party’s Willing Suicide & Those Who Pulled the Trigger 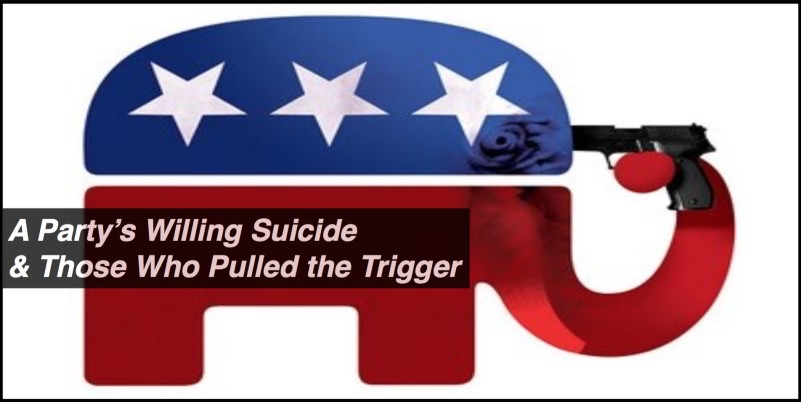 As our nation has watched the rise of Donald Trump from a billionaire celebrity to the front runner for the Republican Party Presidential nomination, the media has claimed that his support is revealing dissension, chaos and turmoil by the party’s voters.  While there is no doubt that voters are tired, frustrated and disgusted with the Republican establishment, is it fair to chalk up Trump’s success to simple voter unrest and anger?

While the press has focused to great extent on the anger of voters, what has largely gone unnoticed is the role the Republican Party itself has played in elevating to front runner status a man whose 40 year history has been characterized by values that are the antithesis of the Party.  Throughout Trump’s entire adult life, he has used his power, influence and wealth to support progressive liberal policies and politicians which are at total odds with Republicans.

Despite Trump’s unambiguous record though, Republican leadership both nationally and in states across this nation have undermined the values they purport to support by allowing democrats to weigh in on their nominee.  Research reveals that much of Trump’s support flows from independents and democrats.  So to use a football analogy, what Republican party leaders have done would be akin to allowing the fans of the Carolina Panthers to select the quarterback for the Denver Broncos, just prior to the SuperBowl.

Let me explain why this is the case.

America is dominated by a two party system, Republicans & Democrats. Depending on which poll you look at, Republicans make up around a fourth of voters, Democrats around a third, and independents account for the rest, approximately 40%.  However, when polling which direction independents lean, Democrats rise to 48% and Republicans to 39%.

In Tennessee where I live, we recently held our Presidential Open Primary.  So democrats & independent voters were free to determine who Republicans would select as their nominee for President.  Again, using the football analogy, what we have done would be similar to calling on Roll Tide fans to pick the Volunteer’s quarterback.  Can you imagine such a scenario ever occurring in college football?  Yet, for some insane reason, Republican Party officials have long supported such nonsense in the selection of their “quarterback” for the highest office in the land, as well as local offices.

To illustrate how large of a role open primaries, and thus democrats & independents, have played in fueling Donald Trump’s momentum and victories, let’s look just at some summary numbers that illustrate how the life-long democrat, turned Republican, has fared in closed versus open primaries/caucuses.

To drill down further into the numbers, in the 13 closed contests to date, Donald Trump has won only 5 of them, or only 38% of them.  Whereas in the 13 open contests so far, Trump has won 10, or 77% of the open primaries.  If one can draw any conclusion from these numbers, it is that when the home team picks their quarterback, they generally win the contest.  But when Republicans allow the other team’s fans (democrats) to help pick their quarterback, they will end up with a player whose commitment to their values is suspect, at best.

To be clear, the Republican party should strive to grow its support amongst voters.  However, while open primaries allow for new voters to engage in the process, there is no mechanism to insure that democrats with ill intentions are not purposefully meddling in the selection of the Republican nominee.  It’s a well known fact that democrats have deliberately crossed over into Republican primaries to undermine the outcome of Republican primaries.  As this is done, the votes of authentic Republicans are diluted and their will is marginalized, if not defeated.

Open primaries have been opposed by many voters for years now. In fact, last year the Tennessee Republican Party party was strongly encouraged by grassroots voters and activists to change its primary from an open to a closed one.  Yet, despite the efforts of many Republican voters from across our state, the Tennessee Republican State Executive Committee (“SEC”) ignored our warnings and last year voted to continue the Open Primary system in our state.

And now we see the result of the Tennessee SEC vote.  A man who is now the poster child for RINO’s (Republican in Name Only), given his 40 year history of supporting democrats and their leftists policies, is enjoying front runner status.  And those who enabled his rise should be held to account for their unwillingness to allow the home team to pick its own quarterback, free from the interference of the other team.

Should a party that willingly and knowingly contributes to its own demise expect the support of voters who warned them against such suicidal behavior?  In my lifetime I’ve heard democrats say that they didn’t leave the party but rather the party left them.  As Republican leadership continues to dilute the values that made it the party of Liberty, we are now beginning to hear those same comments from its base:  “I didn’t leave the party.  The party left me.”  Or perhaps we should say the party committed suicide and its leaders pulled the trigger.

Thanksgiving... in George Washington's Words
Why Jesus Did Not Seek to Change the Political
No Greater Love