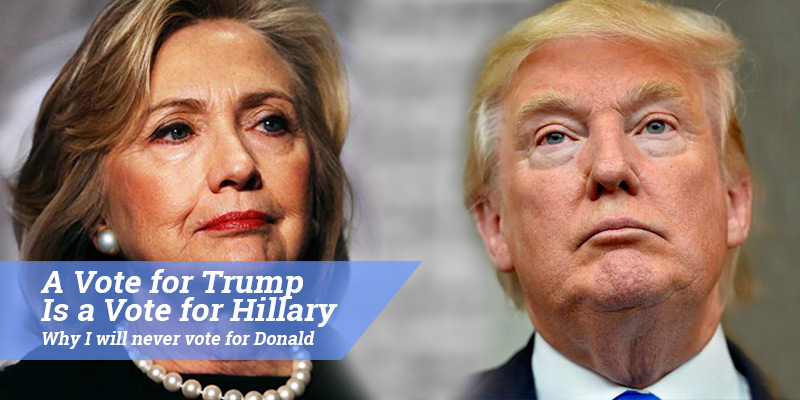 As I’ve begun to share with folks that if Donald Trump becomes the Republican nominee I will NOT vote for him, the standard response I hear is: “if you don’t vote for Trump you are voting for Hillary!” The intent with such a statement is to either 1) shame or coerce me into voting for Trump or 2) demand that I fall in line with the party nominee.

I find it ironic though that as Republicans have grown increasingly upset over their party and its unwillingness to live by its own principles, many are now embracing a man whose track record is the antithesis of the foundational values of the Republican party.

I contend that a person’s track record will always reveal the truth of who that person is and it will predict how that individual will act in the future. In the case of a politician, his words should be carefully examined and compared, with great skepticism, against his actual record. So when it comes to Donald Trump, let’s see if my theory holds any truth: that a vote for the Donald is in fact a vote for Hillary. Below are more than 30 examples where both Trump and Hillary are identical in their views on a number of key issues:

Of course there are areas in which their records diverge but when one considers the myriad of consistencies in the positions of Donald Trump and Hillary Clinton, the only conclusion I can come to is that Trump is no conservative. But even worse, the man is a faux Republican. If ever there was a RINO (Republican In Name Only), Trump is such a candidate, but on steroids. Truthfully, Trump is simply a liberal democrat who has deceptively embraced the Republican label, with nothing to justify his conversion.

There’s a verse of Scripture that states, “By their fruits you will know them.” In the case of Donald Trump, his fruit of over 50 years is well known and if we are willing to objectively examine it, there can be no question as to his liberal bona fides. But will Americans care? We shall know soon enough… but it may be too late.

Will the Trump Presidency Touch Down or Crash Land?
If You Reject Hillary & Trump Here are Some Options
Time: Best Friend or Worst Enemy?