America: The Point of No Return? 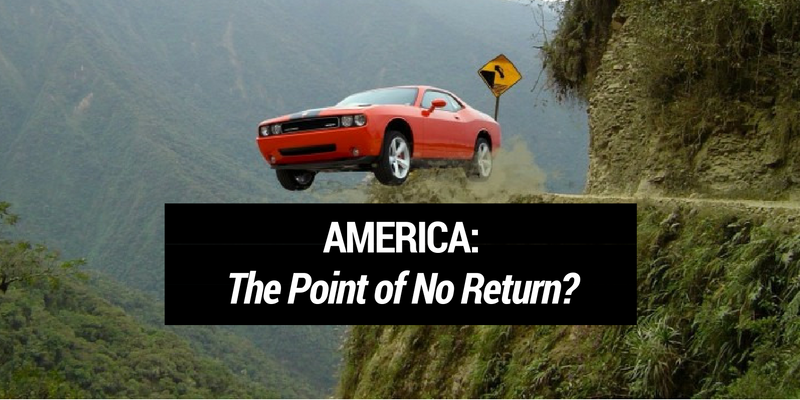 Over the last decade, I have interacted with hundreds, if not thousands, of fellow Americans, as we have shared our grave concerns over the direction of our nation.  There is no doubt that the land of the free and home of the brave is on a course that threatens our future and the very survival of our nation.  So we must ask ourselves this question.

Have we reached the point of no return?

Some may brush off such concerns, believing that America is too big to fail, and asserting that as the world’s superpower, our future remains secure.  They reject the voices that continue to warn our leaders, citizens and neighbors that something is seriously wrong, and that never before has a nation ignored and rejected so many warnings and foundational principles, and survived.

One only needs to shuffle through history to recognize that nation after nation has ultimately stumbled and fallen when it turned its back on the basic building blocks of any exceptional civilization.  Today, I would like to briefly touch on a few of the key foundation stones.

If there is one thing that dominates the hearts and minds of Americans it’s the almighty dollar.  The economy consistently scores at the top of issues that concern Americans.  In fact, the phrase, “it’s the economy stupid” became an often used slogan during the Clinton-Bush presidential campaign in 1992.

But with our nation’s current debt at $19,500,000,000,000 (that’s trillion) and its unfunded liabilities exceeding another $100 trillion, many would say that this issue alone has already taken us past the point of no return.  Regardless of who is elected in November, both Clinton and Trump’s plans will continue to increase the national debt, at alarming rates.

However, it may surprise you to know that according to a recent study by Committee for a Responsible Federal Budget, our nation’s federal debt would fare far worse under Trump with the debt in 2026 soaring to $39.5 Trillion, double the current debt.  Under a Clinton administration, the national debt would rise to $29.6 Trillion.  While $10 Trillion less than Trump, both candidates’ plans would put the final nail in the fiscal coffin of our nation.

The idea that we can continue to spend into oblivion with no consequences whatsoever is one sign that a nation is on the path to ultimate collapse. 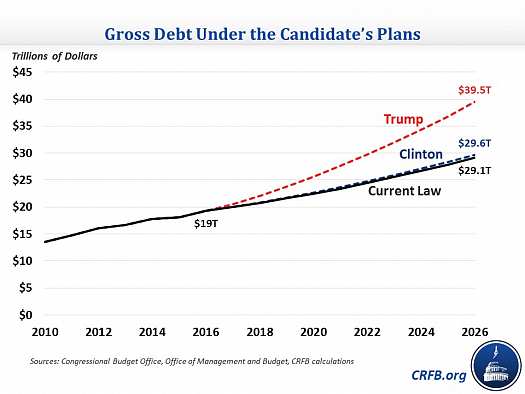 There have certainly been periods of political dysfunction and turmoil over our 240 year history as a nation.  And I suppose that occurs when men seek and desire power, often above all else.  But as we see the magnitude of the problems facing our nation increasing exponentially, the prolonged polarization we are experiencing represents an existential threat to America.  Good men and women can disagree, but at the end of the day, opposite sides of an issue must find some common ground if they are to solve problems in a republic, the system chosen by our founders.  Of course, this also assumes that both sides are honest players in their desire to solve our problems, which is no longer the case.

Without our political leaders seeking the best for our nation, it’s unquestionable that the course we are on is headed for a ruinous conclusion.

“Life, liberty and the pursuit of happiness…” — the bedrock values of our nation.  In selecting these words, our founding fathers sought to affirm the fundamental rights granted to man by God.  By doing so they established the ground rules upon which we would live with each other.  These rules, or sacred rights, would be the basis for all future interactions between the hundreds of millions of Americans that would follow them.

But in this era, no longer is Life revered and protected.  Liberty is being handcuffed and under constant assault.  And the Happiness one was once free to pursue is subject to approval, or disapproval, by the state.

As all of these founding rights have come under attack, corruption within our government and businesses has skyrocketed. Politicians use government as their own private wrecking ball in destroying those citizens, groups and states with whom they disagree.  Businessmen use their enterprises to achieve personal gain, irrespective of the customers they manipulate, prey on, or defraud.  Consequently, it’s only fitting that the two candidates for President exemplify the worst this nation has to offer, when it comes to candidates of high ethical standing.

We see then that as a nation’s ethics plummet and it removes the foundations of truth, the structure upon which it was built begins to sway and will ultimately topple.

Morals, the system by which we determine good and bad, is absolutely crucial in directing the ultimate destination of one’s life, enterprise and even nation.  Morals are impacted and greatly influenced by the culture and society.  Yet all morals are not equal.

Consider that under the teachings of Muhammed, the founder of Islam, it is appropriate to lie to advance the cause of Islam.  It is also valid to subjugate non-Muslims, since they are deemed to be inferior people, referred to as kafirs.  In contrast, the teachings of Jesus Christ instruct humanity to do unto others as you would have them do unto you, the golden rule.  And Christ also taught us to love our neighbor as ourselves.  Clearly, these two ideologies, Islam and Christianity, are at two extremes in defining their morals, what is good and bad.

Over the last half century or so, our culture has radically redefined our morals.  What was good 50 years ago is now bad, and what was bad then is now good.  I could spend the next several paragraphs providing examples, but if you’re awake, you know how what was considered evil just a few decades ago, is now embraced, celebrated and promoted.

Morals, like ideas, matter.  When a nation rejects good and elevates evil, and when that same nation punishes those who embrace good, and it codifies that which is bad, there can be no doubt that such nation is on a short path to collapse.

For America, perhaps this is the seminal issue upon which the ones above all rest.  A skyscraper is only as sturdy and secure as the foundation upon which it rests.  Likewise, the American experiment over these last 240 years has been an extraordinary success because of the Judeo-Christian values upon which it rested.  But as those values have not only been attacked, but ultimately replaced over the last few decades with secularism, it’s clear that the experiment has begun to falter.  And as it falters, we will have reached the point of no return.

We read in Scripture this promise, “Blessed is the nation whose God is the Lord.”  But we also read that “A nation without God’s guidance is a nation without order.”  Could there be any more fitting description of the condition of our nation today?  And if God is the same yesterday, today and forever, as He declares, then we must certainly expect the coming extreme judgment of a Holy God as He has shown in so many other examples over the millenniums.

Ronald Reagan, our 40th President, while imperfect, exemplified the values of our founders and sought to redirect the trajectory of our nation.  The course we were on was taking us to the point of no return but Reagan’s commitment to revitalize our economy, politics, ethics and morals, while elevating the spiritual, slowed our nation’s arrival at the edge of the cliff.

In one of Reagan’s most famous speeches entitled “A Time For Choosing,” first delivered in 1964, Reagan exposed the threat to peace by the Soviet Union.  But his comments then are likewise applicable to my discussion today.  In his closing remarks, Reagan stated:

“Someday… our surrender will be voluntary because by that time, we will have been weakened from within spiritually, morally and economically… You and I have a rendezvous with destiny.  We’ll preserve for our children this the last best hope of man on earth or we’ll sentence them to take the last step into a thousand years of darkness.”

Our rendezvous with destiny is upon us.  By our choices and priorities over these last 50 years, we have established that destiny.  And while our national destiny is perhaps past the point of no return, individually we can and must establish our own personal destiny, which does not have to mirror that of America’s.  I pray you will embark on a plan to secure your destiny, economically, morally and spiritually.

To find out how, check out this previous article I wrote providing some specific and practical steps that we can all take.

The Sons of Issachar.  Are You One?
2021:  Same Old Song? Just Another Verse?
Party, Principle or Pragmatism? What Drives the Tea Party?