Assembly Lines, Government Schools & the Loss of Our Republic 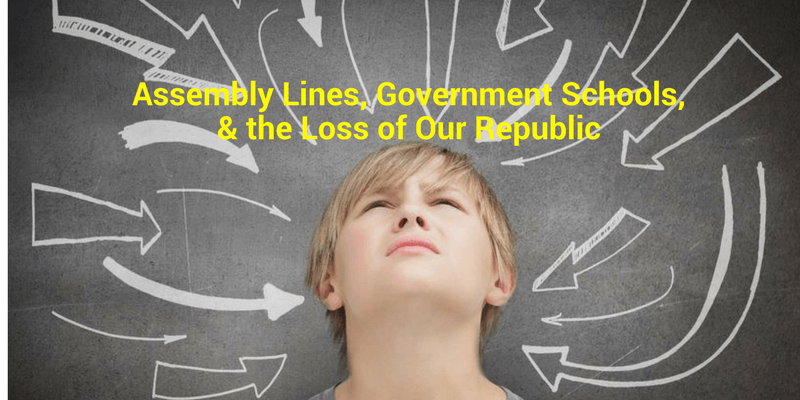 “Train up a child in the way he should go and when he is old he will not depart” is a verse from Proverbs that is often repeated in Christian circles.

The fact is, most of my life I have subscribed to the hope this verse offers in raising one’s children.  Of course, I have considered the truth of this verse from the vantage point of the values that I believe to be true and worthy of living. But it dawned on me recently, as I was meditating on this passage, that this truth applies equally to those who do not share a conservative ideology or values.

So a child, trained up in values that are the antithesis of conservative, Judeo-Christian values, which I will refer to as liberal progressive values, will also generally not depart from those values when he or she moves into adulthood.

In a factory, assembly lines are used to create a product.  At the start of the assembly line, what commences as a heap of parts with little recognizable form, begins to take shape the further they travel down the conveyor belt.  Along the way, various assemblers interact with the parts as they pass through their stations. Each encounter leaves an indelible mark on the product being formed.  Ultimately, when the parts reaches the end of the assembly line, the predetermined process yields the desired result and the finished product has the marks of its assemblers, as programmed by the designer, embedded into its “DNA.”

Progressives understand the concept of an assembly line and they’ve mastered it to perfection, beginning many decades ago, as it relates to the education system in America.

Our government-run educational institutions in America, more aptly referred to as “government schools,” is one of the greatest outward manifestations in our nation of the truth of the verse, “train up a child…”  For years now, a liberal progressive mindset that opposes traditional Judeo-Christian ethics, has dominated not only K-12 but also higher education as well.  The most obvious instance of the demarcation of this anti-biblical philosophy came when both the Bible and prayer were removed from our public schools in the early 1960’s.

According to a study by David Barton entitled America: To Pray or Not to Pray, the removal of an absolute moral standard by which our children were educated for the first 150+ years of our nation, has led to a deterioration in a host of categories including the number of single parent households, divorce rates, violent crime, SAT scores, premarital sex, pregnancies for unwed girls, STD’s, and more.

The statistics are a damning indictment of the liberal progressive philosophy that has permeated our educational system.  And the extensive degeneration of our culture, morals, family, respect for one another, and more, is largely attributable to the relativistic, amoral philosophy that has been ingrained into the minds and hearts of multiple generations.  As the saying goes, “garbage in, garbage out” and there is no doubt that the liberal progressive philosophy that removes God from the equation, can only be described as garbage, or better yet, poison.

The Loss of our Republic

Our Founding Fathers understood the importance of a proper education in the maintaining of our Republic and Liberty itself.  But their views were at odds with not only an errant 1960’s Supreme Court that banned prayer and Bible reading in government schools, but also with liberal progressives who have been intent on undermining the foundational values upon which our nation was built.  Our Founding Fathers spoke extensively about the impact religion and morals have on the individual and the ultimate survival of our Republic, but here are just three examples:

“The only foundation for a useful education in a republic is to be aid in religion.  Without this there can be no virtue, and without virtue there can be no liberty, and liberty is the object and life of all republican governments.  Without religion, I believe that learning does real mischief to the morals and principles of mankind.”  Benjamin Rush (signer of the Declaration of Independence)

“We have no government armed with power capable of contending with human passions unbridled by morality and religion. Our Constitution was made only for a moral and religious people.  It is wholly inadequate to the government of any other.”  John Adams (signer of Declaration of Independence and 2nd President)

“The Christian religion, in its purity, is the basis, or rather the source of all genuine freedom in government, and I am persuaded that no civil government of a republican form can exist and be durable in which the principles of that religion have not a controlling influence.”  Noah Webster (author of first Dictionary and American Speller, a book that taught children on subjects of morality and American government)

While half of America is hopeful and celebrating the election of Donald Trump, the other half is hopeless, frustrated, angry and in some instances even revolting against Trump’s Presidency.  But regardless of your view of Trump, there is a larger truth hanging in the balance.  Unless there is a change in the philosophy driving the conveyor belt that continues to churn out a secular humanist product, year after year, from our government schools, our Republic faces little hope.  Remember, the liberal progressive ideology is controlling the young fertile minds of our future voters for a minimum of twelve years.  And as our verse reminds us, “train up a child in the way he should go, and when he is old he will not depart.”

Control the children, control the future.  So unless those controlling the assembly line and the ideology training our children are changed, there is little hope for our Republic and Liberty itself.

An Aborted Life: The Thoughts & Dreams of Baby Annie
A Day to Save Life or Destroy it?
Is Freedom Yours?