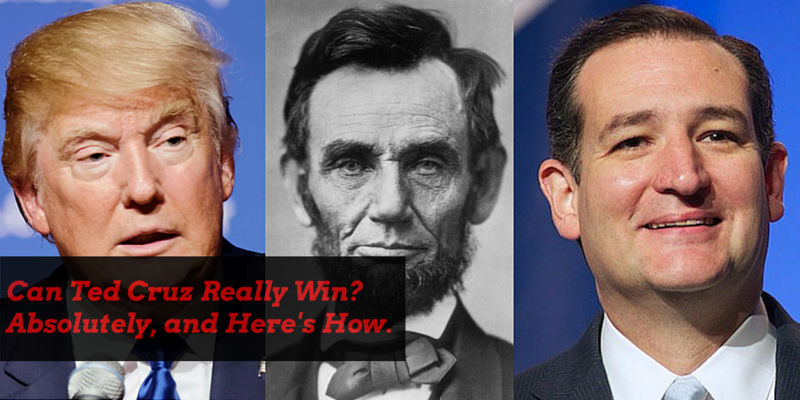 As the race for the 2016 Republican nomination for President continues to heat up, we have passed the midpoint of the campaign.  What started out as a field of nearly two dozen individuals, has now effectively been narrowed to only two viable candidates, Cruz and Trump, and a third who fancies himself a contender.  (That “would be contender” is John Kasich, a guy who has lost 35 contests and won only 1!)

Donald Trump, the figurative elephant in the room, leads with 739 delegates while Ted Cruz trails Donald by 274 delegates, with a total of 465 delegates.  To earn the Republican nomination a candidate must accumulate a simple majority of the 2,472 delegates available, or 1,237 delegates.  The rule of requiring a majority (versus a plurality) has been in place for 160 years.

As I’ve discussed and debated the current status of the Republican campaign with many friends, and as we face the prospects that no candidate will garner the simple majority of 1,237 delegates required, the reality that the Republican nominee will be selected via a contested or brokered convention is becoming more and more likely. However, I am hearing a growing sentiment from many who are suggesting that if neither viable candidate has garnered 1,237 delegates, then Trump should simply be handed the nomination, if he has the most delegates.  What this attitude does, though, is it actually disenfranchises the majority of voters who did not vote for Trump. Consider that as of today, approximately 21 million voters have cast ballots in the Republican nomination for POTUS. However, less than 8 million have selected Donald Trump, or only 37% of voters.

In addition to disenfranchising 63% of the voters to date, the other major issue that “handing” the nomination to Trump would do, is it would totally ignore rules that have been in place for 160 years.  For a candidate to win the nomination, it’s incumbent that he put together a strategy to win based on the rules of the game.  It would not only be unfair, but it would be arrogant and presumptuous for a candidate to enter the race for the nomination and then, when his candidacy does not succeed, he begins to grumble about the rules, rather than look in the mirror and realize that he is the problem, not the rules.

According to an article at The Federalist, since the Republican Party held its first convention in 1856, there have been a total of ten presidential elections where the candidates arrived at the convention without a majority of the delegates.  The Party’s process to select a nominee consists of two steps: 1) voting for one’s preferred nominee and, 2) voting for delegates to represent the voters at the party’s convention.  The first step results in the awarding of the delegates to the candidates based on differing rules by state, and the second step selects the delegates who will actually choose the nominee at the party’s convention.

When a candidate is able to make the case to the voters that he is the individual most suited to be their nominee, then he will arrive at the convention with his victory already sealed, as has been the case in 75% of the Republican nominations over its 160 year history.  However, in those other 25% of presidential elections, for various reasons the leading candidate was unable to persuade a majority of the voters and/or delegates that he was their pick to represent them in the general election.  In these instances a contested or brokered convention ensues, with one or more ballots taking place until the delegates are able to coalesce behind the eventual nominee.

Trump boasts often of his skills as a negotiator.  So if he truly trusts those superior skills, then he should have no problem in convincing the additional delegates he would need to rally behind him and cast their vote for him on the first ballot.  As a side note, its pathetic to hear Trump threatening that if he does not reach the 1,237 delegate and the nomination is not handed to him, there will be riots by his supporters.

So now we come to the question, if Trump does not secure a majority of the delegates by the convention or following the first ballot, what is the path to victory for Ted Cruz?

One of Ted Cruz’s strengths is that of planning, organizing and strategy.  No one gave the freshman Senator a ghost of a chance to even be competitive during the 2016 cycle, much less be one of the last two viable candidates competing for the nomination.  Yet here he is.  And much of it can be attributed to: 1) the fact that Ted’s record affirms he is a consistent, constitutional conservative, and 2) Ted’s understanding of the rules of the game, and his ability to develop a team and strategy to win based on those rules.

So should Trump fail to secure the nomination on the first ballot, there’s a strong indication that many of Donald’s delegates will desert him on the second ballot.  When you consider that a number of Trump’s delegates were awarded to him from “winner take all” states, it only stands to reason that some of those delegates will not support him on a subsequent ballot.  For instance, in South Carolina, Trump received the plurality of votes and thus he received all 50 delegates in that “winner take all” state.  However, Trump only garnered 32% of the vote.  So it’s easy to see how that once those delegates are free to vote for another candidate, it’s highly likely many of the delegates will move to Ted Cruz.  This is just one example of a number of ways in which Trump will likely lose delegates should he fail to win the nomination either outright prior to the convention or on the first ballot at the convention.

Finally, we should consider that not only is this process following rules that have been in place for 160 years, but one of our nation’s greatest Presidents, Abraham Lincoln, prevailed on the third ballot at the 1860 Republican Convention to win the nomination and ultimately the Presidency.  And there have been other instances throughout the history of the GOP where second or third place candidates became the nominee on multiple ballots as reported in this article at The Federalist.

So, if you’re a Ted Cruz supporter, continue to encourage others to support him, remember Ted and his team in your prayers, and share this article with others so they understand how Cruz can absolutely win the nomination if Trump does not reach 1,237 delegates before the convention.  And if you are a Trump supporter, I encourage you to remember the rules of the game, hold your candidate accountable to them, and please don’t riot should Trump fail to win according to the rules.

Her Today, Him Tomorrow: The Transgender Lie
America: The Point of No Return?
No, Your Civil Duty is Not Complete on November 8