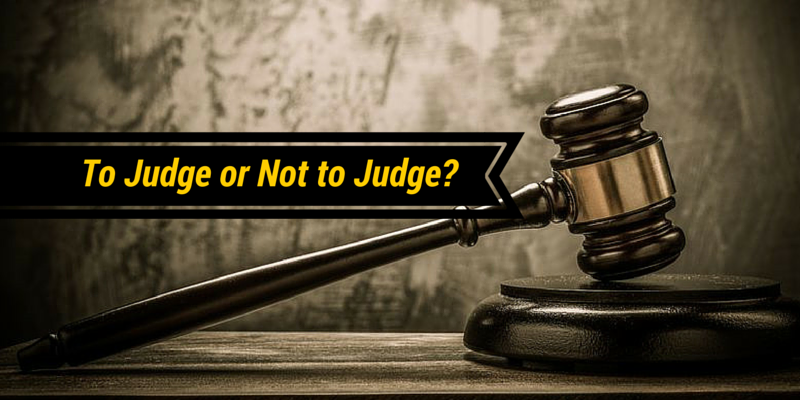 To Judge or Not to Judge?

In this day in time, there’s hardly a week that passes where some major moral issue isn’t being debated in the court of public opinion.  Whether it’s via the courts, primetime TV or social media, it seems more and more of the values that many of us and our parents and grandparents grew up with are now on trial and under full attack.  From marriage and abortion, to homosexuality and transgender facilities, the standards that have been in place for generations are now being undermined in an ever more intense manner.

At the same time as these cultural and political battles are taking place, there is an effort by the same elite to stamp out all dissent, whether via political correctness, so-called tolerance, or even through courts, legislation and government regulation. One other popular method that those attacking our most fundamental values are fond to employ is by using the Bible itself to silence Christians.  In particular, those who frequently despise the Holy Book, are all too eager to use select passages to either advance their agenda or hush poorly informed Christians, who may not dust their Bible off that often.

A passage that is continuously misquoted, perhaps more than any other in the Bible, is in Matthew 7 where we read, “Judge not, that you be not judged.”  And so it would seem that with one short verse, the entire Christian argument on any of today’s difficult issues is silenced.  As the passage goes on to say, “why do you look at the speck in your brother’s eye, but do not consider the plank in your own eye?  Hypocrite!  First remove the plank from your own eye, and then you will see clearly to remove the speck from your brother’s eye.”

No one wants to be a hypocrite, even though, if we are honest with ourselves, there are areas in our lives where we all say one thing and sadly live another.  So doesn’t this passage clearly say we must remove the plank out of our eye before we can remove the speck out of someone else’s eye?  So how can we ever speak out or “judge” any matters of any importance that involve our “brothers” or even our friends or neighbors?

The truth is that if you and I are the judge and it’s our own law, then we clearly cannot judge others.  If the standard by which we evaluate others and their actions is a subjective, personal standard, then who are we to tell someone else what is right or wrong?  In fact, if the standard is my own, and thus subjective, then you likely have your own as well.  And so then there is no objective, absolute standard, and thus no right or wrong.

But there are in fact absolutes, contrary to today’s prevailing philosophy.  We all know this both inherently and because we have experienced these absolutes.  The law and even nature are both quick to remind us of them.  Break the speed limit, and blue lights will remind you of certain absolutes.  Leave a few dollars off your tax return, and the nation’s favorite governmental agency will send you a bill with interest and penalties for forgetting that income.  Strike someone with malice, and a man in a black robe may sentence you to years behind bars.  Walk off a building, and you’ll quickly learn that nature itself attests to absolutes.  So it’s clear we live accountable to absolutes all the time, whether we like them or not.

But back to the “judge not” passage.  The Bible is a book of history, prophecy, morality and spirituality, but it is ultimately God’s message to mankind.  The Bible instructs mankind on matters of morality and from those precepts, man is then able to discern right and wrong.  He is not the judge, as God established the law.  Man is simply one who discerns right from wrong, good from evil, based on God’s absolute standard.  So God judges.  Man discerns.

When you or I speak out on a moral issue that is delineated in Scripture, the judgment being made is not merely our own, but it is one based on a moral standard that supersedes our own.  In this case, it is God’s.  The Bible is clear in its admonition to reject evil, embrace good and expose darkness, as these passages clearly illustrate:

“Putting away lying, let each one of you speak truth with his neighbor.”  Ephesians 4:25

Finally, we are called in John 7:24 (just a few verses after the “judge not” passage) to actually “judge with righteous judgment.”  This passage clearly suggests that when “judging” is done righteously, meaning according to God’s perfect standard, then that judgment is not only appropriate but it is commanded.

So the next time you hear someone misquote Matthew 7:1 by telling you to stop judging, consider that they are doing so out of either ignorance, or worse, they seek to simply silence you.  But now you know better.