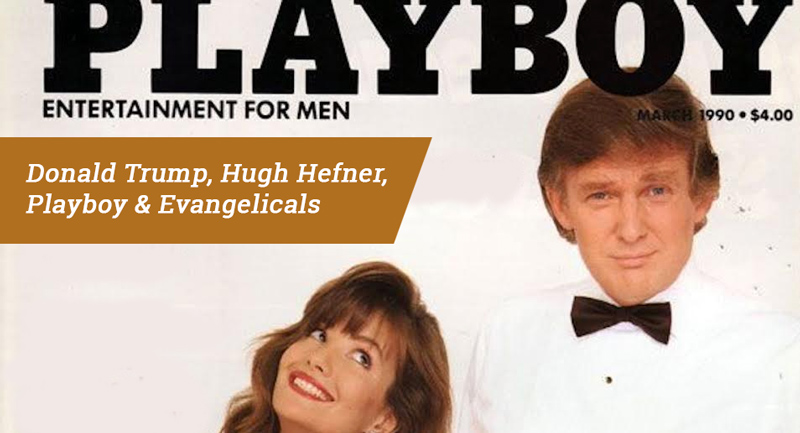 I find it very curious that so many folks have enthusiastically thrown their support behind Donald Trump in 2016. But I’m particularly amazed at evangelicals who have fallen head over heels for Trump, both those in the pews, as well as noted evangelical leaders such as Jerry Falwell, Jr., Robert Jeffress and more. As I’ve listened to these men trumpet their praise for Donald, much of their rationale is based on the billionaire’s perceived business acumen and his supposed fiscal credentials.

The sentiments by Falwell, Jeffers and millions of other “pragmatic” evangelicals prioritizing the economy and fiscal matters is quite puzzling and got me wondering whether other values of an individual should be ignored? Do a candidate’s positions on other issues matter? What about his personal behavior and life — is that fair game? Or should we simply remain focused on fiscal issues, as if strengthening the almighty dollar should be our nation’s singular priority?

Let’s consider another businessman who, by any measure of economic standards, has achieved extraordinary business success. In 1953, a 27-year-old entrepreneur, struggling to find his place in the world, invested $600 of his limited capital to launch a monthly periodical. The first issue was an instant success, selling out all 53,991 copies at 50 cents per copy. Over the next several years, the magazine’s circulation grew to over 1 million by 1960, and it continued on a rapid upward trend, peaking at over 5 million copies monthly in 1975.

Boosted by his rapid success, the young entrepreneur ventured into a number of related business ventures, including casinos and night clubs. With his growing success, the periodical he founded attracted mainstream authors and secured interviews with noted personalities, including presidential candidate Jimmy Carter and even Donald Trump.

Despite falling on hard times in the 80’s, the following decade the business regrouped under the leadership of his daughter. As a result, the enterprise that began as a men’s magazine nearly 40 years earlier successfully launched a TV channel and soon after that a membership only website. Fast forward to 2015 and the founder of that first fledgling periodical in 1953 now boasts a multi-billion dollar global operation. And this entrepreneur’s own personal net worth is estimated at $50 million… which all started with a $600 investment.

Obviously, from the title of my article you can already surmise our mystery entrepreneur is none other than Hugh Hefner, founder of Playboy, one of the most economically successful men’s magazines of all time. Yet, by any measure of wholesome and upright values, Hugh Hefner is someone who has preyed on women and capitalized on the sexually degenerate appetites of men. Hefner is a man whose values have served to hasten our nation’s slide into the abyss of moral degradation and depravity. The door Hefner’s Playboy dared to crack open has ultimately served to proliferate an industry that has become so mainstream that many simply shrug their shoulders as it leads millions of young men down a dead end trail of remorse and regret.

Like Hugh Hefner, Donald Trump has achieved extraordinary business success and it’s this success that he touts when he claims, “I’m running for office in a country that’s essentially bankrupt, and it needs a successful businessman.” There is no doubt that America’s fiscal condition is dire with up to 40% of all federal expenditures being funded through increasing our national debt as it bursts through the $20 trillion mark. But driving this fiscal threat is our bankruptcy as a nation relative to our adherence to the Constitution and the principles of our founding fathers, including those Judeo-Christian values upon which America was founded.

I believe all that we do flows from our core values so while evangelical leaders like Falwell and Jeffress appear to base their endorsement of Trump on his fiscal prowess, I believe one cannot and should not ignore the values behind Trump’s financial successes. So, let’s look very briefly at just a few of Trump’s “values” that would be at odds with the values many evangelicals and conservatives claim as their own:

These are just a few highlights of Trump’s views that clearly conflict with conservative values.  To find out more about the issues Trump supports, that should concern conservatives, go to Conservative Review here and here. Additionally, for evangelical conservatives, these articles by CNN and The Daily Beast provide additional areas of concern.

At the end of the day, I believe that one’s core values will ultimately influence every other decision a person makes. And while our nation certainly requires some drastic fiscal reforms, there are still matters that should trump the dollar, even when it comes to Donald Trump. And finally, we should all remember the words of Jesus when He said, “What profit is it to a man if he gains the whole world, and loses his own soul?” At this crucial time in our nation’s history, are we more concerned in gaining the world or losing our souls?

As my fellow evangelicals head to the polls, I pray they will not only ponder their answer to this question, but I encourage them to read the Resolution on Moral Character of Public Officials. 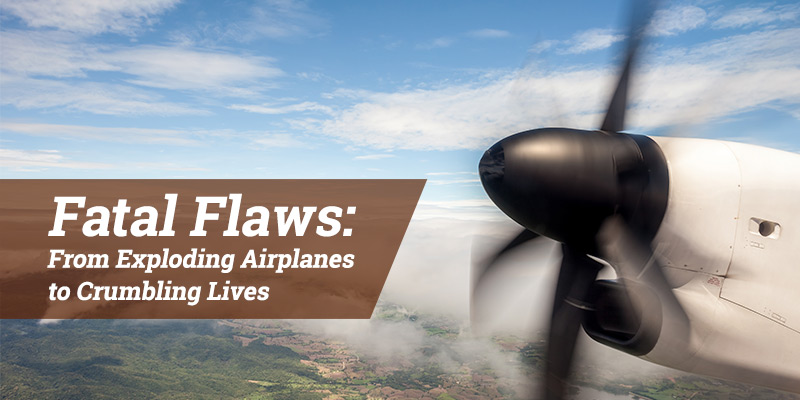 Boom! As I sat staring out the window of our twin engine plane, I could hardly believe my eyes. The engine just feet from my window had exploded, with parts and fluids blowing through the cowling (cover) of the engine. The plane began to veer hard to the right and was losing altitude. I looked around at the other passengers, some of my closest friends and employees, and I saw a look of fear, concern and perhaps even panic by some. Could this really be happening to us?

But let me back up and start at the beginning. In the mid-1990’s my business partner and I had decided to purchase an airplane to get around to the properties we owned and managed in a more efficient manner. When we began discussing which plane to purchase we quickly determined it must be a twin engine plane, for the simple reason that if we were to ever lose one engine, we’d still have a second one with which to try to make a controlled landing.

We had purchased our plane, a Cessna 421B Golden Eagle, three years earlier from Burt Reynolds when he and his wife, Lonnie Anderson, were going through a divorce. There was no mistaking the plane due to its Florida State Seminoles colors, with the entire fuselage painted garnet and accentuated with gold arrows painted down the side.

On the day of our “incident” we had fully loaded our eight-passenger plane, including 2 pilots. Technically we only had seven people on board but we also had quite a bit of cargo. We took off from Chattanooga Lovell Field headed towards Birmingham and everyone was cutting up but looking forward to a productive day. We had just cleared Lookout Mountain when our right seat pilot turned around and blurted out, “Guys, we’ve got a problem and we’re going to have to cut off our right engine.”

No sooner had those words left his mouth than the engine exploded right next to me. Our two regular pilots, both close friends, began to deal with the repercussions of flying a maxed-out plane on one engine. As they turned the plane back towards Chattanooga they radioed our emergency situation to the Chattanooga tower. While the plane continued to fly on the one remaining engine, it was clear that we were not maintaining altitude. As I looked at the terrain below, it seemed to me that the obvious choice would be to simply land on any empty road below. But the pilots thought otherwise and as we returned to the airport we had just left 20 minutes earlier, we could see emergency vehicles lining the runway.

Thankfully, our two pilots did a masterful job of not only flying a wounded airplane back to base but they also touched the plane down as smoothly as if we had both engines functioning. Needless to say, the moment that our wheels touched the runway, all of us breathed a heavy sigh of relief and we openly thanked God for the safety He had offered to us that day. 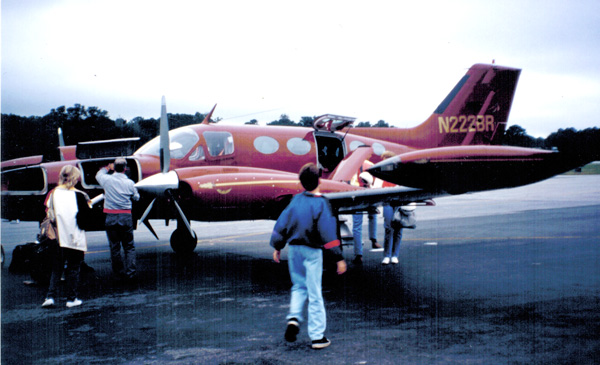 The interesting part of this whole story though is that the engine that blew up had just been overhauled and had less than 33 hours on it. Over time, and following a lawsuit with the company that refurbished the engine, we were able to determine that the cause for the catastrophic engine failure was due to the re-installation of a questionable reconditioned cylinder. So, had things not turned out so well that day, seven lives might have been lost due to that flawed part.

Flaws. We see them in airplanes, automobiles, computers and pretty much anything that is man-made. It’s also not unusual to see public figures, whether religious, political or entertainment personalities, destroy their lives because of a “flaw” that was ignored.

But truthfully, when you and I look in the mirror, we also see a flawed person. Some flaws can be rather minor, not resulting in life-shattering consequences. Yet other flaws can cause catastrophic results in one’s life or the lives of those we love.

If we are honest with ourselves, we typically know our own flaws, from the “little” ones to the big, ugly ones. We don’t really need someone to enlighten us about them. In fact, oftentimes these flaws have been with us for years. It might be that we have simply accepted the flaw because we just don’t know how to overcome or conquer it.

But here’s the reality. Sooner or later, that big ugly flaw will take you and me down. Just as our airplane’s engine revealed its flaw, our lives will sooner or later reveal ours to us and then to others. So the first step in addressing the flaws in our lives is to simply recognize they are there.

There is a passage in Proverbs that states, “As iron sharpens iron, so one person sharpens another.” There are several conclusions we can derive from this passage but one is that we must invite other people into our lives. As we engage with them many of our rough edges can be honed and even eliminated. Clearly, we were not meant to be alone so it is critical that we walk through life with other trusted individuals who can be there for us as we need them. Two are better than one, and if you or I have a flaw that is simply overwhelming us, it’s critical that we enlist a trusted person to help us in addressing that flaw before we see our life crumbling around us.

In addition to the idea of iron sharpening iron, there’s also another parallel principle that suggests that we should “confess our faults one to another.” As we acknowledge the faults we have in our lives and share them with others we trust, we create a system of accountability. And through that accountability as well as the prayers of our others, we find the healing that enables us to overcome the faults with which we struggle.

While the concepts we’ve addressed here can be deeply personal, we should not forget that our personal lives also influence our businesses and work environment. So those flaws that seem to be simply “personal” in nature will ultimately surface in a way that they can do serious damage to our businesses.

So now is the time to deal with that nagging fault that you know is there. Ignoring it will ultimately allow it to surface at the most inopportune time, and can cause catastrophic damage to your business, your family and ultimately you.