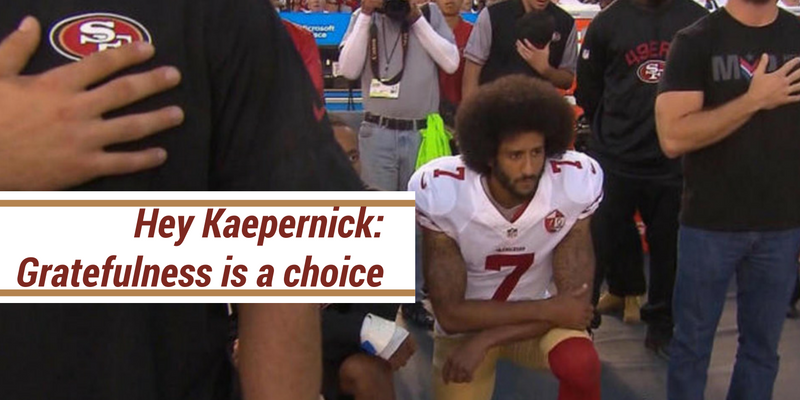 Hey Kaepernick: Gratefulness is a choice

Why is it that some who possess the greatest this world has to offer are the most ungrateful, while some who have the least in terms of worldly possessions are the most grateful?

Specifically, I’ve watched the antics of Colin Kaepernick over the last several weeks and been amazed at the choices and behavior of a man whose life could only be characterized as a dream beyond one’s wildest imaginations.  With a stratospheric compensation contract totaling over $100 million, adoring fans, celebrity status, health, youth, a lifetime of opportunities ahead of him, and so much more, Kaepernick is blessed with an elite status that 99% of the billions of people around the globe cannot even begin to comprehend.

Colin’s biological mother is white and his father is black.  But his mother, destitute and single, gave Kaepernick up for adoption to white parents.  No one could have imagined that this child, who was likely destined for a very ordinary life at best, would achieve the status he has attained.  Consider that Colin’s weekly compensation of nearly $300,000 is approximately six times the US annual median household income, and his annual compensation is nearly 300 times that same number.

I have always subscribed to the biblical principal that “To whom much is given, much is required.”  And the truth is that just about any American has been given much, when compared with the other 7 billion citizens of our globe.  Yet, there are a few ultra-elite who have been blessed with unfathomably more than their fellow Americans.

The opportunities that are available to them to use their status and the platform they enjoy is exponential, with the ability to speak positively about the struggles plaguing our society and culture as well as engaging in uplifting meaningful activity.

Yet, all too often, their approach is one of condemnation versus uplifting.  Rather than playing a positive role model, they epitomize what is actually wrong with our society and culture.

There is a verse in scripture that says, “I have found that whatever state I am in, to be content.”

In this passage, we read that the Apostle Paul was an elite of his society, in terms of education, status and as a citizen of Rome.  Despite his status, Paul often found himself maligned and persecuted, enduring oppression, injustice, incarceration, and actual personal harm.  Yet he made a choice to be grateful and content, in spite of his circumstances.

Of course, Paul offers his secret as to how and why he was able to make such a choice two verses later when he notes: “I can do all things through Christ who strengthens me.”

Therein lies the secret.  It is not in our own strength that we can exhibit gratefulness.  But rather through Christ.  And when we do so, we can truly begin to peel back the deception that can so often lead us to false conclusions about our status.

As Americans we truly are blessed, despite whatever circumstances in which we might find ourselves.  This is not to say that we must simply roll over and accept unacceptable scenarios including injustice.  However, we also should not become ungrateful for all the blessings that are available to us.  But when we are tempted to resort to the negative, we can always seek Christ’s strength to express the proper gratefulness, regardless of our circumstances.