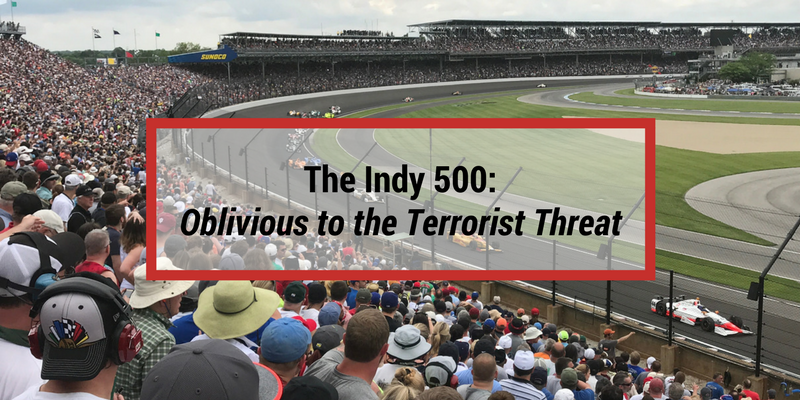 The Indy 500: Oblivious to the Terrorist Threat

Last week I wrote about my trip to the Indy 500 and the spectacular crash that happened when Scott Dixon’s car went airborne in the 53rd lap of the race.  In those few seconds that followed, Dixon’s life hung in the balance.  Thankfully, he survived.  Dixon’s walking away from the crash was due in large part to the months and years of purposeful preparation by his team, designers, and engineers.  They spent countless hours constructing a car that could withstand some of the most brutal crashes one can imagine.

If you’ve ever attended a race at the IMS, you know that you can often park a mile or two away.  You then make your way to the racetrack via quaint, all-American neighborhoods.  The thousands of houses that surround the speedway are typical 50+ year old houses, in bustling neighborhoods, often with small front lawns and yards with picket fences.  Most of the residents offer up their yards and front curbs for $10-$20 parking per car.  They all want a little piece of the half-billion dollars that flood into their community on what is undoubtedly the greatest motorsport weekend of the year in America.

As my friends and I drove to the race track Sunday morning, our spirits were high, but we were also anxious that the forecasted rain would hold off.  The clouds were ominous but the weatherman teased all the race fans with the potential that the rain wouldn’t appear until the last half of the race.  After finding a parking place a mile and a half away, we began our walk, along with hundreds of other race fans.  As we drew closer to the track, the hundreds turned to thousands and the Speedway facility rose into the sky in front of us.  Outside the track, people milled everywhere.  Backpacks, coolers, bags, raincoats and fanny packs were the norm.  The tens of thousands heading for the entrances had one thing in mind — an afternoon of speed, excitement, crashes, and cheering for their favorite driver.

We made our way to one of the dozens of entry points into the speedway and gathered in a line, expecting to endure the requisite security screenings that have become commonplace in sporting events since 9/11.  But as we met the IMS representatives checking our tickets and inspecting our belongings, we received a quick, cursory motion through.  I observed many race fans, before and after me, who had backpacks, coolers and bags, and the inspection of their items was also very superficial.  I spoke to another friend who entered at a separate gate who expressed the same shock over the aloof attitude of the personnel when he entered the gates as well. He was carrying a shoulder pack and the elderly lady didn’t even delve into his pack but just motioned him through with a “you’re fine!”

As I walked past security, I was instantly struck with the fact that not only was there no focused attention to what people were carrying into the venue, but I was also amazed that there were no metal detectors in place to at least catch any obvious weapons that someone might have on their person.  Even law abiding citizens with firearms concealed carry permits could have passed through the Indy 500 security that weekend. I shuddered to think how easy it would have been for a terrorist to have walked through with a host of weapons that could have caused indescribable tragedy.

Following the attack in Manchester a few weeks ago, I wrote about the repercussions of ISIS inspired attacks turning from bombs laden with nails to explosives laden with neurotoxins.  The Indy 500 last week represented a fertile and high valued soft-target for such weaponry.  Given that our terrorist enemies pursue not only death and destruction, but they also seek symbolism in their attacks, what better target could be found than the Indy 500, an American icon that draws the largest crowd of any sporting event in America?

So there is no question that security at the IMS was appalling.  I don’t want to pre-judge the owners and management of the IMS, but in this day of grave threats to the security of our nation, and an enemy that is increasingly looking for high profile soft targets, it’s inexcusable that the lives of 300,000 race fans was devalued so greatly at last week’s Indy 500.  The reason an attack did not occur last week, and dozens or hundreds of casualties did not occur, was not because of the extraordinary efforts of the IMS and their staff.  To the contrary, there was no terrorist attack despite the pathetic security.  I can only assume that those seeking the death of our citizens were simply not up to the task last weekend.  But must we wait for them to succeed before we get serious about security?

The MLB, NFL, NHL, and NBA all require metal detector screenings at all of their venues.  Additionally, coolers and large bags are not permitted.  Implementing just these two security standards at the Indy 500 would at the very minimum eliminate the likelihood that a would-be terrorist could exploit such a current vulnerability.

As we think of the crash that Scott Dixon survived, in the context of a terrorist attack, there are three aspects to Dixon’s walking away from his horrific crash that should be a part of the IMS security protocol.  They are:

There is no question that Indycar drivers, their teams and owners, understand the threat they face every time a driver strap into his car.  Death or serious injury is always lurking. The fact is, the last 100 years confirms that it’s not if you will crash in motorsports, but when.  And tragically, for some drivers it wasn’t if they would die, but when they would.  So the threat is real.

Because the sport understands the racing threat, they have prepared for it.  A few years ago, a crash like Scott Dixon’s would have undoubtedly ended the driver’s life.  Yet, with continued testing, refining, and perfecting, a crash that absolutely decimated the car Dixon was in, still enabled the driver to climb out and walk away.  I’m confident that Dixon, his family, team members and the entire motorsport world, would agree that whatever amount of capital was expended to prepare for the threat he faced, was worthwhile when the threat materialized.

Finally, because the Indycar series understands the threat, and continues to prepare for it, the vast majority of drivers in the league today walk away from horrific crashes.  The same holds true in NASCAR and other racing series.  Understand.  Prepare.  Survive.

But to date in our nation, I fear many, including politicians, business owners and even ordinary citizens do not understand the threat we face.  Sadly, tens of millions in America still walk around as if they are immune from terrorist attacks.  But Islamic terrorists are here in droves.  They’ve struck already.  And they will continue to do so, with greater regularity and intensity, unless we understand the magnitude of the threat.

So we must understand, but we must also prepare. I applaud President Trump for not only his understanding of the threat we face, but for his efforts to prepare our nation and cities for the threats.  Sadly, he is being handcuffed all along the way by dangerous, politically correct buffoons.  And mark my words, it’s just a matter of time before the roadblocks that have been thrown up to thwarts Trump’s efforts result in American lives being lost.  But then it will be too late and there will be no amount of course correction that will restore the lives lost because of ignorant and incompetent leaders.

Finally, we will only survive this threat if you and I personally and individually understand and prepare for the threat facing not just our nation, but us individually.  My home town of Chattanooga, TN was attacked two years ago by an Islamic terrorist.  Five Americans died and more were injured.  That’s too close for comfort.  But your city could be or will be next.  Will you wait until it happens or will you prepare for such a potential?  If you want to survive the unimaginable, like Scott Dixon did, then do like he did.

To do less is to gamble with your life and those you love. 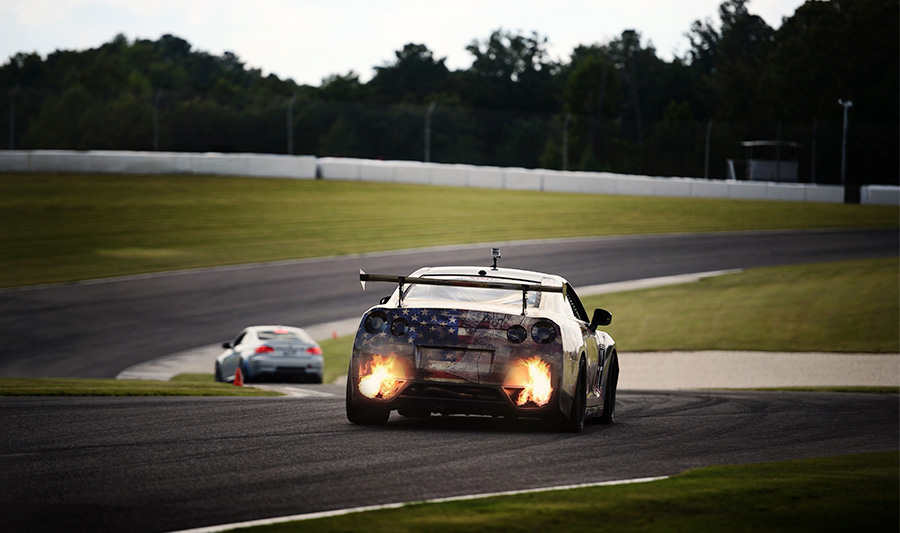 There’s nothing quite like the adrenaline rush of driving a car to its capabilities in the way they were meant to be driven.  Whether it’s the thrill of a standing start, catapulting from 0-60 in 3 seconds, or the g-forces generated when braking from 170mph to 60mph to maneuver a 90 degree left hand turn at Road Atlanta, the freedom of driving on a road course is just plain exhilarating.

Recently I was able to get the Liberty GT-R out at one of the great road courses in America, Barber Motorsports Park, a 2.3 mile track just outside of Birmingham, Alabama.  My good friend Chad Burdette with Chadbee Photography was there and took a number of photos of the Liberty GT-R.  I hope you enjoy them. 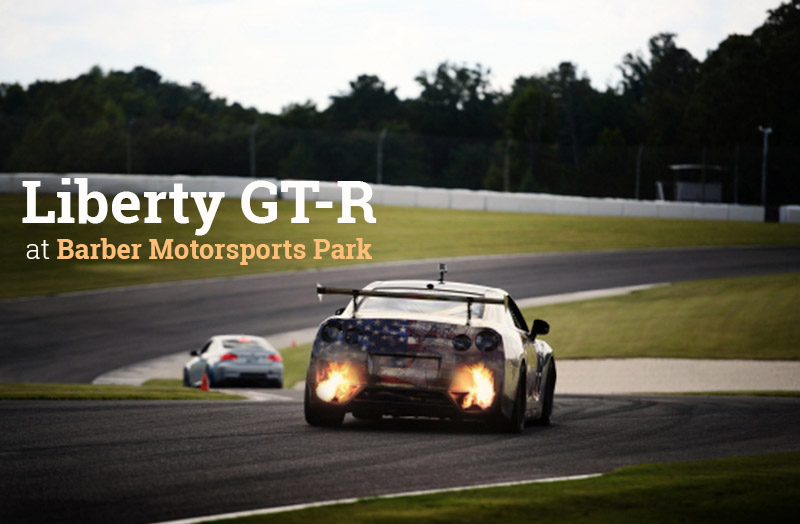 The video below is from a High Performance Driving Event at Barber several years ago that will give you the Point of View from a camera mounted on my helmet.  Enjoy!