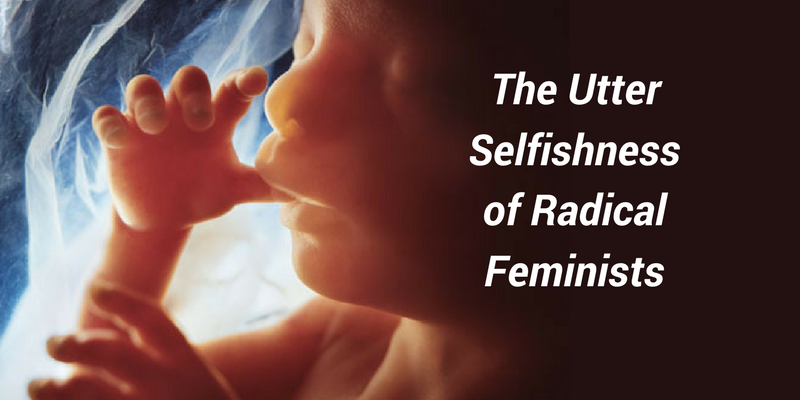 The Utter Selfishness of Radical Feminists

This last weekend, as tens of thousands of radical feminists marched in cities around the nation, their vulgar and “nasty” remarks received prime coverage by a media eager to feature their heinous and godless tirades. Their despicable comments were beamed to homes and mobile devices everywhere.

The profane shouts and signs of these self-oppressed radicals, declared their bodies were their own, and that government should keep its hands and policies off of their sacred reproductive organs.  With clenched fists to the sky, these women affirmed to the world, and even to God Himself, that their bodies were sacrosanct, and that NO ONE, could, should, or would diminish their “women’s rights!”

But what struck me was the utter selfishness of these radical feminists.  It was on full display for anyone honest enough to acknowledge their despicable self-absorption. As a godless media deified them, these radicals felt no shame in their self-exaltation.

Lost in all the rancor, protests, profanity and threats though, were the feminists’ lies. Also missing was one glaring truth.

The radical feminist’s message could not be more aptly illustrated than with these tragic feminists’ attitudes (where “My” is the feminist and “her” is the innocent child in the womb):

“My body supersedes her life…”

“My career displaces her future…”

“My freedom destroys her existence…”

This selfish, morally debased, and evil philosophy is what permeates the radical feminist movement.  These feminists’ rabid torrents of anger are the antithesis of what God designed and ordained in the beginning.

Sadly, the vile beliefs of these rabid feminists assault the tender sweetness of those that are disparaged in the debate.  The innocence of these children emanate from:

The smoothness of her soft, untainted features and delicate skin.
The sweet sounds of his new lungs as he inhales the breath of life for the first time.
The tenderness of her astonished cries as she leaves the warmth and security of her mother’s womb.
The fragility of that little child, who only desires the love and care of the one who chose to conceive him.
The very image of God, implanted in her DNA.

But tragically, the little ones whom Jesus blessed as “the least of these” are the very ones that tens of thousands of angry, abusive, blustering feminists will continue to condemn to a trash bag, incinerator or some Frankenstein-type “health-care experiment.”

What has been merely a “choice” to millions over the last 34 years since Roe vs Wade, has been a tragic death sentence for more than 55 million innocent children.  It is a scourge of a nation that has turned its back on what God loves.

As Jesus hung on the cross, presenting His innocent life as a sacrifice for all, His death was the ultimate example of selflessness. He gave His perfect, sinless life in death, in order to offer life to all of sinful mankind.

Tragically though, the polar opposite of that selfless sacrifice by Jesus, is the abhorrent selfishness that is exemplified by radical feminists. In the name of choice, they will continue to demand “reproductive rights” and “equality”— their unacknowledged code words for snuffing out the lives of those they deem unworthy of life.

Over the course of one week, the despicable acts and philosophy of the pro-death feminists will be juxtaposed with the peaceful and loving throngs of pro-life supporters, who will march this Friday, seeking merely to bring an end to the murderous act that was legalized by Roe v Wade in 1973.  There could be no greater contrast in the messages of these two groups than the feminists versus those who are pro-life.

And there is no greater disparity between life and death, as God reminds all of mankind:

“I have set before you life and death, blessing and cursing; therefore choose life, that both you and your descendants may live.”

May our nation, and our people come to our senses and move diligently to protect the most innocent and fragile, and in so doing, may we find the mercy and grace that only a sovereign and forgiving God can extend.