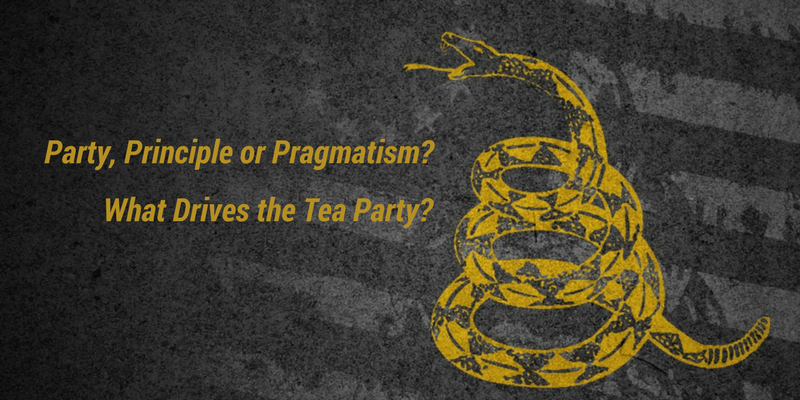 Party, Principle or Pragmatism? What Drives the Tea Party?

With the inauguration of our new President just hours away, our nation is approaching new, unchartered water.  Of course, the same could be said of the era we were entering eight years ago. But just as there were troubling reasons why Obama was elected then, so there are gnawing explanations as to why Trump was elected in November.

As George W. Bush was quick to sacrifice many of the values that historically characterized conservative orthodoxy, his popularity plummeted and contributed to the election of the most “progressive” President to ever lead our nation. And with the election of Barack Obama, the political polarization that gained steam during the Bush years skyrocketed under Obama.

But as Republicans over the last eight years continued to say one thing and do another, particularly when they controlled both houses of Congress, voters grew more and more frustrated with the Party of Lincoln.  Consider that while there were 17 Republican candidates for President, ultimately the 16 “Party-faithful” candidates were rejected in favor of Trump, someone whose political credentials were questioned by many.  One could ask then whether the victory in November was that of a Party or a personality?  And will the coming Trump era see Party, Principle or Pragmatism prevail?

As someone who has consistently voted for Republican candidates, I have always favored principle over party.  So in 2009, as the tea party movement was launched, I took an active role, with millions of other Americans, in expressing my grievances with both parties. Since then, while certainly much of our movement’s protests were focused on Obama’s policies, a considerable amount of our ire was directed towards Republicans as well. The party of conservatism had, for the most part, lost its compass.

But then Trump appeared.

The truth is there is little evidence that Trump is a conservative Republican, in the purest definition.  Not only does his multi-decade track record affirm this reality, but many of the policies he campaigned on are at odds with long-standing Republican positions and orthodoxy.  I won’t take the time to recite the myriad of examples but these articles here and here reference several of his most glaring departures.

What we do know about Trump though, is that since his Presidential announcement in June 2015, the billionaire candidate attracted:  1) Republicans disgusted with the Republican Party, even though they had consistently supported the GOP, and
2) Democrats tired of the failed policies of the Democratic Party, for which they had voted for in prior elections.

So with Trump’s rise to the Presidency we witnessed a powerful new constituency, the Pragmatic voter. No longer was Party the driving factor for many. Nor was Principle the overriding variable for others. Rather, Pragmatism ruled the day.

But with the election now over, and Trump stepping forward to lead, versus merely tweet, his words will soon morph into policies, laws and regulations. As this occurs, it will be telling to see if the millions of voters who supported Donald Trump will remain enamored, enthused and engaged.

More specifically though, I am eager to see how tea party members will respond to our new President. As a movement that has for the most part been known for its allegiance to Principle and the Constitution, will its members continue to overlook Trump’s policies that might violate both?  Will the tea party devolve into simply a pragmatic political force?  Or will the movement that became the rallying cry and impetus for one of the greatest political victories in the modern era, embrace the spirit of the original Tea Party in 1773, standing on principle first and foremost?

“On matters of style, swim with the current, on matters of principle, stand like a rock.”  Thomas Jefferson