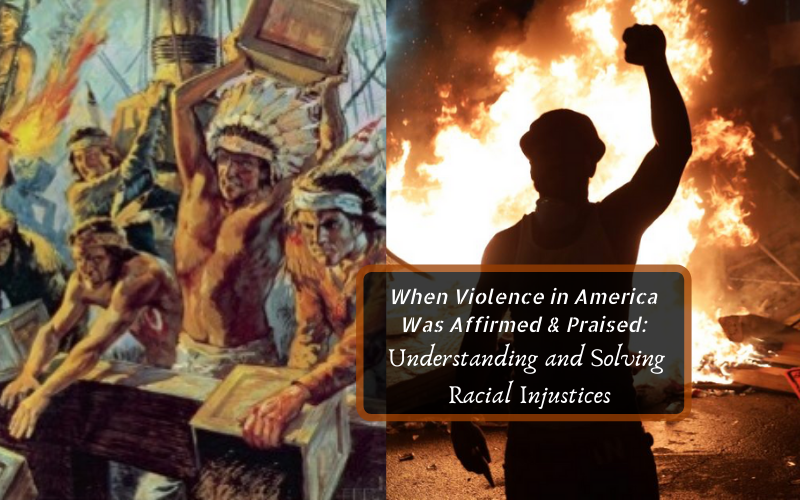 is another man’s just war.

First, let me say I DO NOT condone the rioting and violence that is occurring across our nation, following the murder of George Floyd at the knee of white police officer Derek Chauvin.  As someone who values that Jesus taught us to “turn the other cheek” I believe there are other ways we must respond, even in the face of gross injustice.  But I also understand that not everyone embraces Jesus’ teachings or His example in this regard, and even if we do, we can all become overwhelmed at gross injustice and feel like our only responses to such are protests and/or violence.

Last night I broke a long standing rule I placed in effect several years ago, and I watched the news for a couple hours, viewing the rioting and protests Live as they were happening.  In the two cities I watched, Washington DC and NYC, the vast majority of the protesters/agitators were WHITE, not black.

As I watched the rioting, one announcer made the point that our nation’s founding flowed out of the violent responses of its citizens to unjust laws by its government.  Most white Americans celebrate and applaud our nation’s founding fathers who rejected authority, and fought back, violently, to protest and overthrow an unjust government.  The Boston Tea Party was one such rebellion. I should note that the organization I founded eleven years ago in Chattanooga, took its name from that act of rebellion and violence.

When I led the Chattanooga Tea Party for nearly a decade (which I no longer do, and I no longer consider the Tea Party movement to represent me), I and other leaders often took solace in these words that were integral to our nation’s founding:

“…whenever any Form of Government becomes destructive of these ends (Life, Liberty, and the pursuit of Happiness), it is the Right of the People to alter or to abolish it… But when a long train of abuses and usurpations…reduces them under absolute despotism,  it is their right, it is their duty, to throw off such Government…”

While our organization, and none of the other liberty movements I was associated with, ever took up arms, or resorted to violence, I can assure you that there were many in the movement who were more than prepared to resort to violence had the government stepped across an imaginary line.  If you doubt this, then explain why it was that gun purchases were skyrocketing during those years?  The consistent interpretation that conservatives held was that the 2nd Amendment was not for hunting or sporting but was to protect oneself from a wayward and unjust government.  Let’s also not ignore the fact that even now in 2020, white men armed with assault rifles and other threatening armament have recently been marching into state capitols around our nation.

But back to violence in our protests.  Let me reiterate that I do not condone or agree with the violence we are seeing erupt across our nation.  As a Christian, I believe we are called to love, peace, and humility, and when others persecute us, our response should be identical to that of Jesus, and the twelve apostles.  None of us will ever be as violently persecuted as the Founding Fathers of Christianity (where all but one were martyred for their faith; that is the most extreme form of prejudice one can imagine).  And yet, not one of them responded violently.  This is the model every follower of Jesus should strive to emulate in our lives.  It’s a high bar, which I struggle with personally, in the face of injustices.

As we watch and condemn what is going on, what would we have said if we were viewing the protests at the Boston Tea Party?  While there are significant differences between the two, there are also many similarities, including injustices by those in authority and with power.  So ask yourself, “What would I have done or said, if I was alive on December 16, 1773, viewing the violence of the Boston Tea Party?  Would I have condemned it or embraced it?  Would I have participated in it?”  Today, most Americans praise this act of violence and rebellion, that destroyed a million dollars worth of property.

My intent for sharing these thoughts is not to provoke anger or incite emotions.  Rather, it is to challenge us to stop and think; to put ourselves in the shoes of others.

When we judge a person simply by their external actions, we either condemn them or we embrace them, based on the cause they are fighting for.  If their protests and even violence affirm our worldview, then we gladly applaud them.  However, if their protests and violence are at odds with anything we’ve ever experienced, then it’s likely we will condemn them and find cause to belittle and hold them in contempt.

If we are white Americans, it’s likely we’ve never felt that our life was hanging in the balance when we were pulled over in our cars by a police officer.   But many of my African American brothers and sisters have always carried such fear with them.  But not only is that fear for themselves, but for their children and grandchildren also.  Thankfully, I’ve never known that fear personally, or for my children. But it grieves me to realize that millions of our citizens do, primarily because of their skin color.

Think about that.  Then consider that there have been a “long train of abuses” in the eyes and experiences of our black brothers and sisters.  Their life is not ours.  So until we can figuratively place ourselves in their shoes, we cannot fully comprehend the struggle, the outrage, and the deep rooted hurts they feel each time another man with black skin dies, whether at the hands of someone in uniform, or by a white man in the back of a pickup truck, or a false accusation is called in to 9-1-1.

So what are the solutions to this existential threat to not only the future of our nation, but more importantly to the relationships we should seek to grow with those who are different than us?

I believe first and foremost the solution is Spiritual.  The center of this struggle is not in the streets of Minneapolis or other cities, but rather in the center of our beings: Our Heart.  God says in Jeremiah 17:9 that “the heart is deceitful above all things, and desperately wicked, who can know it?”

Even now, it’s possible that your response to my meager thoughts is one of outrage or rejection or condemnation.  If so, I believe its possible your heart is deceiving you.  Within each of us lies the potential to deceive ourselves into believing the problem is “the other guy; it’s not me.”  If that’s my response, I am deceived.

Jesus said in John 8:7 “let the one who has never sinned throw the first stone!”  He also said in Matthew 7:5 “First get rid of the log in your own eye; then you will see well enough to deal with the speck in your friend’s eye.”

The point is, introspection is needed, first and foremost.  What part have I played, overtly or covertly, in contributing to injustices in our community or nation?  If you say none, then I applaud you and I would suggest you write a book so we can all learn from you. And there is no need to read further.  But if you feel any need to continue to examine yourself, here’s what I would suggest is next.

Because the heart, the inner core of our being, is deceitful and wicked, we must regularly cleanse it.  This cannot be done overnight but requires a continuous effort to transform what is natural (those responses that are wrong) to the unnatural (those responses that are Christ-like).  The only way to do this is through a consistent time in God’s Word.  We read this in Romans 12:2:

“Don’t copy the behavior and customs of this world, but let God transform you into a new person by changing the way you think. Then you will learn to know God’s will for you, which is good and pleasing and perfect.”

As we begin to transfuse our minds with the healing power of God’s Word, our values, thoughts and behavior will be transformed.  Recently I read a short Bible Plan in the Bible app entitled “How to Love People You Disagree With” and it included these thoughts:

… chose not to be offended?

… we quit taking everything so personally?

… we changed the degrading way we talk to others?

… we focused on what we did have in common?

… we chose the big picture?

And I’ll add, what if we “loved our neighbor as ourselves?” which Jesus reminded us is the second greatest commandment.  These are a few of the fundamental behavior changes we must pursue.

Nearly a year ago, God led my path to cross with someone I had known for years, but never developed a close relationship with.  Ternae Jordan is an African American pastor in Chattanooga whom God intentionally brought me to, so that God could begin to incorporate the above principles in my life.  As we’ve spent dozens and dozens of hours together since last summer, my heart has softened as I’ve been able to, in a small way, “walk in his shoes.” Beginning to realize and better understand the dreams, hopes, fears, and frustrations that my brother and his family and friends experience, has softened my heart, and changed my thoughts.  I’m eternally grateful for Ternae, and as I think of what God has begun in our lives, I’m reminded of this verse:

“And I am certain that God, who began the good work within you, will continue his work until it is finally finished on the day when Christ Jesus returns.” Philippians 1:6

In closing, while the solutions are not that complicated, they are also not that easy.  Cleansing our heart (seeking forgiveness and transforming what we think and believe), changing how we habitually behave and respond, and walking in someone else’s shoes, none of these are natural.  But the history of our nation reveals that what is natural is not working.  So perhaps if followers of Jesus across this land began to pursue supernatural answers to the age old scourge of racism and prejudice, we might begin to see a mighty work of God in our midst.  And as we do, I’m hopeful that God will bring about healing and unity, to what has been hurt and division for more than 200 years.

Addendum: Verses to consider as we seek to “Love our neighbor as ourselves:”