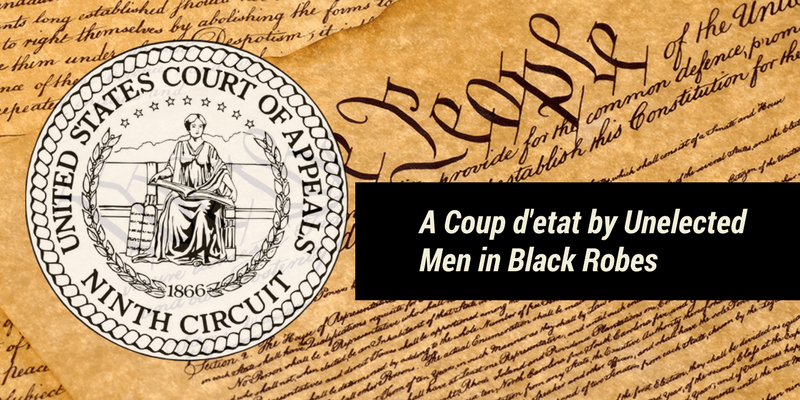 A Coup d’etat by Unelected Men in Black Robes Our nation has been deeply divided for some time and that division is growing even deeper. Much of this division has occurred because our political leaders have untethered our laws, policies and regulations from the law of the land, our Constitution.

But as bad as this rejection of our Constitution has been by Congress and the President, We the People have still possessed the ability to hold our politicians accountable to our founding document and principles, every two or four years.

But there remain two threats to the rule of law beyond the Executive and Congressional branches.  One obvious.  Another not so.

In many banana republics around the globe, cruel and unjust dictators are oftentimes deposed via a military coup d’etat — an armed overthrow of a government.  It’s interesting to look at the meaning of this French word.  According to Wikipedia, coup d’etat is sometimes translated as “blow of the state” or “hit of state” but the literal translation is “stroke of the state” — as in the wiping or stroke of a sword.

To date our nation has never faced a military coup d’etat.  This first threat, while a potential, has never been considered a likely one in our Constitutional Republic.

The second threat though, is not only a real one, but this week it was realized.  No shots were fired.  No swords were drawn.  But as the definition of coup d’etat makes clear, a “blow to the state” took place when unelected citizens in black robes thumbed their nose at the Constitution and law and figuratively arrested America’s duly elected President, placing legal handcuffs on the authority he clearly possesses.

The Ninth Circuit Federal Appeals Court circumvented well established law and precedent that affirmed the authority of President Trump, in his position as Commander in Chief, to administer the immigration laws of our land.  One such law, the Immigration and Nationality Act, states in Section 1182(f):

The net effect of the courts decision was that these three unelected judges wrestled the authority for the safety of our citizens from Trump with the stroke of a pen.  Sixty-three million citizens elected Donald Trump to protect our nation from a clear and present danger stemming from the loose and dangerous refugee immigration policies of the Obama Administration.  The danger posed by radical Islam has been unleashed time and time again in Europe and America over the last couple years.  But the court’s decision undermined a duly elected President and left him powerless, for all practical purposes.  At least for the time being.

With the stakes growing ever higher, and the willingness by the left to embrace whatever tactic they can devise to block Republicans from governing, rest assured that nothing will be left off the table.  Whether it’s the riots and violence in the streets as I wrote about earlier this week, the abuse of long established rules in Congress, or the seizing of authority by the judicial branch that it does not possess, there will be no end to the intimidation, abuses, and other nefarious activities by Democrats and their allies.

And it will only grow worse as unelected and unaccountable men in black establish their superior rule… from the bench.