Celebrating Independence Day… But Are You Free? 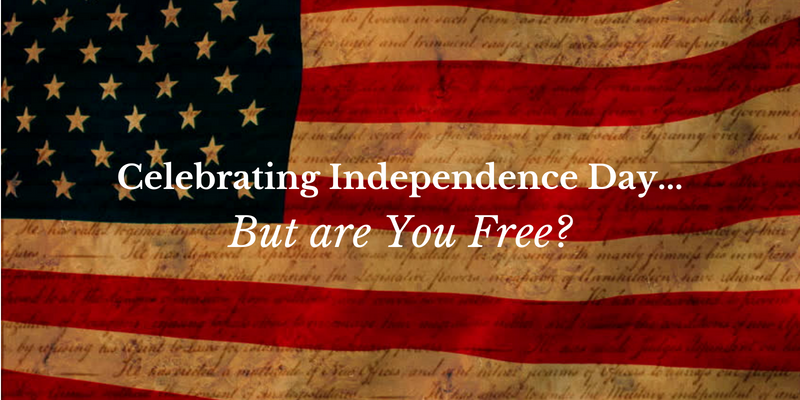 It’s July 4th. Again. Every year this day rolls around. And as Americans we relish the privilege to celebrate the day our nation declared its independence from an oppressive master. It was a momentous day. But that first day in 1776 wasn’t the end of the struggle. Rather it was merely the beginning.

What that declaration launched was not an easier life, but in many ways a more difficult one. Freedom does not just happen. No, freedom demands an extraordinary price. That price can even require one’s life. But even if freedom does not demand the ultimate cost, it will still require an extreme sacrifice, if it is to be kept.

As I’ve thought about these truths, relative to our nation and our freedom, there are so many parallels to the Christian life. All of us are born into bondage, and our master from the time of our birth was an opressive, evil one. His dominion extends around the world as he has enslaved the masses since the beginning of time. The price he demands is greater than a portion of your earnings, or even your firstborn. This master demands your very soul.

But, we have a Founding Father, who penned His own Declaration of Independence 2000+ years ago. He sealed  His Declaration with his blood. This new Master, known as the King of Kings, is a benevolent king. He is a just man. He is a loving ruler.

But as any Master, this Lord of Lords, also demands our all. He does not accept second place. He does not allow His followers to ignore His requirements. But because He was once just as us (but without sin), He understands our weaknesses and He promises to strengthen us in our time of need. He will be with us, when the evil master and his minions seek to pull us back into their dark dominion. Our King of Kings will walk with us, even in the midst of the fiery trials in our lives.

So as we celebrate America’s Independence Day again, how many more July 4th’s will you celebrate? Could this be your last one?  Could it be mine?

But more importantly, have you embraced the eternal Declaration of Independence that was authored when God’s Son, the Prince of Peace, hung on the cross, bore your sins and mine, defeated death, and rose again?  Jesus’ death for you and me is the only way we can have true independence from the grip Satan has on all of mankind. But we must embrace Jesus as our Lord, Master, and Savior by acknowledging our own sinfulness and need of Him.

Embracing Jesus is the most important choice you can ever make. And if you chose Jesus this July 4th, you will eternally remember our nation’s birthday as the day you were born anew.