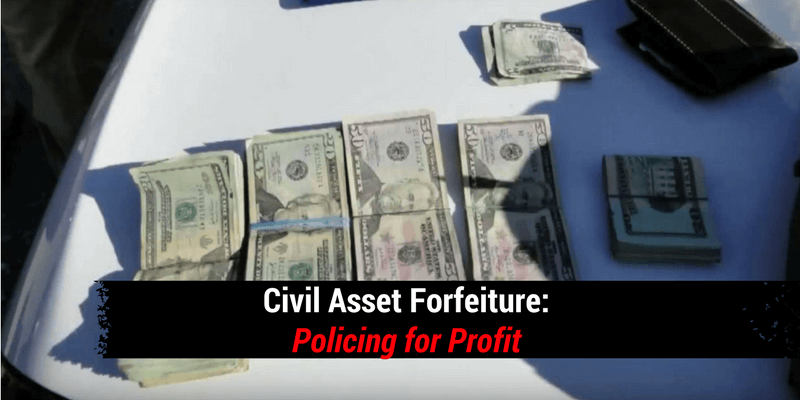 Imagine for a moment you are driving down the highway on your way to purchase a car in a town half-way across the state.  You are excited to pickup the slightly used, sporty convertible for your spouse as a birthday gift.  Because it’s a weekend, banks are not open, so you are carrying a substantial amount of cash to be able to pay for the car on the spot.  It’s the only way you can take the title for the car with you when you purchase it.

All of a sudden you see blue lights in your mirror.  You had your cruise set on the speed limit of the rental car you’re driving, but even so, your pulse quickens. You know you are doing nothing illegal, but just being pulled over causes you some anxiety.

As you pull to a stop, the officer exits his car and approaches your vehicle.  He asks for your drivers license and registration.  You provide your license and the paperwork for the rental car.  (You planned to drop off the rental car in the town where you’ll pick up the convertible.)  As the officer returns to his car, you’re uncertain why you were pulled over.  Unbeknownst to you though, apparently your vehicle marks the description of an alleged drug dealers car about which the police received a tip.  But they have mistaken you for him.

When the officer returns, he asks you if you have any large amounts of cash in your car.  Being honest, you acknowledge you do.  He then asks you to exit the car and begins to search the car.  Upon spotting the cash in the middle console of the rental car, he takes possession of the cash and all of a sudden, what was to be an exciting afternoon of driving a convertible back on a sunny, mild spring day has become your worst nightmare.  There will be no convertible in your future this day.  And the large amount of cash you were carrying has been confiscated.  Who knows whether you’ll ever get it back.   A scenario very similar to this occurred right here in Tennessee as reported in this short investigative video.

Civil Asset Forfeiture (CAF), also known as “policing for profit” is an unconstitutional scheme that allows police to seize assets that they allege were involved in a crime and then keep or sell those assets.  The owners may or may not be charged with a crime themselves but their assets can be retained by the police.  The state of Tennessee has sanctioned this unconstitutional activity and some police officers (not all) are abusing this “legal” practice.  Regardless of their motivation though, it’s something that should change.

CAF allows law enforcement agencies to confiscate private property from unsuspecting citizens on just the mere suspicion that a crime has been committed. That agency then uses the confiscated money or property to supplement their department’s budget.  An officer doesn’t need to write a ticket or arrest the subject, and the accusation doesn’t have to be specific.  All the officer needs to do is give the subject a receipt for the confiscated property to comply with state law.  If the citizen resists the confiscation of his property, the officer can then arrest him and take him to jail, for resisting a peace officer.

Simply put, the officer can make an on-the-spot personal decision that whatever a citizen has in his possession was obtained from the commission of a crime. For instance, if a young man with long hair is driving a new Lexus, the officer can confiscate the vehicle if he merely thinks the car was purchased with drug money. No proof is needed, and the victim will never be arrested or prosecuted, let alone convicted of a crime. That citizen will simply lose his property. Being innocent until proven guilty is turned upside down with CAF.

Sadly, I’m not describing Nazi Germany, but rather it’s happening today in America as reviewed in this article from Institute for Justice. (By the way, Trump’s new Attorney General Jeff Sessions is a full supporter of CAF as a tool for fighting drug trafficking.)  The problem is, there has never been a distinction made between innocent civilians and drug traffickers, and CAF makes no allowance for Due Process as guaranteed by our Constitution.

This abuse of power has been going on for quite some time. It is a flagrant violation of the Fifth and Fourteenth Amendments of the U.S. Constitution, and Tennessee is among the worst abusers of this tactic as revealed in this article “Police Officer Pockets $6,000 From People Who Had Their Cars Taken Through Forfeiture.”  Although this practice has been used for some time under the guise of fighting drug traffic, there has not been a serious effort to put an end to it.

Until Now.  Thankfully, there is a bill in the Tennessee state legislature that seeks to address this abusive practice.

Tennessee HB0421 and SB316 have been introduced by Representative Martin Daniel and Senator Todd Gardenhire respectively.  The bills are an effort to end this unconstitutional practice.  (The bill summary is below.) The House Bill is due to be heard in the House Civil Justice Subcommittee on March 1st.  It’s well known that law enforcement will have a heavy presence at the hearing in an attempt to defeat Daniel’s bill.  It is important to offset their influence before the committee convenes.

The six video links below, each about six to nine minutes long, are the result of a multi-year investigation by Channel 5 from Nashville. Watch them and you’ll see senior Tennessee law enforcement officers, including a District Attorney, justify the unconstitutional practice of CAF.  A warning though, these videos may make your blood boil.

Below the video links is a list of the Tennessee House Civil Justice Subcommittee members, including the Chair.  If you live in Tennessee, please make a quick phone call to each member and simply ask them to Support HB0421.  And if you can also send an email, asking them to do the same, that would also be helpful.  These committee members need to hear from you and me.  (If you don’t live in Tennessee, I would encourage you to do some research to determine where your state stands on CAF.)

Without hearing from citizens, our legislators will assume that voters approve of law enforcement’s practice of unconstitutionally confiscating private property.

There is an effort to travel to Nashville March 1st to attend the Committee hearing. If you would like to go, please let me know and I’ll provide you with more info.

As introduced, establishes a new procedure for the seizure and forfeiture of assets as the result of criminal activity; requires conviction for the underlying criminal conviction before forfeiture can occur; requires clear and convincing evidence that the property is subject to forfeiture; and provides that all forfeited or abandoned money be deposited in state general fund and all property forfeitures be sold and the proceeds go into state general fund. – Amends TCA Title 39; Title 40; Title 53 and Title 55.

Thanks to Steve Osborne, Chairman of the Sevier County Tea Party for his contribution to this article.

A Party’s Willing Suicide & Those Who Pulled the Trigger
Election 2016: The Most Critical one of Your Lifetime?
A Message to Our Newly (Re)Elected Officials: You Won! Now What?