Daniel, Government, God and You 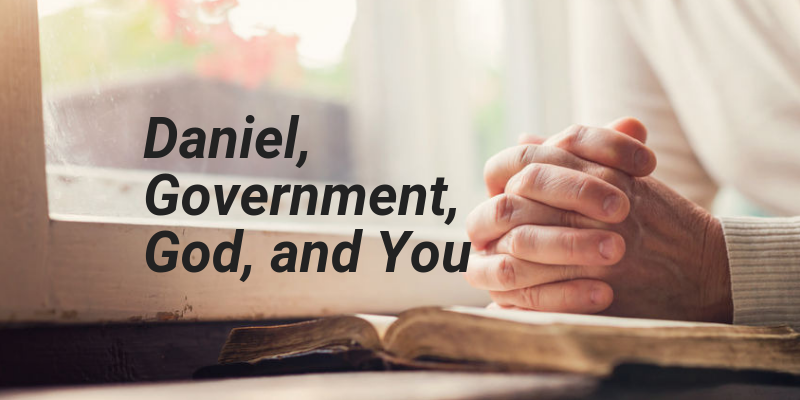 The book of Daniel in the Bible contains many examples of how a follower of God should comport himself in the midst of a culture or nation that is at odds with God’s values.  Here are a few lessons we can learn.

Of course there’s the familiar story of the three young Hebrew men, who were also government officials. When they were commanded to bow to a statue of the king, they refused to do so, even though it would result in a fiery furnace, from which they were miraculously rescued.

And then there’s the story of Daniel who, as one of the highest government officials in the land, was asked to interpret a dream for the king. Recall that Nebuchadnezzar’s dream revealed the king’s haughty and prideful spirit and predicted his downfall. Although there was tremendous risk on the part of Daniel in rebuking the king, Daniel did not falter in speaking truth to power, and Daniel challenged King Nebuchadnezzar to change his ways (which the king ignored).

Several years later, various government officials sought to persecute Daniel, who reported directly to the king. Daniel was equivalent to the Prime Minister of the nation. The only way these scoundrels could achieve Daniel’s demise was to attack his religion directly. Note what they concluded:

“Our only chance of finding grounds for accusing Daniel will be in connection with the rules of his religion.”  (Daniel 6:5)

And so they made sure that laws were passed that would be in direct violation to the religious values by which they knew Daniel lived. Sound familiar?

So they outlawed prayer, to any god except the king.

But notice how Daniel responded:

“But when Daniel learned that the law had been signed, he went home and knelt down as usual in his upstairs room, with its windows open toward Jerusalem. He prayed three times a day, just as he had always done, giving thanks to his God.” Daniel 6:10

Daniel not only ignored the law, but he did so publicly, with his window open so that there would be no doubt about whom Daniel would obey.  You’ll recall that the rest of this story involved a lions den, God’s miraculous deliverance, the defeat and death of Daniel’s adversaries, and a proclamation from the king affirming Daniel’s God as the one true living and eternal God.

So, you may say, “Yeah, I know all those stories but what do they have to do with me?”

The book of Daniel is not just full of a lot of cute bed time stories. Rather it is a book with deep, powerful truths, with principles that apply to the very era in which we a living.

Our culture and government is no longer friendly to Biblical values. In fact, whether it’s a school board, or a city, state or federal government, or agency, the antagonism and animosity towards Christians and the values taught by Jesus are under vicious attack… and it will only grow worse.

If you are a government official or employee who claims to follow Jesus, you have been or will be called to make a choice, when man’s laws and regulations conflict with God’s laws and values. (Remember Kim Davis, the county clerk in Kentucky who refused to issue marriage licenses?)

But most of you are private citizens so you may say, “I’m exempt” from having to make such a choice. But don’t be deceived. Your day is coming… or is already here.

If you own a business, and attempt to abide by biblical values, there is a bullseye on you and your business.  (Remember the cake maker, photographer and florist who were singled out and attacked for their Biblical beliefs?)

If you’re not a business owner, you have been (or will be) confronted with a myriad of choices, whether it’s your kids’ education, how your tax dollars are used, your selection of political candidates that may not affirm biblical values, and a host of other choices. (Remember the coach who was recently attacked for his decision to pray with his team?)

But first, will you and I even recognize it when we are confronted with these choices?  And secondly, will we cave under pressure, or will we follow the examples from Daniel?

In the final moments of the life of Joshua, we see this great warrior for God and hero of our faith presenting his nation and fellow citizens with this choice:

“But if you refuse to serve the Lord, then choose today whom you will serve. Would you prefer the gods your ancestors served beyond the Euphrates? Or will it be the gods of the Amorites in whose land you now live? But as for me and my family, we will serve the Lord.” Joshua 24:15

Who will you and I choose?  The god of our culture or our government?  Or the God of the Ages, whose values and truths never change?

Finding Men to Match our Mountains
A Day to Save Life or Destroy it?
The Virus of Racism. Will Pride Prevail or Love Heal All?