Should a Christian Vote for the Lesser Evil? 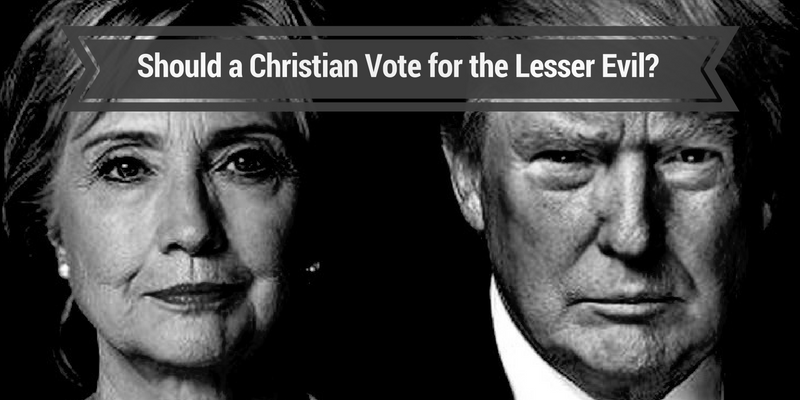 Over the course of my years of engaging in politics, I have often heard the phrase “the lesser of two evils” used about the choices offered up to voters.  But never has that phrase been used more than in the 2016 election.  One wonders if all the “lesser evil” choices of prior elections have ultimately culminated in the two worst choices of our lifetimes?  Time will certainly tell.

As I’ve witnessed the ongoing debate on the Republican side of the discussion over Donald Trump, supposedly the lesser evil, I have seen two arguments arise.  The #NeverTrump side asserts that they must follow their conscience, drawn from a biblical/absolute moral standard.  The other side argues that in doing so, one would invariably allow a greater evil, in this case Hillary Clinton, to prevail in our nation.  This second group asserts that selecting the “lesser evil,” in this case Trump, is a better choice, even a good choice, because it would lessen or slow the advance of evil.

Let’s assume, for the sake of argument, that under a Trump administration, evil would in fact advance at a slower pace. If that were true, then is a vote for someone who has a lifetime of the behavior below someone a Christian should vote for, regardless of the evil character of the other option?

Rejects his need of God

Acknowledged his propensity to prey on women, including those married

And so much more…

To be clear, as I enumerated Donald Trump’s behavior, lifestyle and choices, I struggled doing so.  The struggle was not because I was unsure as to whether those things are morally reprehensible.  Rather, I struggled because I too am a sinner and were my life laid bare, there would no doubt be many choices of which I would be ashamed.  So I do not enumerate Trump’s choices and lifestyle to suggest I am better.  However, there is a distinct difference between Trump and someone who embraces the Christian message.

A true Christian acknowledges his sinful choices and routinely seeks God’s forgiveness for his actions that violate God’s standard.  And because his faith rests in the shed blood of Jesus Christ, he has forgiveness from God, because of the death and resurrection of Jesus, the Son of God.  So repentance and forgiveness are key to a Christian’s relationship with God.

When Trump was asked in 2015 about whether he had ever asked God for forgiveness, he stated the following:

“I am not sure I have.  I just go on and try to do a better job from there.  I don’t think so. I think if I do something wrong, I think, I just try and make it right.  I don’t bring God into that picture.  I don’t.”

I do not share this to condemn Trump but merely to explain the man.  With a philosophy as Donald revealed, it is no wonder that so many of his choices are immoral.  But worse, it does not appear that Trump sees any need to correct or improve on his degenerate behavior. To be fair, in the last few months, there have been unsubstantiated reports that perhaps Donald has turned to God.  I can only hope and pray that this has in fact occurred.  If so, it would be an earth shattering development that could at the very minimum eternally secure the soul of Donald Trump.

But back to the original discussion.  Is Donald Trump someone a Christian should vote for, simply because he is the “lesser of two evils” in the minds of some?

In tandem with that question though, and perhaps of greater importance, is this question:

In a world of lesser evils, are God’s principals universal?

We can no doubt find countless examples of choices that are both evil, but one is lesser.  So what should a Christian do in these instances?

In America we are sheltered and removed from the reality of the rest of the world.  But for too many Christians around the world, the lesser of two evils is a dramatic reality, and results in their rejecting both options.

Take for instance the runoff election in 2012 in Egypt that pitted the Muslim Brotherhood candidate, Mohamed Morsi against Ahmed Shafik, a holdover from the former strong-armed President Hosni Mubarak.  If one delves into the backgrounds of both of these men, and what they supported, there can be no doubt that their views, values and track records were at extreme odds with biblical values.  So in that instance, should an Egyptian Christian have selected a Muslim, tied to a former dictator, or should the Christian have chosen the second candidate, someone who is a member of the Muslim Brotherhood, a known terrorist group?  Neither choice is a good one.  Truthfully, they are both evil.

God’s standards and principles must be universal and timeless or they are not of God.

As Americans, and Christians specifically, have continued to chose “the lesser of two evils” over the years, we have seen the quality of the candidates continue to degenerate.  This approach has led us to the point where in 2016, the two major options presented to Americans are the two most debased and immoral options perhaps our nation has ever seen.  But rest assured, if Americans willingly, and in many cases gleefully, select one of the two options, you can be confident that the choices that will presented in 2020 and beyond will be even worse.  Contrary to the theory of evolution, things do not naturally get better.  Rather, it’s clear that the world is continuously devolving, absent God’s intervention through spiritual revivals.

So, what should you do if you are a person that has a gnawing feeling that something is not right? Or perhaps you have a quiet voice pricking your conscience to reject both Donald Trump and Hillary Clinton, even though your human logic or friends suggest that Trump would be better because he will do this or do that.

If this is you, then I would encourage you to turn to God.  As a believer, every consequential decision in your life should have a foundation in and be supported by God’s Word.  If not, then question that decision.  So if you are a follower of Christ, consider these passages, pray earnestly and seek God’s direction on November 8.

“But know this, that in the last days perilous times will come: For men will be lovers of themselves, lovers of money, boasters, proud, blasphemers, disobedient to parents, unthankful, unholy, unloving, unforgiving, slanderers, without self-control, brutal, despisers of good, traitors, headstrong, haughty, lovers of pleasure rather than lovers of God, have a form of godliness but denying its power.  And from such people turn away!”  2 Peter 3:1-5

Do you feel powerless?  Do you feel anger and even hatred perhaps?  Is your mind clouded?  If you answered yes to any of those questions, then perhaps fear is motivating you.  Turn your attention back to God, particularly in this election cycle.  Trust Him.  Refuse to succumb to your own logic.  And God will direct you to the proper choice in just a few days.

It may be that God is leading you to reject both candidates and to either not vote, or to select one of the 3rd party or independent candidates.  Life is not about winning, in a worldly sense, but about doing what is right from a divine perspective.  Personally I find both Trump and Clinton objectionable, one perhaps more than the other, but both a shame for a country that was founded upon biblical principles.  So I have been challenged to pray for Trump and Clinton.  That I can do.

In my next blog post later this week, I will provide my thoughts on what to do if, like me,  you cannot vote for Trump or Hillary.  Rest assured there are other candidates that, while they will not win politically, they will provide you with the option to follow your conscience in a way that reconciles with Scripture.  And when you do this, I would suggest that you have won in a manner that trumps any American political battle.  (Here’s the post:  If You Reject Hillary & Trump, Here are Some Options)

Obviously, my thoughts  are not the “final word” on this subject matter.  I continue to seek out God and the spiritual perspectives of others.  So if you disagree with my thoughts or have some other ideas about this, please email me, or comment on social media.  I relish your input.

Where is America’s Joseph?
The Party of "Lower Taxes" Raised Taxes in Tennessee
Racial Strife: Finding the Antidote to the Enemy Within