Drowning in Fear? How to Find Peace in the Midst of an Electoral Storm 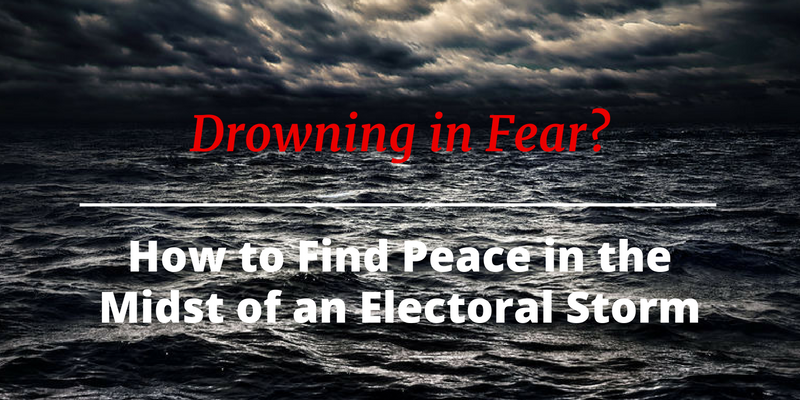 Has Campaign 2016 left you feeling like you are about to drown in a barrage of fear and moral corruption?  Have you experienced any of these emotions over the last few months?  Angst? Anger? Worry? Uncertainty? Nervousness? Fear?

As I’ve engaged in political discourse, I have seen these emotions permeating the discussions.  It’s clear that Americans are experiencing an extreme degree of angst.  The level of fear that is expressed by conservatives, republicans, independents, and democrats seems to be off the charts.

Our future appears to have been boiled down to the choice that will prevail on November 8th.  While there are monumental factors at stake that are driving the choices Americans will make at the ballot box, there have been other seminal moments for our nation.

If you think back over your life, you can no doubt identify times when your future was dire and bleak.  Similarly, while our nation’s homeland has faced a relatively tranquil and prosperous series of decades, there have been periods in our history when citizens wondered if the Republic would survive.

I’m reminded of a passage in the gospels where the disciples were fearing for their lives.  The story is found in Matthew 8 and highlights one day in the life of Jesus.  Throughout that day, Jesus healed a leper, a paralytic child, a feverish lady, cast out a demon, and healed dozens of others.  At the end of this “day in the life of Jesus” where the miraculous became almost commonplace, Jesus led his disciples into a boat to cross the Sea of Galilee.

Shortly after Jesus and the disciples embarked on the journey, a violent storm encompassed their boat.  The disciples, terrified by the tempest that surrounded them, and the waves that were crashing inside the boat, yelled out in utter hopelessness, to a sleeping Jesus.

Consider exactly what the disciples were revealing with those chilling words.  First, they had completely forgotten what they had just witnessed earlier in the day, when Jesus performed miracle after miracle, reflecting His complete dominion over the physical and spiritual.  Second, consider that this supernatural Man had led them directly into the boat.  While they were unaware of what lay ahead, Jesus fully understood what that dark night held for them.  Finally, while Jesus knew there was a storm directly in their path, He also knew that the storm was not the object of that night.  Rather, a lesson that the disciples needed to experience and learn, was precisely what Jesus had in mind.

So Jesus awoke to the disciples’ screams of fear, panic, and hopelessness.  He saw it in their eyes, heard it in their voices, and fully understood their emotions.  But, He did not immediately deliver them from their greatest fears.  Rather, as the waves were swirling around their knees, Jesus questioned:

“Why are you fearful?”

Yet they so easily forgot, just as we so often do.  But notice Jesus’ next words.

“O you of little faith.”

The disciples had within minutes lost their trust in the very Creator of the universe; the God-man who had called them to follow Him, and told them things about themselves that only God could have know; the Nazarene who they were seeing live a perfect life, who had turned water into wine, healed the sick and lame, brought words to the lips of the mute, opened the eyes of the blind and the ears of the deaf.

Yet, fear gripped the disciples and they lost their faith.  And what was drowned out that night by the storms that swirled around them was not their physical lives, but more importantly their spiritual faith.

But then, despite the fear and lack of faith by the disciples, we read these words:

“Then Jesus arose and rebuked the winds and the sea, and there was a great calm.”

If Jesus can halt physical storms can He not conquer the storms in your life, and our nation?  Of course He can.  And although there are clear biblical principles that instruct us to not simply sit back and do nothing, we also learn from Matthew 8 that what we are often lacking is faith.

And, as we learn in the book of James, faith that is revealed by our works, for we read that “faith without works is dead.”

Remember that “Jesus is the same yesterday, today and forever.”  The same Jesus that saved His disciples from drowning that stormy night, is the same One who is fully aware of the storms in your life, and our nation.  But will you and I acknowledge, trust, and follow Him, not just on November 8th, but more importantly on November 9th and forward?

In just a few days our nation will enter a new era.  It could be a very stormy and tumultuous period.  So we have two choices.  Will we turn to the ultimate answer for a stormy future and return to the only One who can guide us through these storms?  Or will we trudge on, in fear, disunity and hopelessness?

Politicians, their Parties and ideological movements are not our hope.  There is only one Hope: Jesus Christ.  Let’s turn to Him as we climb into the boat that will traverse a Clinton or Trump Presidency.  It’s going to get rough, but we know that God Himself “will never leave us nor forsake us.“

“You will keep him in perfect peace, whose mind is stayed on You, because he trusts in You.”  Isaiah 26:3

The Purpose of Liberty: Are You Fulfilling It?
The Wildly Profitable Gift Shop on the Titanic - Part 2: Our Response
Where is America’s Joseph?