Election 2016: The Most Critical one of Your Lifetime? 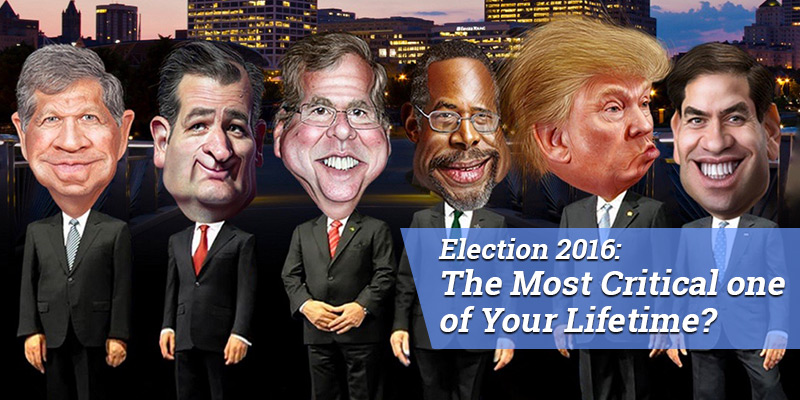 Cruz, Trump, Rubio, Carson, Bush, Kasich? What’s a conservative to do? Who is the right pick? How can one determine which politician to trust?

As I’ve thought about, studied and researched each of these candidates, I’ve certainly seen strengths and weaknesses in all of them. But at the end of the day, you and I can only pick one for our preferred nominee (assuming you’ve already ruled out the two socialists in the other party). So what is the best way to winnow out the candidates who are either not who they say they are or are ill-equipped to lead our nation back to our founding principles?

Over time, what a person does will accurately reveal who they are and what they value. As the saying goes, “you can fool some of the people some of the time, but you can’t fool all the people all the time.” So if one is willing to be objective and truly evaluate a person’s track record, one can very safely predict the future actions of that person. At the end of the day, when we are faced with difficult decisions or stressful scenarios, we will all default to the core of who we are. And so it is with all six of the remaining Republican candidates for President.

If we understand this truth and are willing to objectively apply it, we can rationally mark off those candidates whose track records will not live up to scrutiny. Of course, it will also require us to set aside our own biases, preferences and even the temptation to believe what they claim. But what do we value most, simply being told what we want to hear, or searching for truth and acting out of reason versus emotion? Consider this. When you go to a doctor, would you trust one who is charismatic, handsome, and/or winsome, but he does not tell you the truth of your illness, choosing rather tell you what you want to hear?

So as I evaluated the remaining candidates, I have done what I’m suggesting you do as well. I evaluated each of these candidates, and slowly, deliberately and comprehensively, I concluded that Senator Ted Cruz is the candidate whose track record is the most consistent and verifiable over the course of the last 30 years. While not perfect, Cruz is not simply a “campaign conservative” but rather he is the consistent conservative.

I write this article for two reasons. First, I’m seeking to provide those who are still struggling to select their candidate with some of my reasons for selecting Ted Cruz. And secondly, to encourage others who might be supporting a different candidate to at least reconsider their choice.

If there is one document that separates us from every other nation in the world, it is our Constitution. Our nation’s founding document contains not only the principles that created the most exceptional nation in world history, but it established a form of government that has enabled We the People to govern ourselves through men and women who were to remain accountable to the People. Because of the greatness of this document and the role it is meant to play in constraining the passions and mischief of men, the reverence and allegiance any politician reflects to this document should be of paramount importance to all Americans.

This perhaps is one of the greatest strengths of Ted Cruz. During his years as a teenager, Ted Cruz memorized the Constitution, and its values have guided his political views and ideologies throughout his entire adult life. His years in front of the US Supreme Court as Texas Solicitor General led to many victories for the Constitution on matters that are foremost to conservatives including the 2nd Amendment, US sovereignty, and religious liberty.

In an era when the biblical values of life and marriage have been under extreme attack, Ted Cruz has been a stalwart voice to support life and defend marriage. As the murderous policies of Planned Parenthood have been exposed, Cruz has continued to call for the defunding of this organization that profits from the taking of innocent life.

As Christians in particular come under greater attack in our nation, Ted Cruz has been a steady and consistent supporter of religious liberty. Cruz successfully defended the public display of the Ten Commandments and the words “under God” in our nation’s pledge before the SCOTUS, kept the cross standing at the Mojave Desert Veterans Memorial, defended Hobby Lobby against Obamacare’s contraception mandate, and so much more.

Senator Ted Cruz stood alone in September 2013 in his 21-hour marathon anti-Obamacare “filibuster.” While several other Senators chimed in, Cruz’ has remained the foremost voice in repealing Obamacare seeking to replace it with “common sense health care reform that makes health insurance personal and affordable and keeps the government from getting between Americans and their doctors.”

In 2013, Ted Cruz led the fight in Congress to defeat the Gang of Eight amnesty bill, which would have extended amnesty to over ten million illegals. Democrat Chuck Schumer (D) and Republican Presidential candidate Senator Marco Rubio were the key sponsors and spokesmen for the Gang of Eight bill. One of the bill’s most outspoken critics, Senator Jeff Sessions credited Cruz with the ultimate defeat of the bill saying, “I believe without the vigorous opposition from Ted Cruz, this bill very likely would have passed.” The Cruz plan to stop illegal immigration includes securing the border, restoring the rule of law, and reforming immigration to protect Americans.

The Cruz simple flat tax plan would establish one flat 10% tax rate for individuals with a postcard being used to file one’s taxes. A family of four would pay no taxes on their first $36,000 of income. Additionally, the business flat tax would abolish the corporate income tax and payroll tax, and replace them with a 16% tax. The death tax, Obamacare taxes and more would also be eliminated. The IRS as we know it would be abolished. 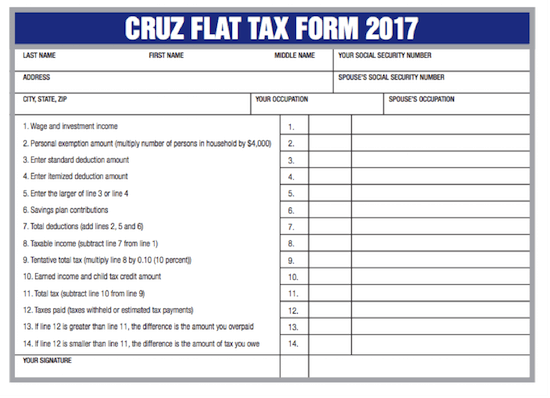 Believing that America is an exceptional and unique nation, Ted Cruz has proposed a six-point plan that would position the US as a shining beacon, to exert world leadership, rebuild our military, defeat ISIS, protect the homeland, and rip up the Iran deal. American Spectator recently stated, “Cruz presents a well-thought out, foreign and national defense policy based on the original, Reagan conservatism. One that focuses on advancing America’s security interests around the world, not on sacrificing American lives and treasure on replacing foreign dictators… birthing new democracies, or building jobs and prosperity in foreign lands.”

Justice Scalia’s death over the weekend has highlighted the strong likelihood that up to four Supreme Court Justices could be replaced by the next President. Given the razor-thin 5-4 decisions that have been rendered on issues as foundational to our nation as religious liberty, abortion, 2nd Amendment and more, the judicial philosophy of the next President’s is critical. Ted Cruz has praised Scalia for his efforts in “returning the focus to the original meaning of the text (of the Constitution) after decades of judicial activism.”

Stand Against the Washington Establishment

Ted Cruz, while only one of 100 Senators, has consistently stood firm for the values he campaigned on, and this has frequently exposed the political schemes and corruption by congressional leaders in both parties. While the Washington establishment has rejected Cruz for his principled stands, this firmness of conviction will bode him well were he to lead from the Oval Office in 2017 as he continues to stand with the People vs. the Establishment. His Five for Freedom plan would eliminate the IRS, and the Departments of Education, Energy, Commerce, and Housing and Urban Development.

Too many politicians speak of faith, but their walk and particularly their policies are at odds with the faith they claim. Ted Cruz not only professes a personal relationship with Jesus Christ, but his walk aligns with one who is truly a Christ follower. The policies he pursues are ones that both affirm the values of our Constitution while respecting the values of his faith. Hundreds of faith leaders have examined Cruz and have endorsed him for President.  At the same time, though Cruz has been quick to acknowledge he is not running as “Pastor in Chief.”

In closing, America is at a seminal moment. We are at a crossroads. The choice we make in 2016 will determine whether we will travel to a point of no return, leaving forever the Judeo/Christian principles of our founders. Will we embrace a candidate who quickens our base emotions or uses eloquent phrases, or will we examine the candidates’ track records to validate whether their talk matches their walk? We may not have another chance. This could be our last opportunity to restore the Constitution, the rule of law, and to call on God’s mercy and grace as we seek to restore our Constitution and the Creator to the rightful place in our nation. I pray you will join me in prayerfully supporting Ted Cruz for President.

If You Reject Hillary & Trump Here are Some Options
Life, Fortune & Honor: Is Your Vote Enough?
The Drought Offers Common Ground: #PrayForRain