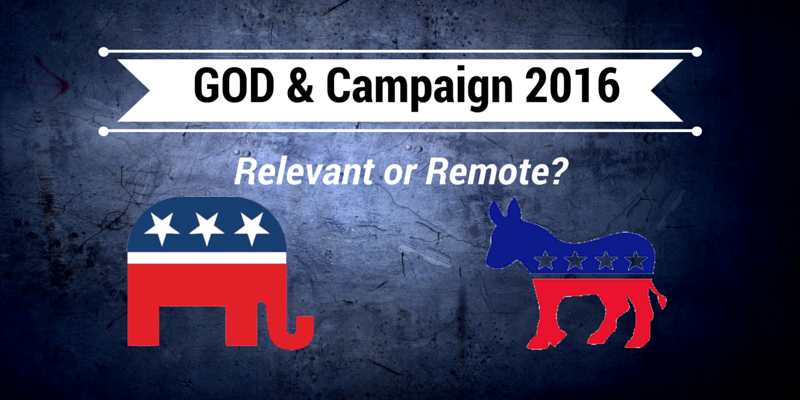 Since my teenage years, I can recall a dozen Presidential elections, beginning with the Nixon, McGovern campaign in 1972. Even though many of my early years were spent growing up in Spain, my interest in US politics was high, stemming from my father’s close following of political issues.  But as I think back over all the Presidential cycles since 1972, I can think of no election that has been more interesting and contentious than Campaign 2016.

I suppose the soil was fertile for a candidate to surface and to take on powerful and corrupt men and women in Washington, particularly when those leaders have grown completely deaf to the will of the people.  So when Donald Trump and Bernie Sanders appeared, many voters were eager to embrace the populist themes of these two men.  It’s ironic though that in the case of Trump, his policies and solutions are either vague or non-existent.  And in the case of Sanders, his approaches are the antithesis of the values that enabled our nation to become the greatest economic force ever known to man.  (As a side note, I believe Ted is the one candidate who has been taking on the corruption in DC for some time now and the growing support for his campaign is validating his consistent anti-establishment and conservative record.)

But my comments here are not so much about individual politicians and their policies, their track record or who can restore our nation to greatness.  Rather, I have given much thought to whether God is relevant in this election cycle.  Or perhaps the question we should ask is, given that God created the entire universe and all that is within it, does He even concern Himself with something as “trivial” as US Presidential politics every four years?

To answer this question, we must go beyond our mere opinions, and we should go to God Himself, and study His character.  I have long contended that we understand a person through their track record.  Likewise, we can surely arrive at valid conclusions about God by testing His track record.  It’s worth noting that God Himself said that He is the same “yesterday, today and forever” so His behavior, actions and statements throughout the millennia can still be relied upon today.

In our very first account of God, we find Him in Genesis to be engaged and interested in His masterpiece, from the details of creation, to His interaction with Adam and Eve, and the choices our original forefathers made.  God offered the first couple unimaginable blessings for their good choices but unthinkable repercussions for bad ones.  Sadly, as we have seen in the thousands of years since their cursed choice, man consistently leans in the direction of harmful and destructive choices.  As a side note, I suppose if we are honest with ourselves, we too often see this same behavior in our own personal lives.

Fast forward to the book of Judges in the Old Testament and we see the nation of Israel, willfully choosing to unmoor itself from its founding principles.  Those principles, established by God, were ones which promised unlimited blessings. But the citizens of Israel rejected those principles, preferring to do “what was right in their own eyes” and they suffered the dire consequences of their disastrous choices.  And in Judges 2, we see this hopeless statement for the citizens of Israel: “Every time Israel went out to battle, the Lord fought against them, causing them to be defeated.”

Later in the same book of Judges, we read the story of Samson, someone who, while still in his mother’s womb, was predicted to be the rescuer of Israel.  As Samson became a man we see God was regularly engaged in his life, providing Samson with unimaginable success and victories.  But we read toward the latter part of Samson’s life, these ominous words about this giant of a man: “…he didn’t realize the Lord had left him.”

It’s a sad day when a man no longer knows that God has left his side.  Perhaps as sad is the day when a nation no longer realizes it has left God’s side.

If we had the time, we could cite hundreds of examples in God’s revelation to man, where God is not only concerned about mankind, but He is intimately engaged in our lives.  But while God is interested in the individual, He is also engaged and actively involved in who our leaders and rulers are.  In Daniel 2:21 we read these words, “He (God) controls the course of world events; He removes kings and sets up other kings. He gives wisdom to the wise and knowledge to the scholars.”

Yes, God is engaged in who leads a nation, and thus, He is relevant in Campaign 2016.

Consider this real life scenario that all of us have likely experienced in some fashion.  We have all worked for a company, or perhaps some reading this have even owned a business. There is likely no one more interested in the direction of a business than the owner of that business.  The owner may employ managers to assist him in overseeing his enterprise, and even allow them certain latitude with their decisions.  But at end of the day the owner reserves the right to step in at anytime and overrule their decisions.  And if his managers’ decisions are contrary to his mission, the owner can choose to discipline them accordingly.  Now in this example we are referring to a fallible man as the owner, who, while he may have good intentions, he is nonetheless imperfect.  But in the case of God, as the “owner” of this universe, His intentions are good and perfect and He desires only the best for those who call Him “Lord.”

I have travelled a fair amount around the world and in some instances have been to far removed locations, including hours by dirt road into the remote mountains of South America.  In these isolated areas there are natives who may not actually know of the word “gravity.”  Regardless though, the lives of those natives, just like ours, are completely dominated and impacted by gravity.  We may not regularly think of this force, but you and I must respect this law of nature.  So if we willfully walk off a multistory building, we will quickly reap the consequences of such a foolish choice.

Gravity exists and is supremely relevant, whether we acknowledge it or not.

Likewise, I believe God is not only engaged but as relevant as He has ever been, whether Americans chose to acknowledge His supremacy or not.

I suppose the question we must all answer, though, at this critical juncture in our nation’s history is, what role do we play in God’s “business?”  During this election cycle, will we seek to honor God and His principles?  Or will we, like Israel, experience a scenario where God is actually opposing us, or like Samson, has God left our side?

As we consider the decisions ahead of us in 2016, and which leaders we will choose to embrace, will we honor God and His values by embracing men who, while imperfect, also chose to honor God?  Or will we simply select a candidate who inflames our base emotions but ultimately rejects the principles upon which our nation was founded, ones which sought to honor our Creator?  Time will validate which choice we make and whether God is fighting for us or against us… and whether God is no longer on our side.

As Trumpism Replaces Conservatism: Is the Party Over?
Conservatism: Defined by Action not Word
The Party of "Lower Taxes" Raised Taxes in Tennessee