How the GOP’s Compromise led to Donald Trump 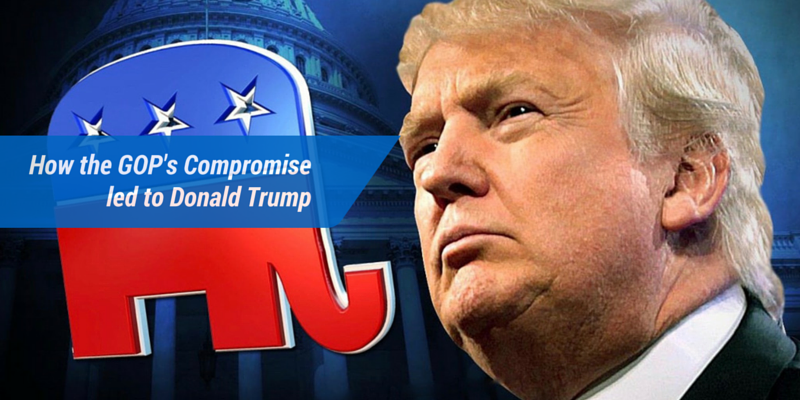 Compromise, when resorted to in the wrong scenarios, can have disastrous consequences.

Perhaps the only thing worse than being sincerely wrong is being willing to compromise the truth by diluting it with a lie.

The art of compromise is one that is an integral part of business, politics, relationships and more.  It is typically employed when two parties hold opposing views and are at an impasse.  And if compromise does not sacrifice truth or principle, then it can be a worthwhile strategy to advance one’s goals.

But when compromise involves abandoning one’s principles and truth, then it will certainly lead to failure and ultimate loss.

The GOP’s history of diluting and compromising its core principles over the last several decades has led directly to the rise of Donald Trump.  As a result, Republicans are now being represented and led by a man who:

The Republican Platform over the years, including in 2012, has been a manuscript that promoted not only our nation’s founding principles but it affirmed the values that have been synonymous with conservatives.  But it’s one thing to enumerate a set of principles via a manuscript and yet another to put those principles into action.  Sadly we have witnessed too many Republican leaders willingly compromise our founding principles, to the detriment of the party and the nation.

There are times when a person’s commitment to truth or principle requires personal sacrifice.  In some instances that sacrifice may even cost great loss.  We can look to our history to see great examples of men and women who were willing to sacrifice fame and fortune rather than compromise.  One of Tennessee’s great heroes, Davy Crockett, is one such example.  Despite facing certain death, Crockett came to the aide of his newly adopted Texas brothers at the Alamo and lost his life doing so.  But in that final act, Davy epitomized the spirit he had chosen to live by: “Be always sure you’re right. Then go ahead!“

President John F. Kennedy famously once said, “Sometimes party loyalty asks too much.”  When such loyalty demands the compromise of truth and principle, that loyalty must not only be abandoned, but it must be exposed for the failure it most certainly will cause.

“Always vote for principle, though you may vote alone, and you may cherish the sweetest reflection that your vote is never lost.” John Adams, founding father.