Heads You Live, Tails You Die? Lessons from Indy 500 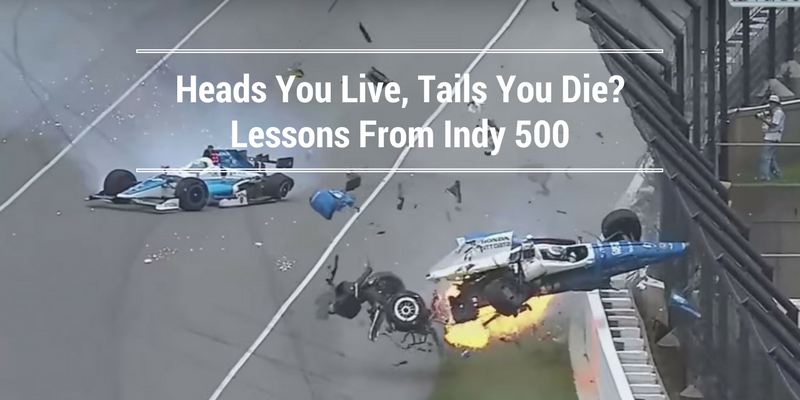 The Indy 500. Daytona 500. Monaco Grand Prix. 24 Hours of Le Mans. These are just a view of the world’s iconic motorsport races.

Strap yourself into a car with the engine revving, tires screeching, and the speedometer in the three digit zone, and there’s no such thing as a GOOD crash.  The fact is, if you’re inside the race car, any crash is a bad crash.  (I know, I’ve been in a couple of my own three digit racing crashes which you can view here and here.)  But sit back in your favorite La-Z-Boy recliner, or better yet, at the Indy 500 between Turns 1 and 2, as I was this week, at the 101st running of “The Greatest Spectacle in Racing” and a crash is an added “bonus” to the fans.

Sitting in the stands on Sunday at the Indy 500, I could not have anticipated viewing one of the most jaw-dropping crashes I’ve ever witnessed.  It was lap 53 of 200 laps.  The race had been perfect so far.  There had been no yellow, or caution flags.  The drivers were at their best.  The cars were nearly a blur as they flew around the track, 40 seconds per lap, at an average speed of 220 miles per hour.  My favorite driver in the race, Fernando Alonso from Spain, a two time world champion in Formula 1, but a rookie to the Indy 500, had worked himself into the lead.

A pack of cars came down the front stretch and slowed just slightly as they maneuvered through turn 1.  As I sat there, the “bonus” happened, directly in front of me. Jay Howard lost control and hit the outside wall.  As he slid back across the track, Scott Dixon, the pole winner, had no place to go and rammed into the back of Jay’s car.  The thud we heard was unmistakable, and we watched in disbelief as the next several seconds unfolded. Immediately Dixon’s car was catapulted high into the air and the four time IndyCar champion was simply along for the ride. His years of experience and success provided no advantage.

As Scott’s car careened through the air, his life literally hung in the balance. How would his car land as he flipped towards the wall and catch fence?  Would he survive such a horrific crash?  Could he, like many of his fellow racers in the past, skirt death? 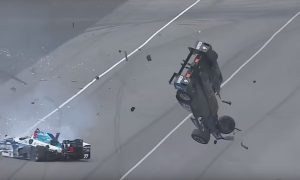 As the crash video reveals, Dixon’s aerial flight came to an abrupt and violent impact with the inside wall on the right side of his car.  The impact caused massive damage with the #9 car disintegrating into a thousands pieces.  As the car continued to twist and turn, it flipped upside down and then back over, sliding to a stop with only one of the four wheels left intact, and half the car missing.  Miraculously, Scott climbed out of the car, unhurt and waving to the crowd.

What if Dixon’s car had rotated just a quarter turn more and instead of landing on its side, it had landed driver first, into the wall?  I shudder to think what the outcome would have been.  But it’s not too far fetched to consider.  The fact is, something very similar happened six years earlier at another IndyCar race in Las Vegas when a massive crash launched former champion and Indy 500 race winner, Dan Wheldon, into the air.  As I watched the race live, the driver would suffer blunt force trauma to his head.  And Wheldon, whose career would likely have seen many more wins and successes, breathed his last that day, at age 33.  He left behind a beautiful wife and two young boys.

Following the race at Indy last Sunday, the thought occurred to me just how fragile life is. One driver dies. The other lives. Some might suggest luck plays a part in the outcome, as if it’s merely a flip of a coin to determine whether it’s heads you live, or tails you die.

But ultimately no amount of skill, preparation, goodwill or luck will prevent our taking our final breath.  Rather, death is something that will come to us all, sooner or later, as the Bible affirms:

“Each person is destined to die once and after that comes judgment.”

Death. It’s a sobering thought that most of us avoid and refuse to consider.  Yet it will happen to all of us, without a doubt.

So, the real question is how will we live our lives until the figurative coin lands on tails?  But even more importantly, will we be prepared for that moment when the inevitable occurs? For as we just read, we will all be judged, not only for how we have lived our lives, but more importantly in whom and what we trusted for our eternal future.

I don’t know what your personal standing is with God but here’s is the truth of God’s Word – the Bible.  In Romans 3:23 we are told “All have sinned and come short of the glory of God.”  In other words we have all fallen short of God’s standard of perfection.  Because of this fact, we learn in Romans 6:23 that “the wages of sin is death but the gift of God is eternal life in Christ Jesus our Lord.”  God is clear that without His Son we can expect death eternally.

The eternal life offered by God is as a result of His Son’s death and resurrection as we see in Romans 5:8: “But God demonstrates His own love toward us, in that while we were still sinners, Christ died for us.”  Finally, while God did this for us, we must accept His gift of salvation.  Romans 10:9 tells us “that if you confess with your mouth the Lord Jesus, and believe in your heart that God has raised Him from the dead, you will be saved.”  This is the road to true peace and freedom… and assurance of your eternal future, once that final moment comes for you and me.

If you want to pursue this matter further, here is a relevant website that deals further with life, death, and eternity:  http://www.areyouagoodperson.org/  Or send me an email and let’s grab coffee and talk.

Whether you are a motorsports fan or not, we all share the common need to prepare for what lies ahead.  I hope and pray you have done so, or if not, you will do so today.