I’m Mad As Hell so I’m voting for… 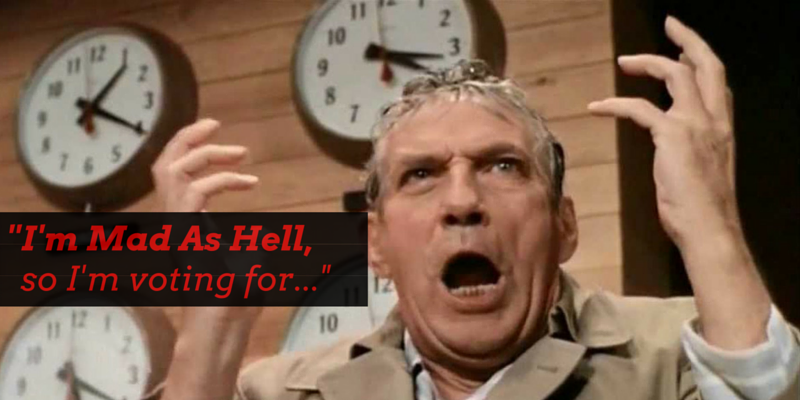 In 1976 the film Network featured a scene in which a fictional TV anchor, in response to the overall decline in America due to inflation, unemployment, crime and a recession, encouraged his viewers to stand up, go to their windows, stick their heads out and yell, “I’m mad as hell and I’m not going to take it anymore!”  While the movie was a fictional story, the plot highlighted the mood of a large number of Americans at the time.  The relevant scene can be viewed here in case you’ve never seen it. (warning: some strong language)

Similar to the movie Network, if there’s one word that describes many voters 30 years later, it is anger.  From the outset of this latest Presidential cycle, we’ve seen poll after poll affirm that voters are absolutely disgusted with politicians in Washington, and the sentiment isn’t limited to one party.

On the Democratic side, we have seen Senator Bernie Sanders, a self-described socialist, garner 41% of the vote to date, as democrat voters dismiss the heir apparent, Hillary Clinton.  Meanwhile, on the Republican side we’ve witnessed voters reject candidates who have any ties to the elite establishment, opting to support Donald Trump or Ted Cruz.  In fact, these two candidates have garnered two thirds of the votes cast to date in Republican primaries and caucuses.

It’s understandable that voters have grown angry and frustrated with politicians, particularly on the Republican side.  When candidates at all levels campaign on principles that support limited government, promote fiscal responsibility, and champion life and family, voters expect them to govern according to those values, which are affirmed in the Republican platform.  Yet, it has become the norm for politicians, once elected, to quickly turn their backs on their campaign promises. Shamefully, these men and women chose the party elite, special interests and big business over the will of the voters who elected them.

While anger is an understandable reaction to these self-serving men and women, is anger in and of itself a reliable response to such betrayal by politicians?  Should we trust anger to guide us in our selection of the individual who would lead our nation, and even the free world, in some of the most crucial matters of our time?

There is a proverb that states, “A quick tempered man acts foolishly” and another warns, “Fools give full vent to their rage, but the wise bring calm in the end.”  No doubt anger is a natural response when those who should be accountable to us show us such little respect while they trample our Constitution and seek their own self-interest.  But it’s one thing to get angry and quite another thing to respond in anger.

Responding in anger leads to many unintended consequences, and as the verses above indicate, it places us in the company of fools, or at least leads to foolish behavior.  Throwing a hammer after accidentally hitting your thumb might be a natural response, but it will likely damage a nearby wall.  Likewise, choosing a presidential candidate who claims he’ll build a wall, just because we’re angry, without scrutinizing the substance of that candidate, borders on the same foolish behavior.  Worse though, the repercussions of such an uninformed decision could prove catastrophic for our nation.

There are a host of decisions of much lesser consequence that we spend hours and even days, at times, deliberating over.  When I recently purchased a television, I spent time on the internet researching which brand and features were the best and then made two trips to Best Buy before selecting the TV.  And you no doubt have done the same when you purchased your last car, home or perhaps even a toaster.  Yet it’s amazing, if not sad, that many in this election cycle are simply selecting a candidate that pushes all the right buttons and says all the right things, because they’re “mad as hell and not going to take it anymore.”

The challenge for all of us who are angry over what is taking place in Washington is to use our logic rather than anger to make choices.  Logic can guide while anger seeks to mislead.  Reason will prevail while rage simply destroys.  But will Americans discipline themselves to resist their inner urge to simply “burn it down and start over” as the mantra of some is these days?  Will anger reign or reason prevail?  The answer to this question may determine what kind of nation we have a year or two from now.

An Aborted Life: The Thoughts & Dreams of Baby Annie
A Vote for Trump is a Vote for Hillary — Why I will never vote for Donald
The Silent Cry