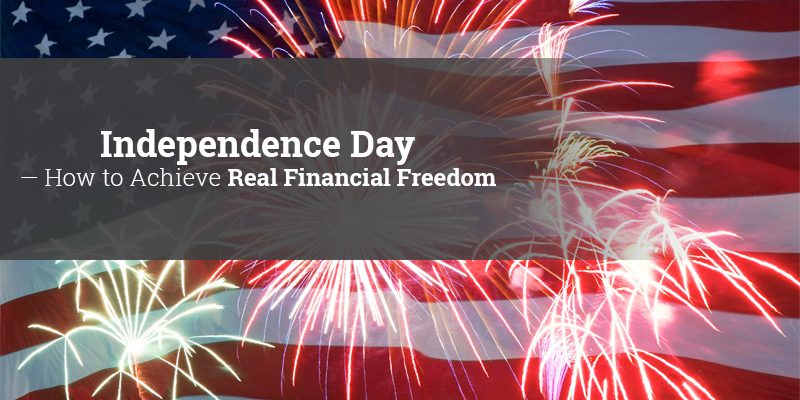 We all recognize that July 4th is the day our nation celebrates its independence. As we think back to that first independence day in 1776, those patriots who placed it all on the line did so because they sought to be free from the bondage under which they found themselves.

We can quickly skim the Declaration of Independence to remind ourselves of just what it was that those early Americans were rejecting and from what they were seeking freedom. Abuses, loss or rights, despotism, tyranny, and even death. Of course, our nation has enjoyed unparalleled freedom as a result of the willingness of those men to affirm the following words as they penned their names to that historical document: “with a firm reliance on the protection of divine Providence, we mutually pledge to each other our Lives, our Fortunes and our sacred Honor.”

Fast forward 239 years later and we find a nation that, despite all its modern day struggles, is still known as the “Land of the Free and Home of the Brave.” Yet, are you truly Free? If you sat down and honestly evaluated your daily status, your weekly routine, and your monthly actions, would the word Freedom come to mind?

In a report released earlier this year entitled “Stress in America: Paying with our Health” the American Psychological Association (APA) identified the three top sources of stress in America. They were as follows, in order of priority and the percentage of adults dealing with them:

Based on the previously referenced APA report, it’s a good bet that you may be less than satisfied with your finances and/or your work or business. If truth be known, you may in fact be restrained and hindered from celebrating July 4th, or for that matter any other day, as your own personal independence day, given the “bondage” you may be feeling. Sure, you may not be threatened with loss of life or incarceration as our revolutionary forefathers faced, but you nonetheless may be struggling with achieving the kind of financial success you’ve dreamt up. And if you’re an entrepreneur or business owner, the goals you’ve sought to achieve may have seemed to allude you for too long.

So given this reality, what’s the solution? How can one truly move from the norm in America to the exception? Is it really possible?

Of course it is. Despite the many challenges our nation is facing there are more Americans joining the millionaire ranks than ever before. In fact, in 2014 there were more than 1.2 million new millionaires to join that designation in our country.

I will be the first to acknowledge that success is not merely defined as financial wealth. But let’s also circle back to the top three areas of stress that the APA report referenced. What were they all dealing with? They were either dealing directly with finances or indirectly with the source of our finances. So, given this reality, let’s wrap up discussing your finances.

I assume that the reason you are still reading this is that you are not content with your finances, whether personal or business. Whether your income runs out before the month does or whether your business results continue to fall short of the goals you’ve set, you find yourself stressing over money. And as a result you are not free to fund many of your goals in life.

In my e-book “Five Simple Steps to Turn your Dream into Freedom” I identify what is necessary to move from the bondage you may be experiencing to the freedom you desire. If you have not read it, I’d encourage you to download it here. In it you will discover the steps you can implement to achieve the freedom that you seek. And while these steps will assist you in achieving your goals and financial freedom, they will also serve you in other areas of your life as well.

There is a Scripture verse that states, “Plans fail for lack of counsel, but with many advisers they succeed.” (Proverbs 15:22). This truth has been affirmed dozens of times for me and I realize that without trusted and knowledgeable advisors in my life, the many plans I have pursued would have failed. If you recognize this truth as well, I would be honored to assist you in discovering and engaging your unique gifts and passions so you can prosper financially, grow your influence, progress spiritually and Awake to Freedom.

Capitalism, Greed and the American Way: Are they synonymous?
The $100 Million Napkin
A Vote for Trump is a Vote for Hillary — Why I will never vote for Donald