Knowing the Facts is Easy but… 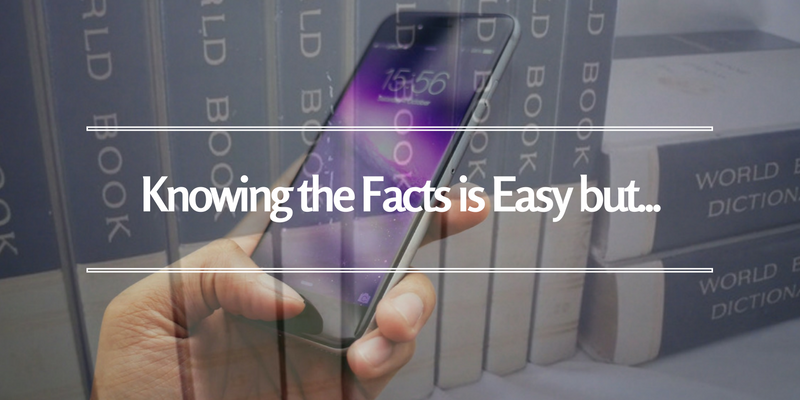 Case in point.  A couple days ago I was struggling to remember the name of the runner from Jamaica who just won gold for the third time in the Olympics in the 100 meter race.  So I picked up my phone, and asked my digital assistant: “Siri, who is the world’s fastest man?”  In just moments I had the answer along with more facts than I ever asked for:  Usain Bolt, the world’s fastest man.

Yet, with our 21st century capacity to know the facts on nearly any subject matter known to man in mere seconds, what has not changed for mankind is the ability to know how to act based on the facts.  In fact, it remains just as difficult today as it was for our ancestors thousands of years ago.

The truth is, it matters not whether we are talking about our personal life, business, political choices, moral dilemmas, or spiritual quandaries, we often know the facts of a matter, but struggle to make the right choices based on those facts.

There are times when we know the facts, but the proper response to the facts is difficult to discern.  It may be that the proper choice is not totally clear.  Or it could appear that there are pros and cons to all the various options.  So discerning which is the best option can be difficult.

This can occur when we are too close to the matter, or our experience with the facts at hand is limited.  When this happens, a second set of eyes, a new perspective, greater wisdom, or even a personal coach, can bring clarity to the matter, resulting in the proper choice coming into focus.  So we should never hesitate to bring mentors, counselors or trusted advisors into the picture, whether in our personal, business or spiritual life.

We’ve all heard the phrase, “a mind is a terrible thing to waste.”  Well, so is a conscience.  Our God-given “inner voice” can serve as a guide in leading us to the proper decision in a matter.  While this is true, at times we choose to ignore or question the voice.  We know what we ought to do, but we resist doing so.  The sad reality of this scenario though is that if we do this often enough, at some point our conscience will grow weaker and weaker, to a point that it no longer serves as a voice of discernment in our lives.  And what was designed into us as a guide can over time lose its influence, and even grow silent.

There’s a passage in Romans 7 that speaks specifically to this quandary:

We’re all familiar with the philosophy “the end justifies the means” and most would likely reject it. But the truth is that many of us will at times embrace this reasoning when it can benefit us personally.  The opening quote of this post says, “Knowing how to act based on the facts is difficult.”  If I were to re-write the quote I would revise it to say, “Knowing how to act correctly based on the facts is difficult.”

Situational ethics can frequently lead us to a justifiable option, but it may be the wrong choice.  My set of facts may reveal that I am broke and don’t know how I’m going to put gas in my tank.  While I’m in the break room at work I find a $20 bill laying on the counter.  No one is around so I justify taking the cash because no one will ever know, “finders keepers, losers weepers” or some other rationalization.  I need to put gas in my tank to get home to my family, so I’m ok with doing the wrong thing.  So that $20 is now mine.  Simple.  The end justifies the means.

We know better but we justify our decision, and thus we act based on the facts, but our action is flawed and incorrect.  James 4:17 addresses this particular dilemma quite succinctly:  “To him who knows to do good and does not do it, to him it is sin.”

At the end of the day, it’s critical to look beyond the facts and seek to respond to those facts in the correct manner.  Whether we seek out a coach or mentor, or we respond to the truth we know to do, or we resist the temptation to justify inappropriate behavior, if we want to succeed and grow in life, we must all too frequently make the tough but difficult choice.

Are there other ways you’ve found to do what is right but difficult?  If so, send me an email or post a comment below and let me know your thoughts.

The Wildly Profitable Gift Shop on the Titanic: The Dilemma
If You Reject Hillary & Trump Here are Some Options
The Impact of Broken Families on our Economy