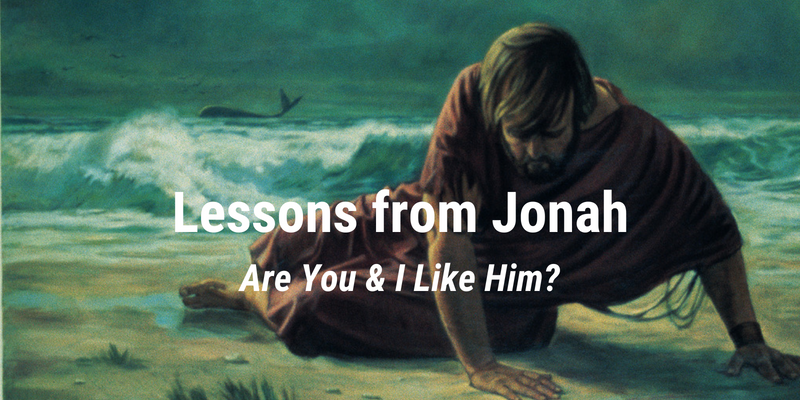 Growing up you no doubt heard the story of Jonah and the whale. You may remember it as a cute little Bible story about a man who was swallowed by a big fish and after he prayed, the whale spewed Jonah out onto dry land. But there’s a whole lot more to the story, and perhaps a critical lesson or two for you and me as well.

In the opening verses of this story, we see God directly informing Jonah of the mission He has for the prophet. However, unlike the movie Mission Impossible, there is no, “your mission, should you chose to accept it…” option. Rather, if God is your Heavenly Father, then He has placed a distinct call upon your life. No child is exempted. And while there may be some common missions that we all share, we all have a unique mission or call from God Himself.

Notice though what Jonah did when God called him:

Have you ever done what Jonah did… run from God?  We may not physically board a boat, as Jonah did. But we may have a clear understanding as to what God’s mission for us is, yet we chose to set it aside, turn the other way, and we figuratively run from the God of the universe.

Imagine trying to outrun Usain Bolt, the fastest man in the world.  Attempting such would be absurd. Now consider how foolish it is to run from the God of the universe. Infinitely more foolish.  Futile is how we might describe such an effort.

When Jonah ran, we see that God brought a hurricane-like storm into his life, to grab his attention and halt him in his journey to escape from God.

Invariably when we resist God’s mission for our life, He will bring pressure to bear on us, whether physically, financially, emotionally or spiritually, in order to get our attention and “convince” us of the priority of His call on our life.  But how do we respond when God is clearly speaking to us through the storms of life?

Jonah was an interesting fellow. As the ship he was on was being battered about by the hurricane force winds, Jonah literally fell asleep. His apathy towards God, and the others on the ship, was so great that he could care less about the impending disaster that was facing him and his shipmates.

What about you and me?  Are we so “asleep at the wheel” running from God that we no longer see the danger and threats that are posed towards us and our family, friends or even our fellow citizens?  If so, note what happened next to Jonah.

When Jonah’s shipmates were hopeless and feeling their lives were all but lost, they screamed out to Jonah, waking him and begging him to pray for them. They sensed calamity was near and they turned to the God who they themselves had yet to meet.

There was a moment in our nation when this happened from coast to coast. It was the first few days after 9/11/01. Hundreds of millions of Americans sought for some sense in the midst of our national storm. They could not make sense of the tragedy and they sought out a sleeping church, begging for hope, prayer and understanding. But it did not last long. And sadly, I believe we as believers dropped the ball, going back to sleep as quickly as we were jolted awake. We missed our call, corporately and individually.

When Jonah realized he was the reason the lives of his fellow travelers were threatened, he pleaded with them to simply throw him overboard. Jonah realized that unless he repented of his disobedience, not only would he die, but the lives of many others would possibly be lost as well. So the sailors, hoping to save themselves, literally threw Jonah overboard.

And the Storm Stopped

When we’re running from God, the storms He brings into our lives are meant to redirect us to the mission He has for us. And the storms will continue until we acknowledge to ourselves and possibly even those around us, that our rebellion is the cause of the storm.  Sadly, in order for the storm to stop, oftentimes it requires the threat of our own loss of life. And the unbelievers around us are often all to willing to send us to a murky death.

As soon as Jonah hit the water, the great fish swallowed him alive. And Jonah remained there for 3 days and 3 nights.

If you were drowning in the ocean, the last thing you might expect to save you is a whale-sized fish bearing down on you. But God is mysterious. His ways, thoughts and plans are beyond ours. And so what we may see as a threat, may in fact be our savior.

When we repent of our own rebellion, at times we may need a prolonged period of reflection, to reevaluate our past, reconsider our choices, and recommit our future to the mission God has for us. Like Jonah in the fish, God may place us in an obscure and even dark place in order to gain our undivided focus.

Once Jonah was back on dry land, after his period of repentance, reflection and recommitment, his face turned toward the mission for which God had called him. The mission was a God-sized one. By himself, Jonah stood no chance in achieving what God had ordained.

Whenever you combine those two words, there is no stopping what can happen next. Nineveh, a thriving but pagan metropolis, was facing imminent judgment from God for its utter rejection of God. But when Jonah simply obeyed God and imparted His message, the king of this wicked city repented and led his entire city to do the same. And God relented from destroying thousands.

When you and I simply obey God and pursue His mission for our lives, there is no predicting the outcome. The potential exists that an entire city could be changed and saved; or a family member might be rescued from the clutches of the enemy; or some other mission. But regardless of the outcome, God will work in you and others His perfect will and plan.  Your purpose will have been fulfilled, and God will receive the glory.

So, are you Jonah?  Or have you been?  If so, when you’ve exited your dark time of repentance, reflection and recommittment in your “big fish,” turn your face towards God and never turn back. The best is ahead and the worst is behind. And God will sustain you for whatever Impossible Mission He has for you.

To Judge or Not to Judge?
Will the Trump Presidency Touch Down or Crash Land?
The Utter Selfishness of Radical Feminists