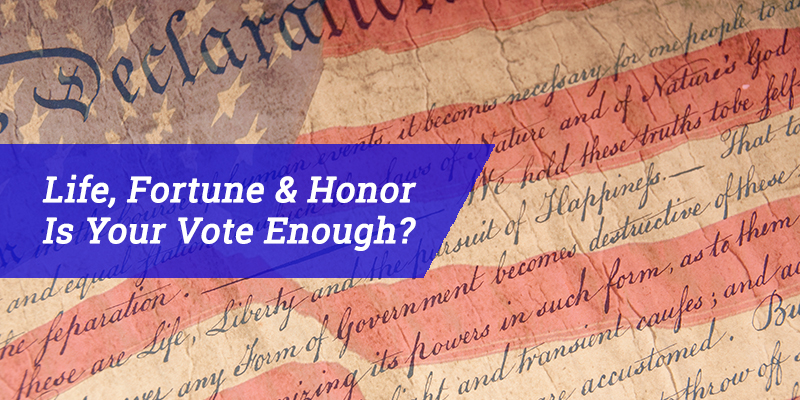 Growing up in Spain as a young child through the age of 15, I did not have the opportunity to engage directly in many of the things other American kids enjoyed. Whether it was a football game, hanging out at a burger joint, or just enjoying a pack of Juicy Fruit, my upbringing did not include any of these things. Truthfully, though, I do not feel slighted in any way given the extraordinary opportunity I had to grow up in a foreign land and experience its culture and people.

However, there is one other area in which I had no exposure to or involvement in while in Spain: the regular privilege that Americans have to engage in our republican form of government, one which allows us to freely participate in political campaigns and elections. Of course as a child and young teen, I could not vote. But had I been in the US, I no doubt would have assisted in some manner in campaigns, given my father’s interest in such.

Interestingly enough, though, while I could not be actively engaged in the process, I did follow political campaigns closely via my Dad’s US periodical subscriptions, even though I was nearly 4,000 miles away.

Once I moved back to the US as a teen and became eligible to vote, I never missed an opportunity to cast a ballot in our national elections, casting my first Presidential vote for Ronald Reagan in 1980.  However, as many other Americans, life after college quickly filled with the demands of family and business, and while I remained concerned over the direction our nation was headed, my involvement was limited to voting once every 2-4 years.  Over the next 25 years, while God certainly blessed my efforts in business and gave me a wonderful family, I look back now, and I ask myself the question:

There is no doubt that the condition of our nation, both economically and morally, directly impacts our lives, both personally and professionally.  If you own or operate a business, you know the difficulty we have as business owners finding competent, hard working employees.  This was not the case several decades ago.

As a business owner, you also know the difficulty you face as governmental demands continue to grow ever more restrictive, placing a noose around your enterprise and even your life.  The liberties our forefathers enjoyed are gradually being diminished.  But even more importantly, the values that were embodied in those same men are also under steady attack.

I think of the words at the end of our founding document, the Declaration of Independence, to which the 56 signers of the document affirmed:  “we mutually pledge to each other our lives, our fortunes, and our sacred honor.”

Consider this truth about those 56 men.  The vast majority of them were business owners.  They were not much different than many of us with many of the same demands: family, business, church, etc.  Yet, when they began to see the direction their nation was headed, did they ignore the obvious and simply bury their heads and recommit all of their energies to the demands and goals of their businesses?

Clearly they did not.  And because of their historic and unselfish decision, all of us today likely owe our very existence and certainly the many blessings we now enjoy to their commitment.  They chose the nobler, placing their own lives, fortunes and honor in the balance.

I think back to my post-college years through 2006 and I realize that while I was busy pursuing the American dream, there was an American nightmare gathering right before my very eyes.  While I could see it, I ignored it in favor of my family and business (and not always in that order), while continuing to do my “civic duty” by showing up at the polls and casting my singular vote.

But looking back now, if I’m honest with myself, my focus was distorted or at the minimum incomplete.  That is not to say that my duties as a father, husband and business owner should have been shunned.  But it’s clear that our culture and nation were and are under attack, and I did little to counter that attack.

I was like the employee on the Titanic, who committed himself to the task of making sure the decks were clean and the chairs were aligned, even though the ship barreled towards its certain demise.

As business owners, I realize we must be accountable to our staff, our stockholders, our lenders and even to our government.  But I would ask the question:  Are we capable of addressing the clear and unambiguous attack on the values that we hold so dear?  Is this not our solemn duty?

It’s unlikely that your values and mine mirror each other completely.  But I would guess that many of our values are similar whether they relate to Free enterprise, Taxation, Life, Liberty, National Security, Immigration, Marriage, Education, Fiscal policy and so many more.  Here’s where the rubber meets the road, though.  Many business owners and other leaders are often hesitant to express their thoughts on issues that could be divisive, fearing potential repercussions from standing firm on their core values.  Yet, that is precisely what has contributed to the crumbling of our nation’s foundation.  Because this is one truth we all can take to the bank.

While good may slumber, evil never does.

If you are unsure about this truth, see if you can find a day or a week that passes when there aren’t ample examples of evil in your city or our nation.  And if you shudder perhaps at the use of the term “evil” then use another.  But the truth is that the values that led to the founding of our nation were good.  And so if those values were good, then it stands to reason that those who attack those values today are promoting something less than good, or even evil.

Here’s another truth we can all see playing out everyday.  Those who oppose the values you hold dear are seldom silent or idle in the affirmation of their competing values and beliefs.  In fact, the sad fact is that those opposing your values are often the most outspoken and active individuals in advancing their values.  And if we’re honest, many of those beliefs are contrary to those upon which our nation was founded, and have directly contributed to the erosion of our culture and the strength of our nation.

I have been heavily impacted by the verse that says, “To whom much is given, much is required.”  You and I have been given much.  Not only are we citizens of the greatest nation that ever graced this planet, but we’ve been abundantly blessed in so many other ways, including that business you might own.  But with these great blessings come great responsibility to defend and promote the contributors to those blessings.

So, as I wrap this up, I have learned the hard way that voting in our great nation is not enough.  Our founders knew this and willingly risked it all.  Will we do less or will you and I “mutually pledge to each other our lives, our fortunes, and our sacred honor?”