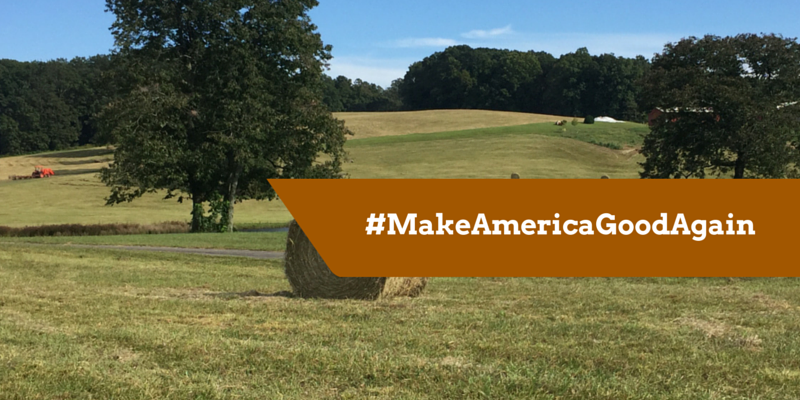 This week I am witnessing first hand the 2016 Republican National Convention in Cleveland, Ohio. As I’ve been observing the happenings within the Quicken Arena, the one theme that continues to pop up again and again, is Make America Great Again.  Of course, that being the Trump campaign motto, it should come as no surprise.  From t-shirts to ball caps, street vendors to banners, the motto is everywhere I look, here in Cleveland.

The brilliantly conceived message is one that plays well with disillusioned and disgusted voters, who have experienced the last seven years of an Obama Presidency and grown increasingly skeptical and angry with Washington DC.  But to add to that anger, Republican voters have had to endure a party establishment who cares more about power and reelections than they do about upholding the Constitution, and fighting back against Obama’s all out assault on our freedoms, national security and economic revitalization.  So Trump stepped into a perfect storm and has been a master at tapping into the base emotions of voters, with a message that sells to the disgruntled masses.

While the overriding theme of the Convention this week is Make America Great Again, the Trump campaign has played brilliantly off that theme to devise a relevant emphasis each day as follows:

I wouldn’t deny that these are all worthy topics and aspirations, but as I’ve considered Trump’s Make America Great Again theme, I believe the New York billionaire is attempting to place the cart before the horse. It’s as if Trump’s seeking to build one of his skyscrapers before digging the foundation.  Sadly, many of the American people have eagerly embraced Donald’s message, believing they can simply don a baseball cap, elect a businessman, and the nation’s course will be reversed, with Great days ahead, absent any personal sacrifice or change.

In order for a business to achieve greatness, it requires a superior product or service, with a comprehensive approach and attention to the way it treats its employees, suppliers, investors and even its community.  Similarly, a person will only be truly great, if that person possesses the inner qualities that lead to greatness: humility, service, wisdom, courage, forgiveness, trustworthiness, and more.  In years gone by, the word that was often used to describe these qualities was virtue:  “behavior showing high moral standards.”

So can a nation be Great, as in “superior in character or quality” without being Good or virtuous?  Clearly Trump’s message suggests, by the use of the word “Again,” that America is no longer Great.  And if that is accurate, which I believe it is, then what was it that led to America’s greatness in the past?  Was it merely the desire or goal of being great, by those before us, that led to America becoming great?  Or was it based on some other qualities our forefathers and grandfathers possessed, that led to our nation becoming the greatest nation this world has ever known?

I would suggest that to be great, America cannot simply seek to be great, anymore than wishing to be a great company can cause a business to excel.  Greatness results from small, daily routines when others are not watching that flow from conscious decisions that ultimately develop into one’s character.  Greatness is not the end goal but rather it is a by-product of other disciplines.

If America is to become great again, it will not be as a result of a mere focus on greatness but it will rather flow from a commitment to the individual attributes that lead to greatness.  Those attributes must be developed in our lives, and consciously taught and passed on to the lives of our children.  There is a famous quote that we have all heard before: “Sow a thought, reap an action; sow an action, reap a habit; sow a habit, reap a character; sow a character, reap a destiny.”

Sadly, the current destiny of our nation has resulted from the thoughts, actions, habits and character that we have developed individually and collectively as a people.  Our fall from greatness will not be restored with mere political victories and cheap cliches that induce warm and fuzzy emotions.  Rather, it will require each of us to take serious inventory of our own character to determine how and where we have contributed to the current course of our nation.  And as we identify our own flaws and weaknesses, we must then be willing to make the hard changes in our own lives and thus begin the more difficult but absolutely crucial changes to right the course of our nation.  Only when we do so can we #MakeAmericaGoodAgain.

“Bad men cannot make good citizens. It is when a people forget God that tyrants forge their chains. A vitiated state of morals, a corrupted public conscience, is incompatible with freedom. No free government, or the blessings of liberty, can be preserved to any people but by a firm adherence to justice, moderation, temperance, frugality, and virtue; and by a frequent recurrence to fundamental principles.”   Patrick Henry

America: The Point of No Return?
Too Many Citizens, Too Few Soldiers
Outward Success versus Inner Character