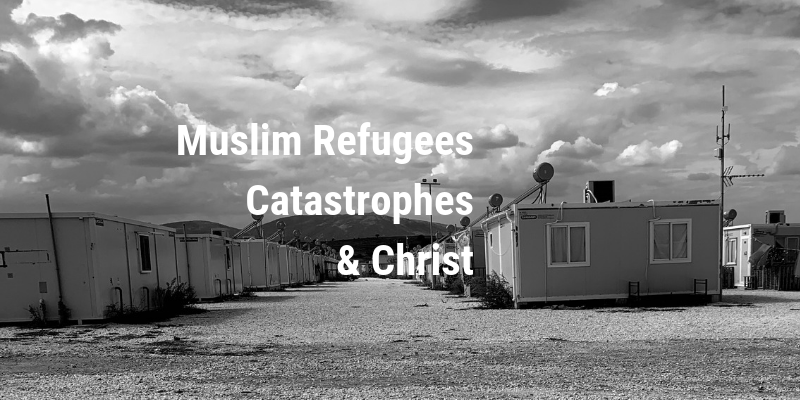 Rasha was beyond excited as she skipped out of her house. She’d been dating Nazir for several months now and the more she was away from him, the more she longed to be with him.

She accelerated her pace as she saw the bus approaching the corner. From there it was just a short 15 minute ride to the shop where her beloved Nazir worked.

Ever since she and Nazir had met she had been praying for him. As a former Muslim who had found Jesus to be “the way, the truth and the life,” Rasha believed that Jesus would reveal Himself to Nazir just as He had to her. She thought back to how much her life had changed since accepting Jesus as the Son of God, who forgave her of her sins. Things were not easy, with her family shunning her and threatening to disown her now that she was a Christian.  But she had a peace that she could not explain.

The bus came to an abrupt and startling stop, jolting Rasha from her thoughts. Sirens were going off again, signaling the potential of falling bombs or mortars. She had grown accustomed to the sirens, but she knew there was always a real threat. The bus remained stopped for another several minutes before they began moving again.

As they rounded the corner, Rasha could see Nazir’s little shop. She jumped off the bus and jogged towards the spot where she would see the love of her life. She hoped she could talk again with him about Jesus.

As Rasha approached the large glass picture window at the front of the shop, she could see Nazir inside. Her pulse quickened. Their eyes met. Smiles spread across their faces. And…

The concussion from the bombs threw Nazir across the room as the glass from the front window exploded into the shop. Rasha was gone. Those dark beautiful eyes that had always penetrated his soul were there just a moment before. But now a huge fireball marked the spot where she had stood.

Nazir screamed. Tears poured down his cheeks as he yelled Rasha’s name over and over. Shuffling through the shards of glass and debris that now littered his shop, he crawled out through the gaping hole that was just moments earlier a window, through which he and Rasha had smiled.

Rasha was nowhere to be seen. It was as if she had vanished into thin air. But then he noticed a strange smell. A burning smell. One that brought a sickening feeling to his stomach. And then he saw them. Black charred bodies that had been burned beyond recognition.  He collapsed. The sense of loss was too great to bear. How could someone he loved so much be gone forever?

How could humans hate humans this much?

How could Muslims kill Muslims?

The above story is based on a real incident which happened to Nazir (name changed to protect his identity) in Damascus, Syria. The name “Rasha” and the moments leading up to her death are my imagination, but the explosion, her relationship with Nazir, his love for her, and the remaining facts are as reported to us by Nazir.

Earlier this month I had the opportunity to travel to Greece by way of Albania. I was joined there with several other men who live in that part of the world, and we were engaged in what was to become a series of life altering meetings.

We had the opportunity and privilege to interview a number of refugees, including Nazir, who had fled from cities in Syria, Iran and Iraq, mostly because of the wars and conflicts there. Many of these former Muslims are now living in crowded refugee camps throughout Greece.

In addition to Nazir’s story above, below is a sampling of some of the comments of these refugees that will give you just a small glimpse into the catastrophes they fled that led to their new life in Christ:

The Bible is full of stories of our miracle working God, many as dramatic as the ones above.  Of course, in America, we see evidence of His miraculous work every time we look in the mirror, look out our window, look into the sky or see a new baby.  But how often do we see God working in ways like those experienced by these Muslim refugees? In my case, never. But that does not mean that God is silent.  To the contrary.

God promises to be found to those who earnestly seek Him.  The more than half-dozen individuals that we interviewed are all powerful testimonies of individuals who were calling out to God in their time of dire distress. They were diligently seeking God.  And God in miraculous ways showed Himself through Jesus. Their lives have been transformed for eternity. And these new believers are now reproducing themselves in the lives of dozens of other refugees within the camps scattered around Greece and beyond.

As I was reading through Scripture this week, I came across this verse:

“He showed you these things so you would know that the Lord is God and there is no other. He let you hear his voice from heaven so he could instruct you. He let you see his great fire here on earth so he could speak to you from it.” (Deuteronomy 4:35-36)

Many of these refugees heard God’s voice in Jesus.  They witnessed “these things” in order that they would distinguish between Allah, the god of Islam, and the one true God, who not only created the universe, but also sent His Son Jesus to die for them (and you, and me).  When God showed Himself to be real to these refugees, they embraced Him completely. And every one of these refugees were promptly baptized, to present a public testimony of the fact that they left Islam and embraced Jesus, the Lamb of God who takes away the sins of the world.

My good friend Nathan has aptly described what is occurring as a result of the war-torn conflicts throughout the middle east in this manner:  “From Catastrophe to Christ.”  He is planning a book by that name, as a sequel to his more recent book, that he co-authored with Joel Richardson:  The Mystery of Catastrophe.

While wars and violence are horrendous, and any person would seek to avoid, we can clearly see God’s sovereignty at work in a mighty way through these ongoing catastrophes. And each one of these refugees is eternally grateful for the catastrophe they experienced, for without it, they would likely have never met Christ.

Hope & Change... For Millennials
Lessons From Jonah. Are You & I Like Him?
The Ugly, the Bad, and the Good... of the Coronavirus