Obamacare Repeal: Broken Promises By a President, a Party, & Its Politicians 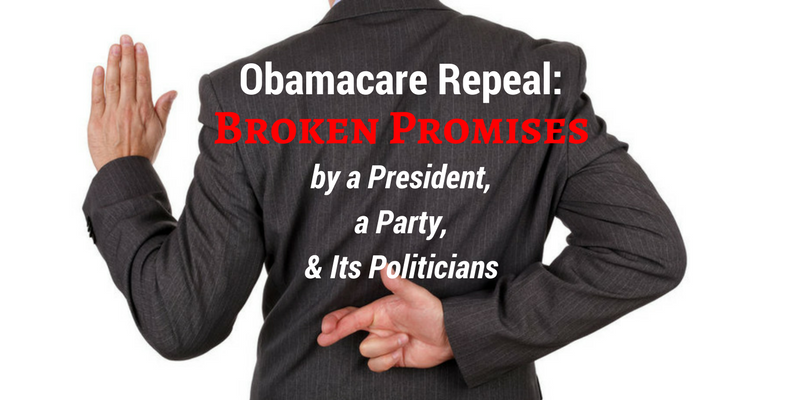 It was March 23, 2010.  One of the most contentious political battles in recent American history was over. President Obama had just signed into law his signature legislation: the Patient Protection and Affordable Care Act, aka Obamacare. House Republicans immediately introduced legislation to repeal Obamacare, and over the next six years, Republicans would introduce more than 60 different bills to repeal all or parts of Obamacare.

In 2015, the House and Senate, both under Republican control, passed HR 3762, a bill that repealed the most significant parts of Obamacare. (President Obama would veto the Repeal bill.)   It’s noteworthy to highlight that support for the 2015 Repeal of Obamacare was near unanimous by Republicans with only 7 House Republicans and 2 Senate Republicans voting Nay, or against it. (239 Republican Representatives and 52 Republican Senators voted Aye, in favor.)  As a side note, my Congressman Chuck Fleischmann and both of my Senators, Bob Corker and Lamar Alexander, all voted for the Repeal Bill.

During the three election cycles (2012, 2014, 2016) following the passage of Obamacare, Republican House and Senate candidates, challengers and incumbents alike, would nearly unanimously, and repeatedly, promise that if voters would elect, or reelect, them, they would Repeal Obamacare.  And based on those promises, Republican, moderate, conservative, tea party, and independent voters entrusted their vote to these elected officials.

Then the 2016 Presidential cycle happened.  While the Republican Primary was one of the most crowded field of candidates in memory, with each of them offering their own ideas and promises, there was one issue on which all the candidates agreed: Their unanimous commitment to the Repeal of Obamacare.

Following the Primary, and with the nomination of Donald Trump as the Republican candidate for Presidency, the GOP’s nominee promised to Repeal Obamacare.  And the 2016 GOP Platform further reiterated the Party’s commitment to a full Repeal of Obamacare.  Note this quote from the Republican Platform (page 36):

“Any honest agenda for improving healthcare must start with repeal of the dishonestly named Affordable Care Act of 2010: Obamacare. It weighs like the dead hand of the past upon American medicine. It imposed a Euro-style bureaucracy to manage its unworkable, budget-busting, conflicting provisions. It has driven up prices for all consumers. Their insurance premiums have dramatically increased while their deductibles have risen about eight times faster than wages in the last ten years… We agree with the four dissenting judges of the Supreme Court: ‘In our view, the entire Act before us is invalid in its entirety.’

“To that end, a Republican president, on the first day in office, will use legitimate waiver authority under the law to halt its advance and then, with the unanimous support of Congressional Republicans, will sign its repeal.”

Let that last sentence sink in.

Is there any question that the full Repeal of Obamacare was promised, ad infinitum, by the Party and all of its candidates?

But if there’s one thing that seems to be synonymous with politicians, it is broken promises.  There is nigh a profession that has a lower credibility rating than that of a politician.  I have met many politicians including local, state and federal ones. And one thing I’ve noticed about most of them is that they are fond to commit to the voter in order to gain their vote.  But once they are elected, there is something that flips in the politician’s mind; something that quickly turns the page on those campaign promises, as they jet off to Washington or their state capitol.  Whether it’s a character flaw in the type of individuals that are attracted to the profession of governing, or whether it’s that as they leave voters behind, they can also leave promises behind, it’s a rare instance when politicians are willing to fulfill the promises they make.

Sadly that’s what American voters once again witnessed this last week.  When the Republican health care plan known as RyanCare, TrumpCare, or the American Health Care Act, was put forward, a promise was broken.  And it wasn’t just one promise. The Repeal of Obamacare was promised by:

the Republican Party in its 2016 Platform.

And as already noted, nearly every Republican Representative and Senator voted in favor of the 2015 Repeal of Obamacare as well.

I once heard someone ask the question,

“How do you know when a politician is lying? Answer: When their lips are moving.”

Of course, this is a very cynical, over-generalization of an entire profession.  But when the overriding theme of a political party and their nearly 300 elected officials is the Repeal Obamacare, for six long years, and when they are ultimately entrusted with the power and authority to do so, what should voters conclude when such a material promise is broken?

What is also commonplace amongst politicians is to deflect blame when they’re under pressure, rather than simply owning up when they break their promise. Once again, this week we saw the blame game, from Trump to Ryan, and from House Representatives to the Republican Party. That blame was heaped on 40 or so Representatives who, unlike Ryan, Trump and an entire party, resolved to keep the promise they made.  This group, known as the Freedom Caucus, had a simple message: “Let’s keep our promise. Let’s Repeal Obamacare. Let’s simply vote as we did in 2015.”

But they became the villains. The scapegoats. And many voters are falling for Trump and the Republican Party’s blame game, forgetting that those doing the blaming are the ones breaking the promise.

The 2015 Repeal bill, supported by nearly every Republican member, was actually introduced by Freedom Caucus member Jim Jordan last month.  But Ryan and Trump and a couple hundred other elected officials, effectively affirmed Obamacare and all of its destructive regulations, by refusing to honor their promise.  Had they simply taken up the Repeal Bill that was passed by each of these Congressional members in 2015, Obamacare would be history, with a two year phase out period.  This time frame would have been ample time to pass common sense healthcare reform.

So what’s next? My guess is that politicians will be politicians, and do what they do best: Promise the world but deliver a sack of IOU’s. And their credibility will sink even lower than Trump’s favorability ratings. But my hope is that for once, these men and women will honor their promise, and just do the right thing.

Our nation’s future, and your healthcare, hang in the balance.

Racial Strife: Finding the Antidote to the Enemy Within
The Utter Selfishness of Radical Feminists
Thanksgiving in Nepal