The Party of “Lower Taxes” Raised Taxes in Tennessee 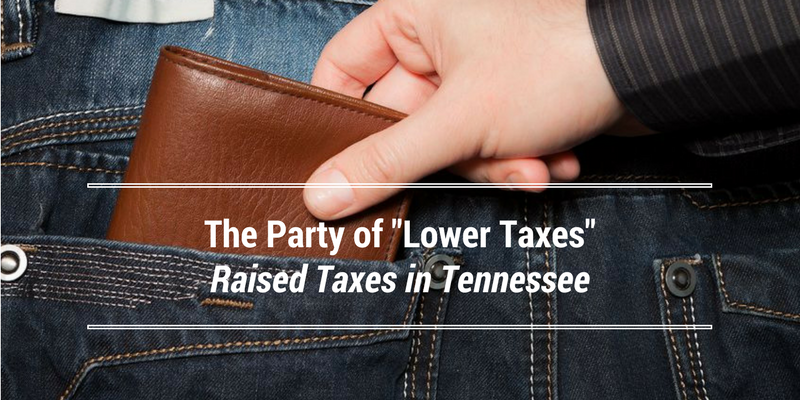 Tennessee Republicans, from the party that boasts it is for lower taxes, just raised taxes in the Volunteer state as they wound down this year’s legislative session.  The party which enjoys a dominant super majority, controlling the House, Senate and Governorship, raised the Gas Tax on every Tennessean.  Note that even if you don’t drive, the gas tax will apply to you since prices on anything delivered by trucks will most definitely increase.  And those increased transportation costs will be passed on to you, the consumer.  It’s as if legislators just pick-pocketed Tennessee taxpayers.

But here’s what’s even more astonishing about the haste by legislators to raise the gas tax.  Tennessee enjoyed a $2 Billion surplus this last budget year.  And this coming year, the state of Tennessee projects another $1 billion surplus, as well as in subsequent years.

Because a government’s primary source of receipts is through taxes and fees, a surplus suggests that citizens are being overtaxed.  But rather than reduce the state’s tax rate, Governor Haslam and dozens of other Republicans chose to keep taxes at their current levels, thus continuing the state’s surplus.  So not only were Republicans content with overtaxing Tennesseans, but they compounded the matter by increasing the Gas Tax as well.

I have held cordial and pleasant relationships with most of my local area Republican representatives.  But being friends on a political or even social level, does not mean that one should turn a blind eye, or censor one’s comments.  The fact is that when those professing to be fiscal conservatives while campaigning, violate fiscal conservatism when elected, it’s incumbent in our form of government to call these individuals to account.  The full list of legislators who voted for and against the Gas Tax is here.

Sadly, every single legislator in Hamilton & Bradley County, TN voted FOR the Gas Tax.  And out of the list below, only one is a Democrat:

I acknowledge that many of Tennessee’s roads and bridges are in need of repair.  And to be clear, those of us who opposed the gas tax are NOT against increasing the amount that our state allocates towards our road budget.  Rather, our opposition has always been that the default answer by most Republicans was to raise taxes when there are multi-billion dollar surpluses that are available to fund every penny of the Governor’s proposed road budget increase.

What is inexplicable about the whole gas tax matter though, is that every initiative that was proposed that sought to avoid tax increases in favor of using surpluses to fund road repairs was met with intense opposition by the governor and Republican legislators.  It was clear they would not take NO for an answer to their gas tax increase.  And why they were stuck on a gas tax increase is something we may never know.

During the course of the debate over the gas tax increase, many pro-tax Tennessee Republicans were quick to embrace the following  quote from Ronald Reagan:

“The person who agrees with you 80 percent of the time is a friend and an ally – not a 20 percent traitor.”

But here’s the problem with “tax & spend” legislators using this quote.  In every relationship there are negotiables and non-negotiables.  Consider the most fundamental relationship: marriage.

If a husband picks up his clothes 80% of the time, but fails to do so every so often, he is not a traitor, deserving of a firing squad.  Rather, he just needs some grace from his wife, and she will likely agree he is “a friend and an ally.”

But if that same husband is faithful to his wife 80% of the time and carouses around “just” 20% of the time, he is a 100% traitor to his wife and vows, and he shouldn’t be surprised when an attorney delivers the divorce papers.

Obviously, all matters are not equal.  So when a Republican legislator professes that he/she is a fiscal conservative, then a non-negotiable should be the matter of raising taxes when there are better alternatives.  Utilizing a multi-billion dollar surplus would seem to be a better alternative than raising taxes.

So don’t buy this distortion of Reagan’s quote.  The very legislators who rush to Reagan for cover are the same ones who are unfaithful to the values that Reagan espoused and lived, at least in the area of raising taxes in 2017 in Tennessee.

So I wonder what’s next from these legislators?  Your guess is as good as mine, but betting on the fact that they’ll stand firm against tax increases is no longer a given.