The Purpose of Liberty: Are You Fulfilling It? 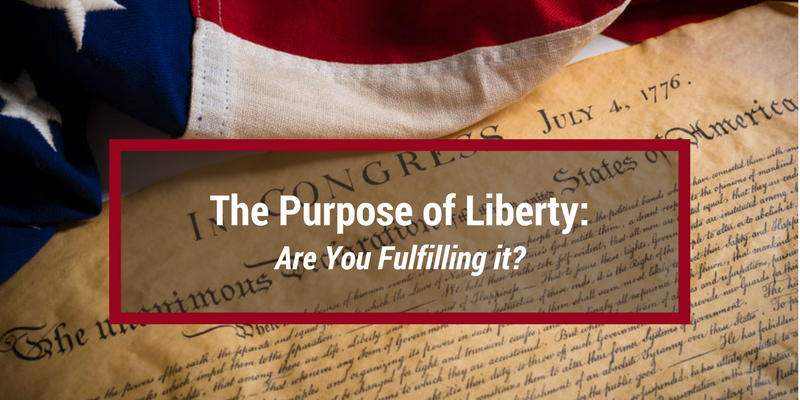 July 4th: a day that many Americans will spend with family and friends, enjoying food and fireworks.  It’s a day that we celebrate the founding of our nation, more than two centuries ago.  That day in 1776, was a day like no other for the men who penned their names to our founding document, the Declaration of Independence.  Their grievances were serious, real and legitimate.  And their public defiance of the King was a certain death warrant, leading them to mutually pledge their “lives, fortunes and sacred honor.”

Their unwavering commitment to the principle of Liberty, resulted in innumerable blessings for us today.  But have you ever considered what the purpose of Liberty really is?  Is its end simply the “pursuit of happiness?”  While this question begs a much deeper and more thorough discussion than what follows, I trust these brief thoughts will serve to challenge you and me to go deeper in meditation.  And as we do, perhaps our thoughts will call us to a higher level of accountability than what we as Americas are accustomed to acknowledging.

The First Liberty: In a Perfect World

“In the beginning God created the heavens and the earth…”  I would assert that this phrase, known to most people across the world who have been blessed with the knowledge of the Scriptures, is the greatest opening statement of any manuscript ever known to man.  In the passage following this opening truth, we find that God not only created the entire universe and all that is within it, but He also established the principles and laws that would control all things.  These laws would govern not only the physical, but also the emotional and spiritual, and even what our Founders referred to as “unalienable rights.”

So when God, on the sixth day, created man in “His own image,” He presented to that first couple a state of perfection.  In that perfect world, God offered Adam and Eve the freedom to exercise liberty, and then he defined how they would do so.  The first couple would initially exercise dominion over the world God had created — every creature, plant and the entire earth.  Secondly, Adam & Even would express their love by multiplying themselves, thus reproducing life.  And lastly, they would discharge their free will, and their understanding of liberty, by the choices they would make.

As Adam and Eve partook of liberty in those first few days of perfection, enjoying a deeply personal and intimate fellowship with God, they were free to experience all of God’s creation.  A smorgasbord of sensual pleasures surrounded them everywhere they looked.  The radiant beauty of their environment, the luscious delicacies their taste buds enjoyed, and the intellectual and emotional stimuli they were exposed to during their daily walks with God, was beyond any experience modern man can fathom.

But there was just one, ever so small, limitation that would test their understanding of liberty. The tree of the knowledge of good and evil, in the center of the Garden of Eden, was off limits.  The perfection they daily enjoyed eventually came to be overshadowed by their knowledge that there was one singular item, stored away in the middle of their “heaven on earth” of which they were to steer clear.  Their “dilemma” is akin to being given the key to Whole Foods so that anything you desired to take and eat was yours, except for one box of cookies on a counter in the middle of the bakery department.

So liberty’s purpose was clear.  And liberty’s test was even clearer.  Mankind’s destiny literally hung in the balance as Adam and Eve grappled with the concept of liberty.  Would they fulfill God’s purpose?  Would they exercise dominion over every aspect of God’s creation, including the tree in the middle of the garden?  Would they tame and control their own free will to conform to God’s singular restriction on their liberty?  Or would they chose to pursue a distorted view of liberty, one that suggested they could do anything they pleased, with no consequences?

Sadly, we know the rest of the story as Adam and Eve trampled the liberty God gave them, exercising their free will to violate the boundaries that liberty imposed.

Liberty in an Imperfect World

Since that tragic day when Adam and Eve traded true liberty for a lesser form, man has continuously sought liberty.  But not until the founding of these United States of America has there been a nation whose very DNA was infused with liberty as ours.  Many of our nation’s greatest icons carry the theme of liberty.  The Statue of Liberty.  The Liberty Bell.  The Liberty Tree.  Sons of Liberty.

So it seems only natural that Americans love liberty and seek after it.  But do we understand what liberty is, and more importantly are we fulfilling its purpose in an imperfect world?

Thinking back to the initial purposes of liberty as revealed in the opening scene of the world, we are to have dominion over all of creation.  The world is ours.  God has granted it to us but will also hold us accountable for the way in which we subdue it.  Are we acting as the stewards that God intended in every asset, gift, and relationship that God bestows upon you and me?

Secondly, are we reproducing and embracing life?  Life is under attack like never before.  The forces of evil are seeking to dismantle life, convincing us that children are a hassle, and in a million instances a year in American, not even worthy of life.  Our birthrates in America are not even sufficient to replace ourselves.  So do we truly value life?  Yet, liberty demands that we must.

Finally, liberty is a test, between good and evil.  In a sense, Adam and Eve had it much easier.  Their choices were sorted into two categories.  In the first column was the one item in their world of infinite good that they were told to reject:  the tree of the knowledge of good and evil.  In the other column was everything else!  They were presented with only one bad option and literally millions of good choices.

Not so in our lives.  The truth is that we have literally millions of options and choices available to us at any given moment, both good and bad. And because of the free will that God granted to us when he created Adam, we have the liberty to chose either, the righteous or evil.  But sadly there is a plethora of wrong choices today.  And it seems that it’s all too easy to default to bad choices, at least I know it is in my life.  But while liberty gives me that option, liberty also demands better.  Liberty instructs that we must resist that which is not good, not only for our own good, but for our family, friends and nation.  For if we learned anything from Adam and Eve, we can understand that our choices are not made in a vacuum but rather they ripple out, resulting in either a wave of good or a flood of bad.

So at the end of the day, the purpose of liberty is simple.  It is a test.  Will you and I pass the test?  Will we weigh every choice by God’s perfect standard, rejecting those that don’t measure up?  Or will we abuse liberty to do what we want, regardless of the impact on ourselves and others?

Only you can say.  But as we celebrate another July 4th, may we never again forget the purpose of liberty and with God’s help, exercise our liberty in a manner worthy of God’s blessings.

I'm Mad As Hell so I'm voting for...
The Key to Life
A Message to Our Newly (Re)Elected Officials: You Won! Now What?