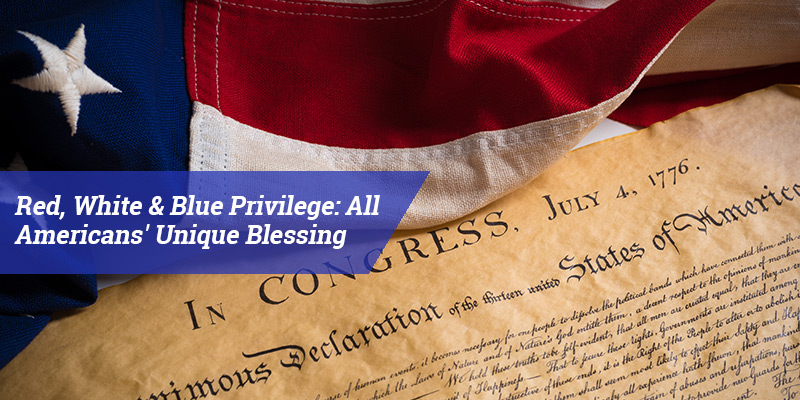 “White Privilege.” This is a phrase we’ve begun to hear frequently in our nation over recent months. Even some leading Presidential candidates are jumping in to opine about the subject. I’d like to weigh in on this divisive topic, but before I do, I need to briefly touch on my past.

Growing up in Spain for more than a decade, I can remember many instances when I had the opportunity to affirm my American citizenship. Whether I was being singled out by Spanish kids when playing with them in the street, or whether it was wearing my size 12, red, white and blue Converse high-tops, there was no mistaking which country I called home.

During those formative years in Spain, I vividly remember the admiration, awe and even envy that so many Spaniards had for the particular blessing I enjoyed, my American citizenship.

Since those years in Spain though, I have had the opportunity and privilege to travel around the world to numbers of foreign countries. Yet, each time I have returned to US soil I have found this abiding truth. I am truly blessed to call America my home.

As Americans there is one distinct privilege that you and I share and it’s not based on our skin color. Rather, I would suggest it’s our “red, white and blue” privilege. I know it is politically expedient to dissect and segregate our population into demographics along race, income, political ideologies, and other such strata. But each time we tolerate or proffer such division, we refute the exceptionalism of the American experiment.

Our nation’s founding document uniquely proclaims: “We hold these truths to be self-evident, that all men are created equal, that they are endowed by their Creator with certain unalienable Rights, that among these are Life, Liberty and the pursuit of Happiness.”

America is not perfect but this one sentence proclaims and establishes the exceptionalism of America. But if you’re an American citizen, regardless of your skin color, ethnicity, socio-economic status, or the neighborhood you live in, you and I are privileged. I suppose it’s easy to question or even attack this statement. But if we examine the facts, there can only be one conclusion:

Being an American grants a “red, white and blue” privilege that trumps most of the privileges of the rest of the world’s population.

While I am not supporting Ben Carson for President, I believe he expressed my exact sentiments yesterday when he said, referring to the billion dollar Powerball jackpot, “I already won the lottery. I was born in America and I know the Lord.“

I would assert that this privilege is beyond simple economics, but there is a financial privilege, no doubt, to living in America. In fact, these two articles, Forbes’ “America’s Poor Still Live Better than Most of the Rest of Humanity” and New York Times’ “The Haves and the Have-Nots” provide evidence to support the fact that all Americans enjoy financial status above that of the majority of the world. In particular, the Times article points to a crucial fact in reference to its chart: 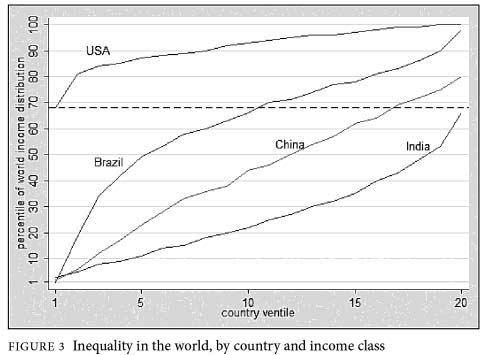 “Now check out the line for India. India’s poorest ventile corresponds with the 4th poorest percentile worldwide. And its richest? The 68th percentile. Yes, that’s right: America’s poorest are, as a group, about as rich as India’s richest.“

Sadly many in our nation today challenge the belief that there is a unique privilege afforded to all Americans. Just last week the following question was posed by a Hispanic college student to Hillary Clinton: “Can you tell us what white privilege means to you and can you give me an example from your life or career when you think you have benefitted from it?“

Mrs. Clinton began her response with the following statement: “I think it is hard when you are swimming in the ocean to know exactly what is happening around you so much as it is when you’re standing on the shore perhaps watching.” She went on, though, to suggest that the ocean to which she was referring was the ocean of white privilege and how “lucky” she had been to be raised where and how she had been.

While I reject much of what Mrs. Clinton stated, if you consider Mrs. Clinton’s first response, that of being in an ocean, I suppose there is some truth to this, if we consider our status as Americans. When someone has never left America to see the status of up to 70% of the world’s population, the conditions others live in, the oppression they endure, and their utter hopelessness, it’s easy to not realize or even comprehend the red, white and blue American privilege. In truth, the minute you leave the “ocean” we call America and look back from the shores of most other nations, one can immediately realize the privilege to which I speak.

Of course, I would be foolish to believe that the opportunities I had as the son of missionary parents with few financial or societal perks while growing up could begin to compare to an Ivy League educated and Trust Fund supported child whose parents have all the connections necessary to pave his road with gold bricks. At the same time though, neither would I suggest that my having had a stable family, where my parents have shared a loving, God-honoring marriage for over 61 years, doesn’t perhaps give me a leg up over the inner city boy who never met his Father and hears gun shots reverberating through the walls of his subsidized housing.

The truth is that while we all share differing and unique backgrounds and the environment in which we were raised or find ourselves in may be at polar opposites, if we call ourselves Americans and we truly desire to improve and advance our status and that of our family’s, our exceptional “red, white and blue” privilege both affords and enables us the opportunity to do such, unlike any other nation in the world. And the sooner we reject divisive ideologies that undermine the real privilege we all enjoy, the sooner we will begin to achieve our aspirations while working to establish the “more perfect union” to which our founders referred, in this America the Beautiful.