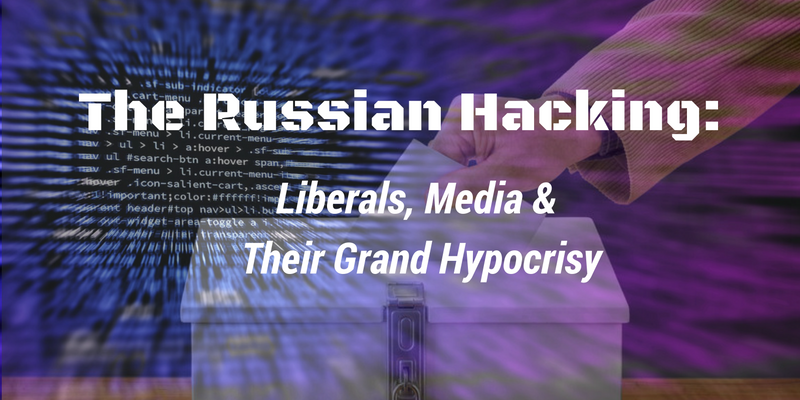 Over the last several weeks the media has been consumed with the Russian hacking story, suggesting that the nation that has been our adversary for the last century somehow sabotaged our free elections and contributed to the defeat of Hillary Clinton by Donald Trump.  Of course, the Clinton camp and its supporters have been pushing this story since Hillary’s defeat in November.

Everyone should be concerned about allegations of our elections being corrupted in some manner, whether that corruption comes from a nation state or from some other sinister effort.  But it is the height of hypocrisy when certain groups become incensed when their candidate loses but they dismiss electoral malfeasance when their side wins.  By certain groups, I am referring specifically to liberals, Democrats, and their willing supporters/accomplices, the main stream media.

First let’s address what the specifics of the Russian “hacking” episode actually was.  There has been a steady drumbeat of reports from media sympathetic to Hillary Clinton, inferring that the Russian hacking interfered in and impacted the results of our election.  To be clear, there is no evidence that any potential hacking changed the outcome whatsoever.  Furthermore, the hacking was not in any way related to voting machines or anything that occurred on election day.

The incident in question stemmed from the hacking by Wikileaks of emails accounts for a number of Democratic leaders, including the Democratic National Committee.  Those emails, leaked months ago, exposed the sinister efforts of leaders in the Democratic party to undercut Hillary’s main challenger, Bernie Sanders.  But the media, rather than focus in on the corruption of the DNC and Hillary, chose to focus on the actual hacking event itself.  So Hillary gets a pass, but a foreign entity doesn’t.  And consider that had Hillary won, the wrongdoing by the Democratic party would have gone literally unchecked by nearly every main stream media outlet.

As I’ve considered the sudden concern by Democrats and the media over election tampering or illegal activity, I’m reminded that these are the same people that have ignored or scoffed at other blatant scenarios that are unquestionably impacting elections, and regularly resulting in illegal votes being cast on a growing scale.  Here are just a few of the more obvious examples of the utter hypocrisy of Democrats and the media regarding the integrity of the electoral system:

Democrats have consistently resisted any idea of requiring voters to register.  Contrary to their allegations though that voter registration is a malicious scheme by Republicans and conservatives to disenfranchise voters, particular minorities, the truth is that registration is designed to protect the integrity of our electoral process.  Why is it we never hear complaints by Democrats, the media or other organizations about the reality that government issued ID’s are required to travel, cash checks, check into a hotel, or to even visit the White House.  But when one of the foundations of our Constitutional Republic, the voting booth, is at issue, Democrats put up a level of resistance not known since the 300 Spartans at the battle of Thermopylae?  (As a little reminder, comedian Ellen DeGeneres was recently barred from entering the White House because she failed to bring along her ID, as she noted in a recent tweet.)

Presently, the cities in America that are known as sanctuary cities are under the control of Democrats.  To be clear, a sanctuary city is one where the city’s officials ignore federal law and shelter illegal aliens from federal prosecution.  So as you weigh the sincerity of Democrats’ outrage over the Russian hacking scandal, consider that these are the same folks and Party that not only routinely defy the law and enable illegal aliens to remain immune from federal prosecution, but following Trump’s election, many Democrat officials in sanctuary cities have doubled down on this illegal tactic.  Of course, the tactic is ultimately about the following issue, which directly undermines our electoral process.

While there is no evidence that Russian hacking resulted in any votes being defrauded, there are numerous reports that voting by illegal aliens is occurring.  While the numbers vary widely, with some alleging that as many as 3 million illegals voted in this most recent Presidential election, it should not matter if there are 3000 or 3 million.  Yet, whenever the topic of illegals voting is raised, most liberals and Democrats brush it aside as far-fetched or unthinkable.

Consider this though.  For every illegal vote that occurs, one legal vote is marginalized.  So if you arrive at the polls at the same time as an illegal voter, and you both sit down in voting booths adjacent to each other, it’s highly likely that your vote, particularly if you are a conservative, was just cancelled out by the illegal in the booth next to you.  Yet, many Democrats not only turn a blind eye to any such happenings, but they knowingly enable it.

If the allegations that Russian hacking impacted the results of the 2016 Presidential election really held any merit, then there’s one statistic that should totally discredit the theory.  Democrats have been quick to continuously howl that Hillary Clinton won the popular vote, suggesting that Bill’s wife was really the choice of the majority of Americans.  In so doing, Hillary, the media, and her supporters have sought to infer that she is the pick of Americans.

The fact that Hillary won the popular vote would suggest that the Russian hacking was a failure.  Had they succeeded in their quest to enable a Trump win, the popular vote would have turned in Trump’s favor.  Yet it did not.  But why confuse people with the truth?  Instead, liberals, bolstered by the “public outreach” arm of their party, the media, have repeated the lie of the Russian hacking story with such consistency and deceit, that once again, many of the American people have bought their lie, hook, line and sinker.

It was Joseph Goebbels, Hitler’s propaganda minister, who said, “If you tell a lie big enough and keep repeating it, people will eventually come to believe it.”  Democrat leaders have learned this strategy well enough.  And the sad truth is that most Democrats are not really concerned about maintaining a fair and honest electoral process.  Rather, they are merely interested in insuring that whatever strategies they can use to gain an unfair and even illegal advantage remain intact.

I'm Mad As Hell so I'm voting for...
Why Jesus Did Not Seek to Change the Political
The Utter Selfishness of Radical Feminists