Target’s War on Women, Little Girls and You 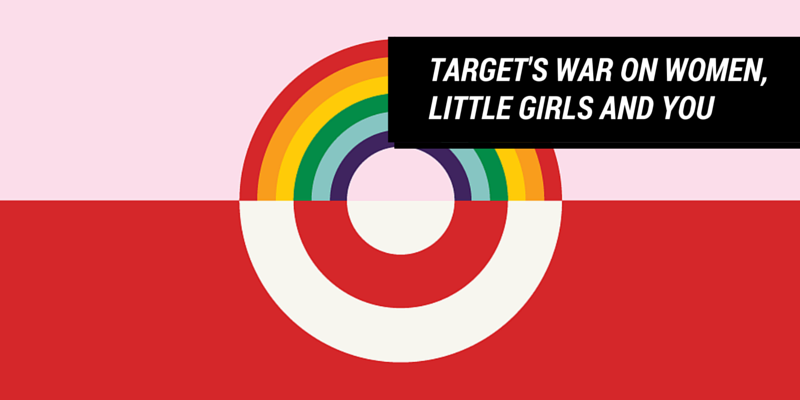 If you’ve been half awake the last week you’ve no doubt heard about Target’s recent pronouncement where they “welcome transgender team members and guests to use the restroom or fitting room facility that corresponds with their gender identity.”  The phrase “gender identity” is code for a person who rejects his or her biological gender at birth as male or female and chooses to act out the opposite of their own physical reality.  Thus a male (boy or man) will feel as if he is a female (girl or woman) — regardless of the truth of his/her own anatomy.  Consequently, he will begin to act and make decisions in a manner that is at odds with the truth of his gender.

Gender identity is the ultimate rejection of absolute truth, just one more sign that our culture has gone all-in on moral relativism and continues to reject not just basic common sense, but more importantly God, the Author of gender.

While Target’s decision tells us a lot about our culture, it also speaks volumes about the second largest discount retailer in the US. There are serious implications for Target, and you, that will naturally flow from Target’s new policy, that they boast is “inclusive” and something they “celebrate.”  Let’s look at just a few of the implications from Target’s celebration.

Target’s foolhardiness is playing with your safety

We are truly in new and unchartered territory with Target’s announcement.  Restrooms and fitting rooms that have always offered privacy from members of the opposite sex will no longer operate as such.  Target has, under the faux banner of “inclusivity, non-discrimination, and respect,” chosen to exclude, discriminate and disrespect millions of women and men who would frequent their stores.

The privacy afforded to men and women, boys and girls, is no longer a given at Target.  Now, a woman or little girl may be in a stall, and a man who simply claims he “feels” like a woman, can enter the stall directly adjoining the woman or little girl.  He may simply choose to relieve himself.  Or worse, he may have more sinister activities in mind, including peering over or under the stall divider, as your wife or daughter believe they are being afforded their privacy.  This is no theory or hypothetical as there are already many instances of men entering women’s restrooms with evil intentions and preying on innocent women and girls (linked at bottom of this post).

Ironically, Target boasts that “everyone deserves to feel like they belong, and you’ll always be accepted, respected and welcomed at Target.”  Yet, what respect are they showing for the mother, wife, daughter or even boy who simply desires their privacy when they enter a Target restroom?  What respect have they shown for the 12 year old girl, who will now be exposed to a male predator.  And the reason for this exposure is due to Target’s new policy, that allows “feelings” rather than reality to destroy privacy barriers that have existed for millennia.  Simply claiming identity as a woman, a lie based on a mental delusion, becomes the basis for a man using the woman’s restroom.

Americans are known as people with a propensity to litigate damages and injustices in court.  And the legal profession has been more than eager to pursue opportunities to target mega-corporations whose policies jeopardize a customers’ safety and welfare and result in actual harm to that customer.  In time, there will be instances where someone using a Target restroom or fitting room, exploits Target’s “inclusive” policy to willfully prey on and sexually assault an innocent victim.  While a crime of this nature is heinous, what is perhaps even worse is the fact that Target’s CEO Brian Cornell (whose compensation last year was $28 million) and his team will be willing participants in this crime, as corporate enablers of such a tragic incident.

It is not too difficult to predict that Target will be the target of powerful legal firms as they seek to hold Cornell, his team and the corporation they lead, Target, financially liable for the harm caused to their customers as a result of their negligent and dangerous policy.  It’s ironic that the company whose logo is a bullseye, will soon be directly in the crosshairs of a legal profession who is more than eager to prey upon vulnerable, corporate giants.

Target will lose billions in revenue from #BoycottTarget

In this era of boycotts and online petitions, it’s fairly routine to see campaigns targeting corporations, politicians, legislation and more.  So it was no surprise that the American Family Association launched its own Petition to #BoycottTarget.  In just a few short days, their petition has grown to over 800,000 signatures and it is continuing to mushroom by the thousands every hour.

According to Perfect Price, a database of billions of credit card transactions, the average dollars spent per trip by Target customers is $62.  So I’ll use a very conservative calculation to extrapolate the impact of the #BoycottTarget Petition so far. Assuming that the average customer makes two trips per month (a likely conservative number), and the signatures grow to one million in another day or two, we arrive at $1.5 billion dollars in lost revenue annually to Target.  But we should also consider that most people who decide to move their business from Target to some other retailer will likely never sign a petition.  They’ll simply leave Target in disgust as they see a company that has abandoned common sense values.

So it’s not far fetched to conclude that at the end of the day, the total financial impact to Target will be $5-10 billion in lost revenue annually, approximately 10% of their annual sales.  And in a nation where dollars reign supreme, perhaps this is one way you and I can make a difference in this whole debate.

One other way you can directly punish Target relates to your 401K or other investment vehicle.  Call up your broker or financial adviser and ask him to sell any of your Target stock (TGT).  Dumping your investment in this company will also send a strong signal to both Target and the rest of the mega-corporate world that they should keep their nose out of the social battles and simply focus on selling their products, period.

There is a verse in Ephesians which states “Have no fellowship with the unfruitful works of darkness, but rather expose them.” When you #BoycottTarget you have broken fellowship with a corporation whose works peddle in darkness.  And when you share info about the boycott and inform others about Target’s debased policy, you are exposing them.

Your engagement and response to Target’s recent policy may determine whether Target is punished for their aberrant choices and made an example to many other left-leaning corporations or whether Target will pave the way for hundreds of other companies and organization to follow suit.  The jury is out and many would-be followers are waiting in the shadows, assessing whether the public will rise up and in solidarity express their vehement outrage over Target’s targeting of women and little girls.  If Target is made to pay for their dangerous policy, then others may think twice.  But if not, then the tidal wave will follow and the relatively small level of decency left in our nation will be gone.

Will you take action?  I trust you will by signing the AFA Petition to #BoycottTarget, joining over 800,000 other shoppers who have said NO to Target.

Links to news stories (from Petition):

Hagerty v Sethi: Who to Vote For?
Drowning in Fear? How to Find Peace in the Midst of an Electoral Storm
Is $10 Trillion in New Debt Coming as Republicans Take Control?