The Fat Lady hasn’t sung yet. Why the Constitution will Trump Donald. 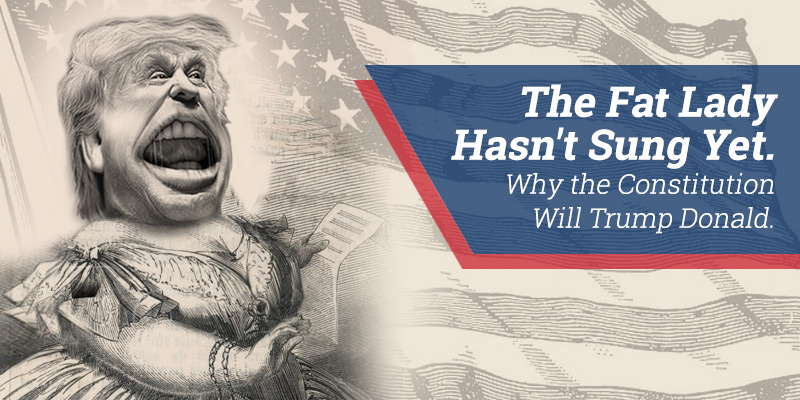 As a majority of the nation’s voters have yet to vote in the 2016 race for the Republican nomination, we have heard the cry by many that Donald Trump is inevitable, and his victory is a foregone conclusion. At the same time, many who oppose Trump’s candidacy have begun the #NeverTrump effort to announce that should Donald win, they will find another candidate to support. I too have embraced the #NeverTrump effort in affirming my commitment to certain values and principles that are non-negotiable to me. If one is honest and objective, they must also conclude that Trump’s 40+ year track record reveals he has consistently opposed and vigorously funded the defeat of constitutional conservative values.

But regardless of your views on Trump, one thing is certain, the fat lady has not yet sung.

It’s helpful to have facts to back up your views, but at the end of the day, in order to win a battle, a General needs not only a winning strategy, but he needs the troops to deploy that strategy. And that’s where you come in. If you care deeply about your nation; and if you believe the commitment level of our Founders, which led them to pledge their “lives, fortunes and sacred honor” shouldn’t be limited to them; then, in order to “secure the Blessings of Liberty to ourselves and our posterity” you and I must also be prepared to do more than simply share articles on Facebook (although go ahead and share this one) and debate opinions with our friends and family. At the end of the day, Ted Cruz, the only consistent Constitutional conservative needs You to help deploy his strategy. And here’s how:

Finally, will you share this post with others either via your email or on Facebook? Let’s get the word out that the fat lady has yet to sing. And if we all do our part we can in fact see the Constitution trump both Donald and the forces in both parties who have been undermining our founding principles for too many years.

Should a Christian Vote for the Lesser Evil?
Daniel, Government, God and You
If You Reject Hillary & Trump Here are Some Options