Too Many Citizens, Too Few Soldiers 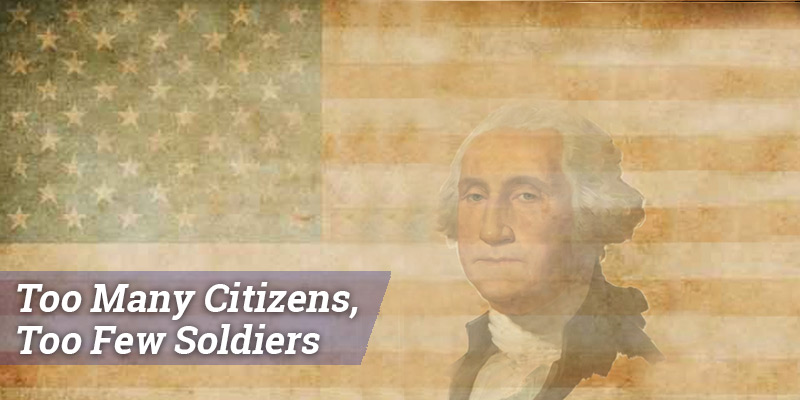 It was the summer of 1775, and the colonists in America were facing the growing threat of tyranny by their government. The new life they sought was in serious jeopardy by King George III, a man whom the colonists one year later described as having “a history of repeated injuries and usurpations, all having in direct object an absolute Tyranny.”

During that same summer, the New York Legislature sent a letter to General George Washington, who had just recently been appointed the Commander in Chief of the Continental Army. In the letter, Washington was commended for “taking up arms… in the glorious struggle for American Liberty.” The Legislature acknowledged the reality that Washington had the “character of our worthiest citizens” as he was answering the call of a people in trouble.

Washington’s response to the NY Legislature’s letter was a short 159 words, but the message he delivered is one, I believe, many Americans have forgotten but need to hear:

“When we assumed the Soldier, we did not lay aside the Citizen; and we shall most sincerely rejoice with you in that happy hour when the establishment of American Liberty, upon the firmest and most solid foundations, shall enable us to return to our Private Stations in the bosom of a free, peaceful and happy Country.”

In his letter, Washington was affirming that while he was indeed a citizen, he had also assumed the role of “soldier” given the reality that his homeland was threatened by a government that sought to squelch the liberties of its citizens via the unjust laws and tyranny it imposed. While Washington acknowledged that he looked forward to returning to his status as mere citizen, he clearly viewed it as his personal responsibility to defend liberty and combat tyranny.

In our modern era of every imaginable convenience and comfort known to man, I fear our nation has produced too many “citizens” and too few “soldiers.” By soldiers, I do not mean the brave men and women who have been defending our nation from enemies abroad. These men and women of our military deserve, without question, our unwavering admiration, loyalty, and support.

But the soldier to which I speak are the men and women who understand the times in which we live, they see the threat posed to our individual and corporate liberties, and they realize that their status as citizen is only secure if they willingly rise up as soldiers to defend the foundations upon which their citizenship relies.

This soldier does not bear arms with actual bullets and bayonets. But he does arm himself with the truths of our founding. He is prepared to engage to inform and educate the youth of our nation, who sadly, in too many instances are being offered distorted lessons of our nation’s heritage. This soldier engages in the marketplace of ideas, confronting views that seek to malign our nation at every turn. This soldier will even step forward to answer the civic call of duty, whether in elected office or simply by engaging with other citizens to enlist them in this battle.

While we do find evidence of such soldiers still engaged in the battle for the soul of our nation, they are sorely lacking. Truthfully, I fear we have too many citizens and not enough soldiers in this seminal battle to push back those ideologies and institutions which seek to undermine our foundational liberties and principles.

Without Washington, Jefferson, Adams, Madison and so many more of our founding fathers, we would not be experiencing the blessings we enjoy in this 21st century. But the truth is that there were thousands of other unnamed soldiers who stood alongside our founding fathers. These nameless soldiers willingly set aside their status as mere citizens, and they picked up the mantle of soldier. And to these thousands of unknown soldiers we owe our very existence and the blessings of liberty that we still enjoy to this day.

But what about our offspring in 2116, one hundred years from now? Or what about our children and grandchildren just a decade or two from now? Will they continue to benefit from the liberty that we have so abundantly inherited? Or will the flame of liberty flicker and be extinguished on our watch?

The answer to these questions can be summed up in one question that only you can answer. Will you pick up the mantle of soldier and engage in the battle that is likely determining the very survival of our Republic? Or will we continue to suffer excruciating losses as too few citizens fail to answer the call to engage as a soldier in this battle?

There is a verse in the Bible that refers to a group of very astute men who also recognized the dire needs of their nation. In 1 Chronicles 12:32 we read this: “the sons of Issachar, men who understood the times, with knowledge of what Israel should do…”

Are you such a person? Do you understand the times in which we live? If so, then I pray that you will step forward and enlist in this epic battle. There will be ample time in the future to return to our role as citizen. Today though, a soldier is desperately needed. Will you enlist?

Party, Principle or Pragmatism? What Drives the Tea Party?
Leaving a Legacy: The Day After
Can Ted Cruz Really Win? Absolutely & Here’s How