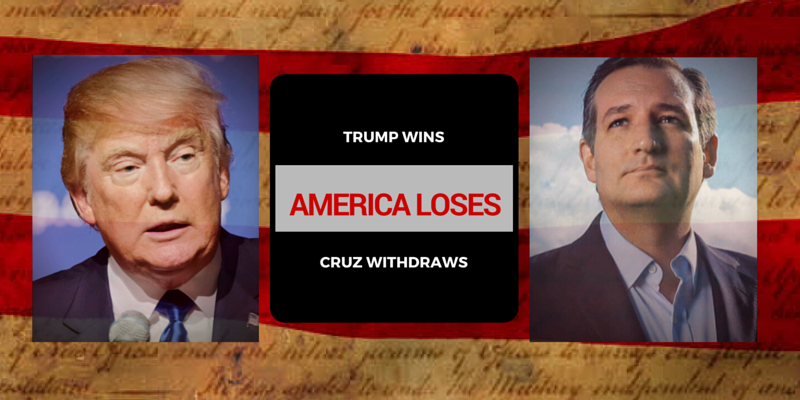 While the nation’s Trumpsters celebrated Tuesday night, I’m reminded of another celebratory night in November 2008 and again in November 2012.  The cause for jubilation those two nights was another politician’s victory — the occasion of Barack Obama’s two elections to POTUS.

But every win is not progress.  And every victory is not a cause for celebration.

We have only to consider the years since Obama’s election in 2008 to understand that sometimes winning is losing.  And some victories can be defeats.

Trump’s pending coronation as the Republican nominee for POTUS, is one such loss and one such defeat.

It is a loss for the conservative cause as defined by Ronald Reagan’s three legged stool.

It is a defeat for social conservatism.

It is a loss for fiscal conservatism.

It is a defeat for a strong national defense.

And as such, America loses with Trump’s win on Tuesday.

As we’ve all learned in life, sometimes good guys do finish last, at least in the short term.  And this week, Senator Ted Cruz was one such good guy.  For those of us who have honestly examined Ted’s character, we have found a man of great integrity, with an unquestionable track record of fighting evil, defending good and standing for truth.  Yet he lost.

But did Ted really lose? If you measure one’s life simply based on popularity, votes and the affirmation of man, then I suppose so.

But I know Ted, both from spending time with him and Heidi, as well as examining his record.  And by doing so I know that Ted has kept the faith, he has fought the good fight, and at this point, while he may have lost a battle, I have full confidence that he has not lost the war.

So I am not discouraged.

You see, I’m a firm believer in the truth we find in Ephesians that informs us that “we do not wrestle against flesh and blood, but against principalities, against powers, against rulers of the darkness of this age, against spiritual hosts of wickedness in the heavenly places.”  Because of this we are reminded to “be strong in the Lord and in the power of His might.”

So the real battle is not with the Republican Party, or Donald Trump, or even Donald Trump’s supporters (although they can certainly test our patience at times).  No, the real battle is a spiritual one, in which we are all engaged, whether we recognize it or not.  And sadly, that battle is being lost in our nation as a growing number of our neighbors, friends and citizens reject good men and women, choosing rather to embrace evil, corruption and depravity, on a larger and grander scale.  And as they do so, they call evil good and good evil.

Case in point: the embracing of Donald Trump, Hillary Clinton, and so much more.

But while the values many of us hold dear and which were foundational to the forming of our nation are being lost, we can still win individually.  You see, real winning is not measured by a poll or in a voting booth or even having the last word in a heated Facebook discussion.  Rather, real winning according to God, is obedience to Him and His commands.  And a follower of Christ is not called to win politically (although we must certainly engage politically).  Rather we are called to reflect our love for God by simply obeying Him as Jesus instructed us to do when He said: “If you love me, keep my commandments.”

So as Americans continue to reject God’s values on a greater scale, and our nation loses more and more, you and I can win by simply obeying.  But honestly, obedience to God is a lot more difficult than simply voting for POTUS every four years.

But I would suggest that is where the real battle is, not in the political arena, but rather in our personal lives.  And if we’re honest with ourselves, we probably already know this.  The battles that are the toughest are not those I wage with a political opponent.  No, the toughest battles that you and I will ever face are those within our heart, mind and will.  And perhaps that’s why America is losing.  Because too many of us have lost too many battles in our own lives.  We’ve first failed to obey God individually.  And as this behavior becomes the norm, our nation loses.

Thankfully though, the answer is simple as we are instructed in 2 Chronicles 7:14 “If My people who are called by My name will humble themselves, and pray and seek My face, and turn from their wicked ways, then I will hear from heaven, and will forgive their sin and heal their land.“

And when we do that we can expect to hear those winning words:  “Well done, good and faithful servant.”

A Second American Revolution: Defeating The Enemy Within
The Party of "Lower Taxes" Raised Taxes in Tennessee
Mother's Day - A Tradition that Affirms the Sexes