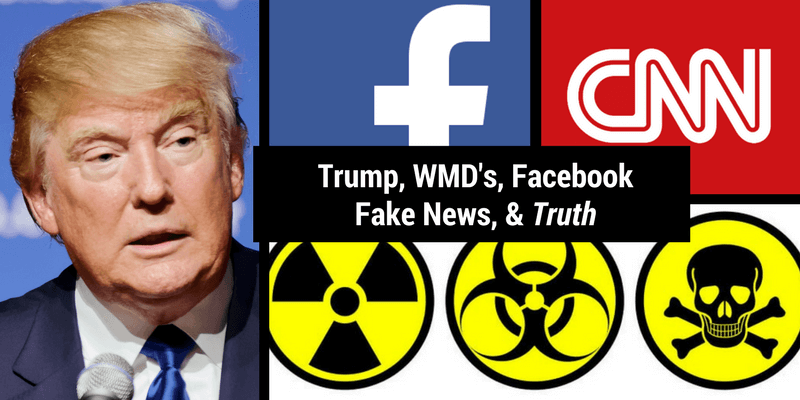 You might ask what do all these disparate subjects have to do with each other. Honestly, I could have listed a host of other subjects that, at first glance, might have appeared to have had absolutely no correlation. But hang with me and hopefully I’ll tie them all together.

During the Presidential campaign in 2016, and the years leading up to it, Donald Trump, the candidate and citizen, made a number of claims that, now as he is President, appear to have been untrue… or else Trump just changed his mind.  While there are many promises one could point to, the most recent example is Trump’s views of Syria over the years. To be clear, this article is not about whether launching a strike on Syria was a good decision or not, but rather about the reality that a politician will tell you one thing when seeking your vote, but once elected, those promises are worth as much as the money the Federal Reserve prints.

A number of years ago the phrase, “Bush lied and people died” was regularly leveled at our 43rd President.  The basis for this view was the perspective that President George W. Bush lied about WMD’s as a pretense to invade Iraq.  The left, the media, and even many republicans and libertarians, asserted that there were never any WMD’s in Iraq.  While the intent of this article is not to re-litigate this decade old debate, it should be noted that there are numbers of reports that purport to validate that WMD’s were indeed in Iraq, including the notion that many of them made their way to Syria.

Facebook touts nearly 2 billion active users.  That’s a lot of people sharing photos, personal tidbits, recipes, and untold other stories.  But Facebook has become a major purveyor of articles that are either totally false or are highly suspect.  In fact, Facebook has now set up a manner for its members to report false stories to them. So if you are suspicious, report the post to the Facebook police, and they’ll investigate the authenticity of the article you reported. Which doesn’t mean you’ll get the truth. Rather, you’ll simply get what Facebook wants you to believe is the truth.

Over this last year, a new phrase has become commonplace:  Fake News.  One news source asserts another one is false.  Websites now evaluate the claims of others and rate them with Pinocchio noses; the more noses, the greater the lie.  And even our President has become accustomed to referring to media outlets he views as his adversaries, like CNN, as “Fake News.”

It seems that in the age of Google, Siri, instant access, and terabytes of data, man is no closer to understanding the truth of a matter, than when man was carving images on cave walls.

And that’s the tie between all these seemingly unrelated topics.  TRUTH.

So what is the truth?  That’s the question we should be asking ourselves over and over.  Regardless of where we read or hear a story reported, we should be skeptical, in a good way, of claims we hear in our polarized world today.  There is nigh a person, group, party, or nation, who doesn’t have an agenda to push, or a perspective that they cling to.

We all want the truth.  But do we have it? And even more importantly, do we present the truth in what we live out everyday in our lives?  This is a question I am asking myself in my own personal life.

I’m reminded of these verses in Isaiah 59 that seemingly foretold this present age:

We know we have rebelled and have denied the Lord.  We have turned our backs on our God.
We know how unfair and oppressive we have been, carefully planning our deceitful lies.
Our courts oppose the righteous, and justice is nowhere to be found.
Truth stumbles in the streets, and honesty has been outlawed.
Yes, truth is gone, and anyone who renounces evil is attacked.
The Lord looked and was displeased to find there was no justice.

If you take the time to read the entire chapter in Isaiah, you will find a myriad of societal problems that flow from a rejection of Truth. When we reject Truth, we are in essence rejecting God.  Our problems now, as they were in Isaiah’s day, are pervasive.  No, they are not limited to Donald Trump, or WMD’s or Fake News.  If our government merely reflects its people, what does that say when our politicians routinely distort the truth?

So is there a solution to our Truth problem in America?  Well, you and I cannot change Trump, or the Fake News sites, but we can individually commit to pursuing Truth in our own lives. As we do that, we will have taken the first step in the direction of Truth.  And as we do, “the Truth will set us free.”

Target’s War on Women, Little Girls and You
Where is America’s Joseph?
Noah, The Ark, & a Rowboat