As Trumpism Replaces Conservatism: Is the Party Over? 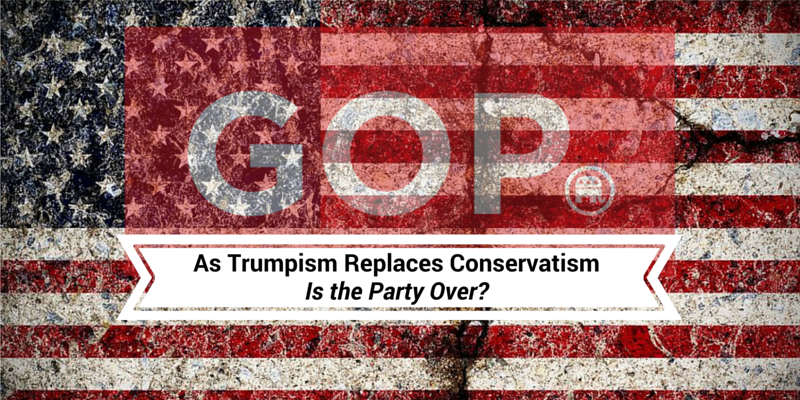 It was Tuesday, Day 2, of the Republican National Convention in Cleveland, OH.  I was sitting comfortably in the middle section of the arena directly in front of the podium.  Chris Cox, a representative from the National Rifle Association, had just stepped up to speak to the crowd of delegates, activists and media.  As Cox began his speech and stated, “You have to be able to protect yourself and your family…” I found myself being distracted by the fellow sitting next to me.

Could it be?  Was the guy actually booing?

My attention turned from Mr. Cox’ speech to the grumblings of the guy next to me.  I couldn’t contain myself any longer.  In disbelief, I asked the 40+ year old fellow:  “Are you a Republican?” No answer.

So I asked him again, “Are you a Republican?”  Rather than answer, the fellow rattled off, “The Second Amendment isn’t about self defense.  There are way too many guns in our nation.  Guns are too readily available.  Besides, guns don’t really offer protection for people at home.”

Wow!  It’s normal to hear those talking points and attacks on the Second Amendment from Democrats. Or Black Lives Matter.  Or CNN.  Or Barack Obama.  Or Hillary Clinton.

But at the Republican National Convention, the gathering that theoretically represents the heart of the GOP?  I did not expect to hear people booing when a speaker was endorsing the Second Amendment and the right to bear arms.  Yet there he was, this guy named Bill.  Right beside me.  And Bill’s entourage included eight other individuals.

I politely asked Bill if I could ask him a few questions since I was puzzled over his response to the Second Amendment. He said sure.  I told him I had been a long time conservative activist so I was curious to get his thoughts on some issues.

“Do you mind me asking who you voted for the last two Presidential elections?” I asked.

I followed up, “What state are you from and have you ever voted Republican?”

“I’m from Maine and no, I’ve never voted Republican before,”  Bill acknowledged.

Bill continued, “Well, I’m fed up with Obama, and Hillary is crap.  I like what Trump is saying and so that’s why I’m here and supporting him.”

I shared with Bill that some had suggested that while the Republican Party was attracting new voters into the fold, many of them did not share the fundamental, core values of the Party and that it sounded like he was one of them.  He agreed that he fit that characterization.

Our conversation was cut short because one of Bill’s buddies interrupted and Bill went over to talk with him.  But this brief exchange affirmed to me exactly what I and many other conservatives had warned of and read about.

The party of Lincoln and Reagan now cares little about Republican values, and more about votes.

Many of the new voters are ones who do not affirm the historical principles of the GOP, such as the Second Amendment, Religious Liberty, Traditional Marriage, Free Markets, Right to Life, Freedom, Respect for Constitution and more.  In fact, one article calculated that as many as 12 million Democrats had voted in the Republican primaries.

While any political party must be able to appeal to a myriad of voters, it should seek those voters based on the soundness and superiority of its message.  For the GOP, that message has historically been one of conservatism.  But in 2016, the GOP has clearly chosen to sacrifice conservatism on the altar of Trumpism, refusing to stand on principle and thus falling for whatever meets the voters fancy.

In contradiction to this assertion, some will proudly point to the Republican Platform as one of the most conservative-friendly platforms in years.  Yet, platform principles mean nothing if they are not respected and followed.  Claiming to be a Christian means little if one does not seek to align his life with the Christian “platform” we call the Holy Bible.  Likewise, given the fact that Republican elected officials have ignored the GOP Platform for decades, it stands to reason that the Platform is merely for show and will have little if any bearing on the future behavior of the party and its nominee for POTUS, particularly considering that the nominee’s own track record is at odds with the Platform.

In a recent article by Ben Shapiro, he offered this analysis:

Trump’s campaign manager, Paul Manafort, recently stated that Trump “has changed the face of the Republican party.”  Never truer words were spoken.  That face no longer resembles the party of Lincoln or Reagan.  It’s conservative heart has been ripped from its core and in its place, a new heart has been transplanted, whose guiding value is revealed in one of Trump’s most famous quotes:  “We’re gonna win and we’re gonna win big!”  Principles, truth, virtue no longer matter.  Conservatism is a thing of the past.  Winning is all that matters.

But when winning becomes the sole objective, one has already lost.

So as we witness the unraveling of the Grand Old Party, we should brace ourselves for the shredding of the red, white and blue and the coming loss of Liberty.  For in the words of Founding Father Benjamin Rush, “Without virtue there can be no liberty.”

Your Vote Counts... But Not For the Reasons You Think
The Bible, Guns & Self-Defense
Election 2016: The Most Critical one of Your Lifetime?