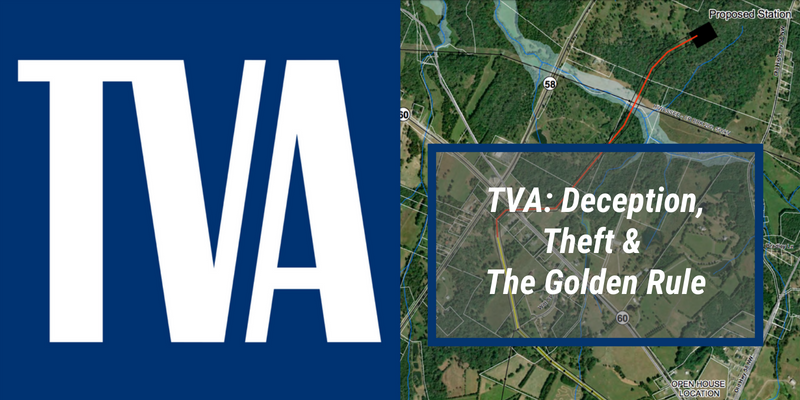 Oftentimes in life, the values we claim to hold are tested in ways that may not always be apparent.  But when those tests come, it may reveal that the values we lay claim to, are often not the ones we put into practice. (Sadly, I know this to be true in my life all too often, when I’m honest enough to acknowledge it.)

This truth has been playing out in our community for the last couple weeks in a way that perhaps you’ve never fully considered.  The issue at hand is an effort by TVA to “appropriate” private land for its “greater” use.  For those who are not familiar, TVA is a nearly 90 year old federal agency that provides electricity to nine million customers across seven states, and operates annually with a multi-billion dollar budget. 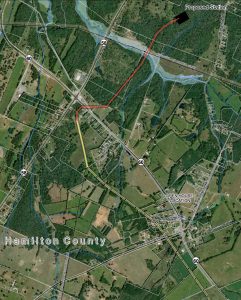 The controversy involves TVA seeking to extend an electrical service line across the land of a personal friend and local businessman, Greg Vital.  Amongst Greg’s many business holdings is farmland in Georgetown Tennessee, which is home to his buffalo operation.

What is unknown by many is the fact that TVA purchased a parcel of land over a year ago. Their plan at the time targeted Mr. Vital’s property as the route to extend their power lines across, to reach their newly purchased parcel.  But only in the last couple weeks did TVA finally inform the public, including Mr. Vital, of their plans to appropriate his land for their proposed project.

If ever there was a David vs Goliath battle, this is it.

At a public meeting this last week, I had the opportunity to meet with several TVA representatives to ask questions as well as express my objections to the manner in which they had contrived their plans.  While the TVA reps were pleasant, it was clear that they were less than forthcoming with some of their answers.

The concept of eminent domain is one that most Americans are familiar with, but it’s likely the majority of us have seldom been confronted with such a threat.  To have an entity that is all-powerful, both economically and politically, confront the little guy, simply because he owns something they want, is an intimidating and often overwhelming struggle.  But in such battles, Goliath is typically the victor and David more often than not walks away with a few stones in his pocket.

Most of us know the Golden Rule, and we would likely claim it as a guiding force in our lives.

“Treat others the way you’d like to be treated.”

But there is sadly another rule that involves gold as well.  It’s this one:

These two “Golden Rules” are clashing head to head in the TVA controversy at hand.

Back to the meeting this last week though.  As I was pressing the TVA folks about their proposed project, the Golden Rule, as taught by Jesus, popped into my mind.  So I asked them a simple question:  “Are you a Christian?”

I then asked them if they believed in the Golden Rule as taught by Jesus, which teaches to treat others the way they wanted to be treated?

“Yes” was again their answer.

So I then asked, “Well, if you believe in the Golden Rule, does it only apply in your personal life?  Or do you also believe it is a principle we should practice in our professional lives as well?  Would you want someone to treat you the way you are proposing to treat Mr. Vital?”

Silence met my answer.  I don’t know if the silence was because they truly did not know the answer, or if it was the reality that the rule they claimed to embrace was being violated by the agency for whom they worked.

As I pressed them further, I asked them if they would ever consider going onto their neighbor’s land with the intent of taking a portion of his land for their own personal use, particularly if that neighbor objected?  Their answer was an obvious “NO” and it illustrated how at odds their personal beliefs were with the TVA plan they were supporting and leading.

It would be easy to blame this controversy on a multi-lettered government agency.  But the truth is government agencies are made up of individuals.  Each individual has his or her own set of values.  If our values are deeply rooted, then they should surface in every area of our lives.  So when we see the strategy of “appropriating” the property of others via eminent domain (another word for theft), and then that strategy is hidden for over a year (another word for deception), one must wonder what values drive the TVA employees who are overseeing and approving of such strategies?  Can they profess their personal dedication to the Golden Rule, integrity, and transparency, while ignoring or contradicting those values professionally?

There’s a story in the Old Testament that deals with eminent domain and it involves King Ahab and Queen Jezebel.  This husband and wife pair were two evil peas-in-a-pod and they regularly defied God and His values throughout their lives.  One day Ahab wanted to purchase a plot of land from a local farmer.  But the man did not want to sell it.  So, Ahab’s wife used the most extreme kind of eminent domain. Jezebel had the farmer killed and then gave his land to her husband, King Ahab.  Ahab got what he wanted while the citizen not only lost his land but also his life.  But that very day God pronounced a fateful judgement on both Ahab and Jezebel.  (Read I Kings 21)

America’s forefathers each pledged their “lives, fortunes and sacred honor” to defend the values of liberty and personal property.  When a government agency uses eminent domain, secrecy, and deception to secure private land from an unwilling party, there is no greater threat to the values for which our founding fathers fought.

I’ve often heard it said by critics of biblical conservatives that they should check their values at the doors when they leave their church or personal residence. But this debacle at TVA should teach us otherwise.  If we claim certain values are deeply rooted convictions, then they should flow over into every area of our lives. Otherwise these values are merely preferences and have little affect in guiding our behavior in all scenarios.

So time will tell which Golden Rule prevails in the “TVA vs Vital” matter.  Will it be the rule taught by Jesus, or the one too many of the elite of our world  love to impose on their neighbors, the power of force and intimidation to gain what the one with the gold desires?

If you want to remain informed or be a part of the solution, you can go to Facebook and Like the Page “Stop Destroying Tennessee Farms” to get regular updates on this ongoing battle.

Possessions, Wealth, & Stewardship: Truths That Should Compel Change
He is Risen... Today Too!
No Greater Love