The Wildly Profitable Gift Shop on the Titanic: The Dilemma 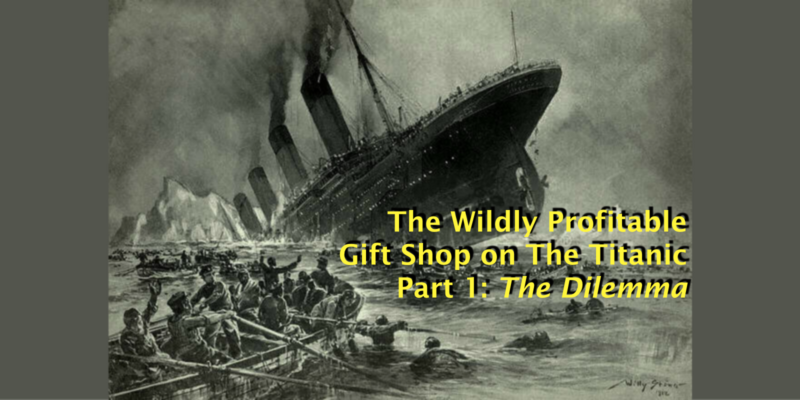 “A prudent person foresees danger and takes precautions. The simpleton goes blindly on and suffers the consequences.”  Proverbs 27:12 NLT

It was April 14, 1912, day 4 of Margaret Fuller’s virgin voyage on board the Titanic. Things could not be better. Her bid to open the only gift shop on the new mega-ship had been accepted three months earlier. She had operated other shops on several ocean liners during the past decade.  As a result, she had achieved some degree of success and affluence from those years of hard work, sacrifice and optimism. 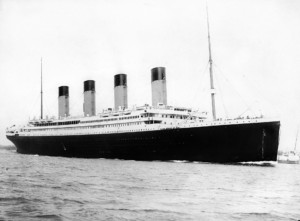 But none of those other shops had begun with such a burst of passenger excitement, which directly translated to record setting sales. In the first three days of the voyage, her shop’s revenue had already surpassed the sales of the last two transatlantic voyages combined. Margaret could not be more pleased.

As she rose early to head up for a quick breakfast before opening her shop, Margaret walked by one of the twenty lifeboats that were stowed securely on the boat’s deck.  For a brief moment her mind flashed back to some reports she had read prior to their departure.  Some had expressed concern that there were more passengers on board than the lifeboats could carry.  But Margaret quickly pushed the thought from her mind, fully confident that a ship the size of the Titanic, with all its safety systems, was completely secure.  It was certainly too big to falter along the 3000 mile journey.

Sales were strong again on that fourth day of the voyage.  The passengers seemed eager to spend.  Their excitement and mood could not be more upbeat.  There were other small business owners and entrepreneurs on board who all seemed to be experiencing the same results that Margaret was realizing.

That evening, Margaret sat down to write down her thoughts in her journal, as she had been doing for several years now:

Day 4:  Life is great.  Another record day.  Sales are phenomenal.  People are happy.  The only concern I have is whether I will run out of inventory on our return trip to England.  Not that such a problem would be bad.  Who would have ever imagined I would sell out my entire inventory?  This new venture on board one of the greatest sea-going vessels of our time is something I could have never imagined.  And the likelihood that anything could go wrong at this point is beyond my wildest imagination.  Well, I better get some sleep.  Tomorrow will be another busy day, no doubt.  Good night diary…

Margaret readied herself for bed, said a quick prayer, and was soon in a deep sleep.

As Margaret slept, she began dreaming that she was hearing sirens going off.  The more she tried to ignore the sirens, the louder they seemed to get.  Soon the sirens were accompanied by a jolting and lurching and she then realized: This isn’t a dream!  The sirens were really going off.  The articles on her dresser had just been thrown across the room onto the floor.  She heard glass breaking in her bathroom as the mirror fell off the wall.  Down the hall, outside her door, she could hear people screaming.

Margaret was now wide awake.  This was no dream.  Rather, it was a real nightmare. As she grabbed her housecoat, and dashed out her cabin door, Margaret’s mind flashed back to the lifeboat she had walked by the day before.  She tried to control a panicked and sinking feeling as she considered the fact that if the lifeboats were needed, she might not make it onto one of them. 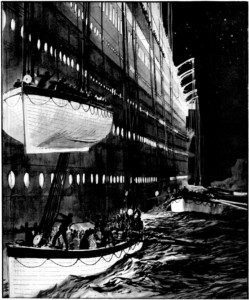 As she shot up the stairs to the main deck, her panic suddenly turned to terror.  Crew members were yelling to everyone to head for the lifeboats, screaming to them that the ship had struck an object of some sort. There was little time before the unthinkable would happen, they were warning.  It was clear the unsinkable ship was going down, and only those who were fortunate enough to scramble onto one of the lifeboats would survive.

As she ran towards one of the lifeboats, the ship suddenly lurched violently, and Margaret was thrown several yards into the air before she  slammed back down onto the deck.  She was dazed and shaken.  Her entire body ached.  But she had enough presence of mind to realize she had to make it to a lifeboat.

Margaret half crawled and half ran to the nearest lifeboat and began to fight her way through the others who were all trying to board it.  She was ashamed of her actions as she clawed her way past other screaming and terrorized passengers.  But Margaret knew that if she were courteous, she would not make it.   As the lifeboat began to swing over the side and above the freezing dark waters below, Margaret lunged for it, barely grasping the edge of the small boat, as a strong arm dragged her aboard.   And then, everything grew pitch black as they descended into the ocean below. 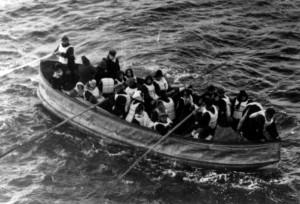 Margaret could hear screams from above.  It was sheer terror and no doubt they were the last sounds that many who were still on board would make.  She was told that the lifeboat they were on was the last one.  There were no more.  Those left behind were no doubt destined for a horrendous fate.

Briefly, Margaret thought about her gift shop, her livelihood, her fortune and her dreams.  They were all going down with the ship.  Just hours earlier she couldn’t have been more upbeat, more optimistic, more confident of the profitable future that was in store for her.  Now, it all seemed so meaningless, so short-sighted, and so mundane.  She hauntingly remembered the warnings some had made prior to the Titanic’s departure about the inadequate number of lifeboats.  She thought about the hundreds of poor souls who were even then sinking to the depths of the Atlantic.  And then she realized the truth.

It was 130 years earlier, during the Revolutionary War, that George Washington commented, in strong disapproval, about how many of our early countrymen put private gain before “the essential rights and liberties of the present generation, and of millions yet unborn.”   Our first President was concerned that a short-sighted focus by citizens could lead to a long-term loss of our most sacred values: Life, Liberty and more.

Like Margaret on board the Titanic, in my fictional story, today’s entrepreneurs, corporate executives and managers are busy about the business of making money, turning a profit and increasing their own personal fortunes.  Obviously, in and of itself, this is not a bad thing.  But as our first President noted, we can often pursue our own private gain at the expense of our “essential rights and liberties.”  Sadly, because of this tendency by too many today, our nation is bearing down on its own iceberg.

In our hearts we all know this.  The sirens are going off.  The warnings are everywhere.

rampant corruption in Washington and our state houses

greed has infected our populace

unrest and violence is growing

ethics and morals have all but disintegrated

religion has little influence in our society

And there are innumerable more warning signs.  And yet, it appears that so many of us are so disengaged.  We ignore the obvious. We are more focused on seeking the profit of our “gift shops” than heeding the perilous warnings.

But unless we wake up before it’s too late, there will be a catastrophic event that will make that last sale, that last promotion, that last quarter’s results, seem so mundane, so futile, so meaningless.

Have we reached the point of no return?  I do not know.

I pray that we can avert the iceberg that appears to be directly in our path.  But you and I will determine whether or not we do. Will we prioritize our private gain?  Or will we, like our founding fathers, prioritize the “essential rights and liberties of the present generation and of the millions yet unborn?”  Our actions today and tomorrow will reveal our priorities, and the destiny of America.

Next week, in Part 2, we’ll explore some practical steps that we can take to avert the iceberg, or, if the worst should happen, what we can do to prepare for such a disastrous event.  But I’d love to hear your thought before then as well so shoot me an email and post a comment and let me know what you’re thinking.  Until then…

Drowning in Fear? How to Find Peace in the Midst of an Electoral Storm
30 Days to Live
As Trumpism Replaces Conservatism: Is the Party Over?