Will the Trump Presidency Touch Down or Crash Land? 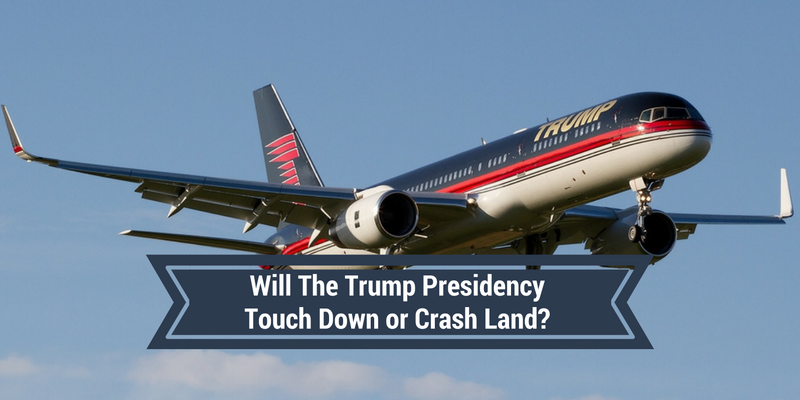 As I peer out the window at the terrain below, jetting over the heartland of America, I cannot help but ponder the future for our nation following the unexpected and historical win by Donald Trump.

We saw so many “firsts” during Election 2016.  The first billionaire to win the Presidency.  The first woman to ever receive the nomination for President of a major party.  The first election where both candidates’ unfavorable ratings were at historical highs.  And so many more.

Today I am indeed grateful to God that we are not referring to Hillary Clinton as President-elect.  If you believe that God is still intimately engaged in His creation, then you understand that Daniel 2:21 was once again affirmed in this election in which we were all given the privilege and responsibility to participate:  “And He changes the times and seasons; He removes kings and raise up kings.”

While I am thankful that Hillary Clinton did not prevail, admittedly I remain a skeptic as to Trump’s veracity, trustworthiness and character.  My concerns will either be affirmed or invalidated in the months and years to come.  And honestly I pray they are proven wrong.  But one thing is certain.  As Donald Trump transitions from candidate to President, some very distinct realities will set in.

If you’ve ever flown, as I am doing today, you know that there can be something magical about soaring 30,000 feet above the earth at 600+ mph, seeing the earth below you whiz by.  The details of all that lies below is indistinguishable from that altitude. Similarly though, if one is glancing up from the ground into the atmosphere, the specifics of an aircraft is also unknown.

What airline is it?  What is its tail number?  Is it a Boeing or Airbus?  Who is inside?  There’s no telling until the plane lands.

But when that silver capsule finally touches down, the answers will become clear.  If there are defects in the plane, they will be exposed. And as the passengers disembark, their true identity will be revealed.

Over the last year, the Trump campaign has been like the jet cruising at 30,000 feet. Its flight plan has been purposefully one of generalities with limited substance dealing in poll-tested, populist issues.  But to an angry and disgusted populace, the vague flight plan proved wildly popular, with statements like these fueling Trump’s flight:

“I will build a great wall on our southern border and I will make Mexico pay for that wall.  Mark my words!”

“Trump is calling for a total and complete shutdown of Muslims entering the US until our country’s representatives can figure out what is going on.”  (Interestingly this statement was removed from Trump’s website 11/09/16, the day after his election.  See here.)

“We’re going to have a special prosecutor for Hillary. If I were President, Hillary would already be in jail.”

But the Trump campaign is now descending from its year-long high altitude voyage, to the reality of a Trump administration.  As the implementation of the billionaire’s vision proceeds, which was strong on emotionally charged rhetoric but soft on specifics, any blemishes in Trump’s policies and flaws in his style and guiding philosophies will quickly be tested and revealed.

Fortunately for Trump, he is landing his Presidency on a “Republican-friendly” runway, given the reality that our new President will be advantaged with a GOP-controlled Senate and House. And while there are many Republicans in Congress who are not fans of Donald, the way in which Trump won will give him the gravitas that many of his predecessors lacked.

So will President-elect Donald Trump touch down in Washington, prepared to govern and deliver specific solutions that are as popular and successful as his campaign rhetoric was in its lacking of those same specifics? Can the reality TV star be accountable to voters to follow through in the drudgery of day to day governing?  Will Trump’s decisions over the next four years remain in alignment with the positions he claimed he supported during his campaign?  Or will President Trump revert back to the antithetical views and values he embraced during the many decades leading up to his Republican “conversion.” Will the dozens of campaign promises Trump made, many outrageous in nature, be fulfilled?  And if not, will his supporters even care?

The answers to these questions will determine whether President Trump’s arrival and tenure in Washington will be a successful and controlled touch down or a disastrous crash landing. For the sake of our nation, our communities and our loved ones, I pray our new President is not only wildly successful, both politically and personally, but that the man who disembarks in Washington is a man of great character and integrity.

“What will it profit a man if he gains the whole world and loses his soul?”  Mark 8:36

The Wildly Profitable Gift Shop on the Titanic - Part 2: Our Response
America: A Grumbling Nation
Protecting a Billionaire President: ISIS & the Trump Empire