Conservatism: Defined by Action not Word 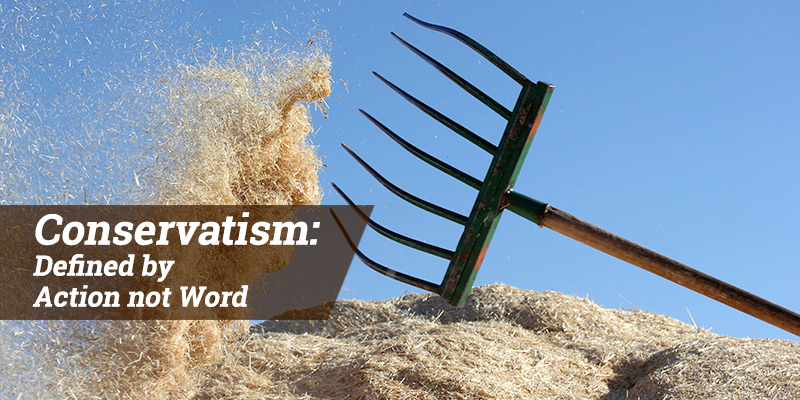 It seems the popular thing to do these days is to declare oneself a conservative, at least, it appears that’s the aspiration of nearly every one of the Republican candidates for President. It’s also true that during nearly every Republican Congressional campaign, the candidates insist that they are the true conservative.

But is the Republican party overwhelmingly represented by conservatives, both in Congress and in those seeking the Presidency? Is it simply that easy: just assert one is a conservative and, voila, he or she is such?

Too often we see the electorate, politicians, and bureaucrats claiming conservatism. But is claiming such enough?

There is a verse that states, “by their fruits you shall know them.” There is not a more appropriate verse than this when discussing or wondering about a person’s true political convictions.

I am humored by the claims of so many Republican politicians that they are “dyed in the wool” conservatives. It’s almost as if it’s a badge of honor to claim such. But we can tell their true colors when it comes to the bills they champion (or fail to champion) and the votes they cast (or fail to cast).

There are plenty of articles from reputable sources that document the voluminous “sins” that are endorsed and funded by this latest fiasco so I will not take the time to reiterate them here. But suffice it to say that the December 2015 Omnibus bill is the poster child for all things progressive and the antithesis of all things conservative.

Following the vote by a majority of the Republican and Democrat delegations in both houses of Congress, Senator Ted Cruz from Texas criticized the legislation saying it “effectively forfeits our massive Republican victories of 2014 and cements Obama’s priorities for nearly the remainder of his term.”

Following years and years of manipulation, deception and double-speak, it’s time for ordinary Americans to move beyond the words of politicians and look only to their actions and track records. Conservatism is more than a word. Most importantly it is action. And the most revealing action a politician takes is his or her vote. Their vote affirms who they are and what they believe.

The Omnibus vote this month separated the wheat from the chaff. And sadly, if chaff is worthless, the Republican majority in both houses of Congress is the epitome of worthlessness, at least until a new crop of true conservatives is elected.

Washington Math: 1 Step Forward, 2 Steps Back. But There’s a Better Way
Protecting a Billionaire President: ISIS & the Trump Empire
The price of courage & cost of fear. Which will you pay?