6 Leadership Traits of a Roman Warrior

Recently I was re-reading a story in the gospel of Matthew in which a Roman captain came to Jesus with a problem of grave concern.  The captain’s servant was very ill and in dire pain.  He had heard of Jesus and the miracles he was performing and he believed Jesus could heal his servant.  In the story, we see six traits of a successful leader being demonstrated by this Roman warrior.

As a point of reference for the rest of my comments, I would encourage you to read this short recounting of the conversation between the captain and Jesus (Matthew 8):
[tagline_box backgroundcolor=”” shadow=”yes” shadowopacity=”0.7″ border=”” bordercolor=”” highlightposition=”top” content_alignment=”” link=”” linktarget=”” modal=”” button_size=”” button_shape=”” button_type=”” buttoncolor=”” button=”” title=”” description=”” margin_top=”” margin_bottom=”” animation_type=”” animation_direction=”” animation_speed=”” class=”” id=””]

When Jesus arrived in Capernaum, a Roman army captain came and pled with him to come to his home and heal his servant boy who was in bed paralyzed and racked with pain. “Yes,” Jesus said, “I will come and heal him.”

Then the officer said, “Sir, I am not worthy to have you in my home, and it isn’t necessary for you to come.If you will only stand here and say, ‘Be healed,’ my servant will get well! I know, because I am under the authority of my superior officers and I have authority over my soldiers, and I say to one, ‘Go,’ and he goes, and to another, ‘Come,’ and he comes, and to my slave boy, ‘Do this or that,’ and he does it. And I know you have authority to tell his sickness to go—and it will go!”

Jesus stood there amazed! Turning to the crowd he said, “I haven’t seen faith like this in all the land of Israel…”
Then Jesus said to the Roman officer, “Go on home. What you have believed has happened!” And the boy was healed that same hour![/tagline_box]

Two thousand years ago, in an era when life had very little value and when servants were viewed as property of their masters, we read of this Roman warrior captain, approaching Jesus in search of a cure for his servant’s illness.  Such behavior by a leader of great power and prestige was not only unusual but likely unheard of.  The captain sought to serve his servant by looking after his health needs.

Fast forward to today and we at times see servant leadership in a business owner or manager who makes personal or business sacrifices due to his concern for the welfare of his employees.  This principle is routinely touted in business books and conferences dealing with success and it serves to remind us that “…he who is greatest among you will be your servant.”  (Matt 23:11)

So, do you want to be great?  Start by serving others out of a heart of love and true concern for them.  But be prepared for a change to occur in you.  You see, as you develop the quality of serving others, you’ll soon learn that being great is no longer a driving motivation for your actions.

Being great does not have to be a prideful thing.  But desiring to be great is always prideful.  The Roman captain demonstrated his greatness through his humility.

Notice that when Jesus offered to come to the captain’s house, he was quick to acknowledge that he was not worthy to have Jesus in his home.  As a Roman captain, he no doubt had been taught that Jews were subservient to him.  Yet, this man reflected the leadership quality of humility in suggesting that the “lesser” was in fact the greater of the two.

One definition of the word faith is “the substance of things hoped for and the evidence of things not seen.”  In the life of our Roman captain, we can see a mountain of faith in his life.  By the mere fact that he approached Jesus he was demonstrating his faith.  We also see that the captain acknowledged that he believed Jesus could merely say “Be healed” and his servant would be cured.  There was no wavering in the belief of the battle hardened captain.  He knew deep within his core that this was possible.

A leader oftentimes cannot fully understand how to achieve a goal but he will still reflect unfaltering belief that an idea or plan, with the proper actions and people, can and will come to fruition.  He understands this truth and so he pursues that passion with solid determination.  He is not halfhearted or tempered in his zeal to reach his goals but rather he fully anticipates that they will be achieved. 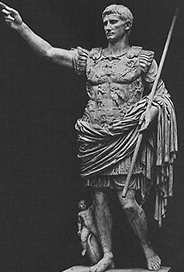 It’s interesting to note that this Roman captain, a man of great power and influence, did not come to Jesus demanding that he heal his servant.  It would have been routine for the captain to speak in a condescending manner.  Instead though, this leader recognized and affirmed Jesus as another leader.  Note also that the captain did not feel threatened by Jesus, even though he clearly understood that Jesus possessed great powers Himself.  Rather, the captain affirmed Jesus’ role, leadership and unique gifts.

As a business leader yourself, do you affirm your peers who are leaders?  When you are around other accomplished men and women do you affirm them?  Do you seek them out for assistance, input and counsel?  Just as the Roman captain sought out a leader who could help him in his time of need, it’s wise for us to do likewise.  Affirm other leaders by seeking them out, solicit their input and be willing to reciprocate that same spirit to others.

Too often we see leaders become accountable to no one.  In their self-inflated egos they begin to think of themselves higher than they ought and they forget a principle that is true of all of us: we are all accountable to someone.

In the case of this powerful Roman captain, he stated to Jesus that he had servants, soldiers and slaves who all reported to him.  Yet, the captain acknowledged that he was under the authority of his superior officers.  He too was accountable to someone.

Whether you are the CEO of a Fortune 500 company, or the entrepreneur of your own enterprise, do you live out this truth?  There is something about having to answer to another person for our actions, attitudes and plans that will cause us to be measured, thoughtful and considerate of both our own choices and in the treatment of those whose lives have been entrusted to us.

Perhaps the word that characterizes American business most today is results.  Wall Street, CEO’s, managers and quarterly reports all have one thing in common: they are all measured by their results!  But results flow from action, or in some instances lack of action.

As we wrap up our story of the Roman captain, perhaps the most significant truth that we can see from his life is that without action there would have been no successful outcome for the servant.  The captain’s deliberate and decisive action yielded the desired results:  the servant was healed and his life saved.

Likewise, in your business, once you’ve weighed out your options, do you take deliberate action to achieve the results you seek?  Leaders take action which then yields results.  Don’t hesitate or flinch.  Take in all the relevant information to make your decision but then Act.  It’s the only way you will ever achieve the results you desire.

There are many other traits that good leaders demonstrate and we’ll continue to explore them in the days to come.  However, as an entrepreneur myself, I have experienced the value of these six leadership traits in my business and personal endeavors.  I trust that as you’ve read this you’ve been reminded of the traits you are mastering while being encouraged to consider some that might assist you in furthering the goals you have for your business and life.