Capitalism, Greed and the American Way: Are they synonymous? 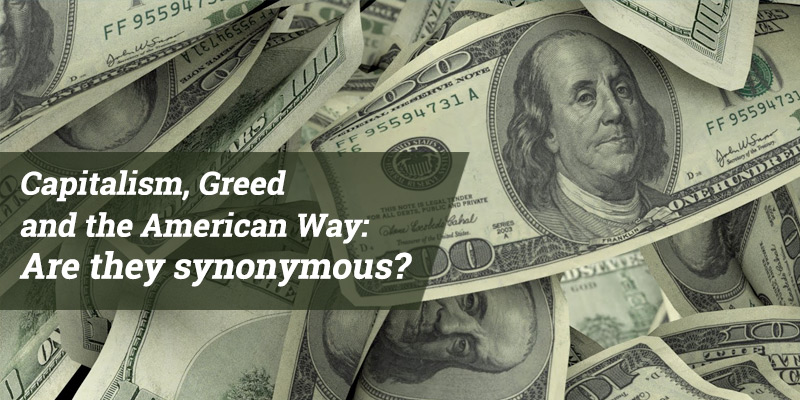 In our current culture, it’s hip to equate capitalism with greed. The people who associate these terms suggest that the two represent the “American way” — as if they are synonymous. Entire movements and ideologies have grown out of a disdain for capitalism. Whether Communism of the last century, or the Occupy movement in recent years, there is a growing perspective that capitalism is a flawed system, that greed and selfishness are integral to it, and that it must be replaced.

Capitalism in its most basic definition is simply:

This economic system, berated by many, is the approach that places the individual as the supreme authority over economic ventures, their ownership and the ultimate distribution of their product to a would be customer. In contrast to capitalism is the economic system that elevates the government to the position of authority and the ultimate master of the individual, often referred to as socialism, or in its more radical form, communism.

However, noticeably absent from the definition of capitalism and other forms of economic systems is any reference to greed or selfishness. I would contend that these two human flaws, encountered in the best examples of mankind, are present in all of us. So whether one finds himself working in a capitalistic society or a socialistic one, greed will be present in both.

When individuals berate capitalism as evil and greed-induced or suggest some other negative attribute, they typically point to a company, industry or even an entire society that provides fodder for their argument. I think of the instances just a few years ago when financial behemoths collapsed as a result of the greedy and selfish decisions of their executives. At the same time many of these same executives made out like bandits with their “golden parachute” deals. To compound the calamity, politicians gratuitously bailed out some of these firms on the backs of the American taxpayers.

Just this week I was meeting with a young entrepreneur who recounted the story of how his family’s new start-up company was defrauded out of $100,000 by a national corporation just days before that national company filed for bankruptcy protection. The company ordered the young entrepreneur’s product, knowing all the while that just days later they would seek bankruptcy protection. By then though the product would then be in the company’s possession and the payment for that product would be tied up in the court for months to come. Was greed and malicious intent involved? Without question.

Examples such as the two just cited are undisputed evidence that greed and selfishness often abound within capitalistic endeavors. But here’s the question: Should we impugn the 28 million businesses in America and their owners based on the actions of a number of errant ones?

To partially answer this question let’s apply this same reasoning to another area of our society. Consider for just a moment a family where the father is a workaholic, totally engrossed in his company to the detriment of his family. At the same time, the mother is self-absorbed, interested more in her friends and high society than the needs of her children. The husband may fail to tell his children or wife that he loves them, given his undue focus on his business. When he arrives home from work, he may “kick the cat,” yell at the kids and quickly turn his attention to his overwhelming business projects. Meanwhile, his wife throws some meals in the microwave and heads out for a night of socializing with her friends. Clearly, this husband and wife are failures as parents, with their priorities all amok and their children will sadly suffer as a result. But because this couple fails to exemplify what good parents look like should we denigrate the concept of families and impugn the thousands of parents that are seeking to do it right?

Likewise, when I hear the denigrators of capitalism throw up examples of companies and their CEO’s, whether a few or even dozens, who exemplify “greed gone wild” in their capitalistic endeavors, it ignores the reality that hundreds of thousands of business owners in our nation are genuinely seeking to offer a product or service to meet the needs of their fellow man and in so doing generating an honest profit.

Profit is what enables a business owner to provide for his family, his community, his church and his world. And that profit is enhanced and incentivized via capitalism. So if you are a business owner, by all means check your motives to make sure they are pure. But never, ever shy away from pursuing the dream of building and growing your business enterprise. Each time you sell your product, generate a profit and reinvest that profit into growing your business, you exemplify capitalism, the greatest economic system ever known to man and upon which our nation was founded.

Because of you and millions of other risk-taking entrepreneurs, you continue to preserve at some level the America that our forefathers envisioned and of which one of my favorite US Presidents, Ronald Reagan, referred to as “the last best hope of man on earth…”

Thank you for building your business the American way, via capitalism and free of greed and selfishness.

Too Many Citizens, Too Few Soldiers
King Trump vs We the People
The Wildly Profitable Gift Shop on the Titanic: The Dilemma