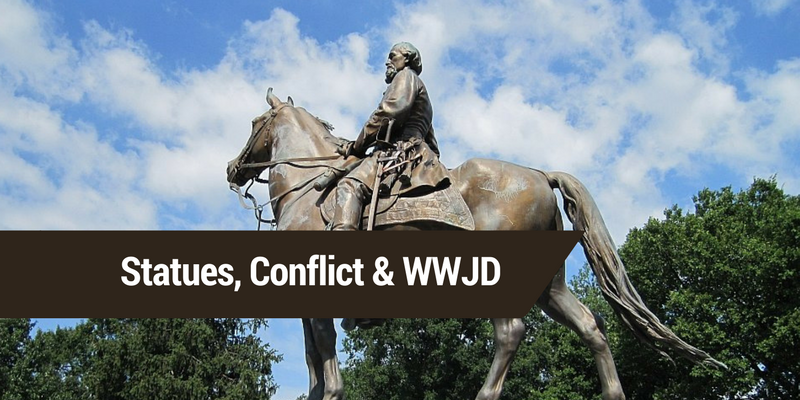 “Those who say they live in God should live their lives as Jesus did.”  1 John 2:6

As Americans weigh in on the latest race relations battle, I can only imagine how satisfied Satan is, knowing that he has once again fanned the flames of division, racism and hatred in our nation. It seems that these skirmishes continue to flare up, no matter how many years we move away from the scourge of slavery that marked our nation’s past.

So as iron and stone artifacts are receiving increased focus by newspapers, cable news, and social media, what seems to be lacking, at least for those who claim to be followers of Jesus, is WWJD — as in What Would Jesus Do?

There was a time when this slogan was routinely seen on bumper stickers, wrist bands, and t-shirts. And many continue to pose the question, WWJD, to test their actions and words. But the problem with using WWJD is that too often a person’s subjective evaluation can yield multiple answers, if Scriptures are not abundantly clear.

So I’ve been searching the Bible for answers to how Christ’s followers should respond to the calls for removing statues, flags and monuments. Rather than pragmatic or even patriotic approaches, I’m more interested in what Jesus would actually do were He here physically today. But as I considered the likelihood of a subjective response to this latest American problem, I became more intrigued with WDJS — as in What Did Jesus Say?

If you grew up never knowing your father, but he left you a book with explicit instructions on what he valued and believed, such a document would be of great value as you encountered life’s struggles.

You and I never had the privilege that the original twelve disciples had, to not only hear the words of Jesus but to also see Him live those words out day after day. So when Jesus told them, “Love your enemies and pray for those who persecute you” and the disciples then witnessed Jesus loving and forgiving those who tortured and crucified Him, they could see that what Jesus said directly impacted what He did.

So whether it’s Jesus or you and me, our actions are driven by our thoughts and our thoughts spill out in our words.

If you and I profess to be followers of Jesus, and we routinely ask WWJD, then what Jesus said, and He directed others to say for Him throughout the Bible, should be of supreme importance to us as we deliberate over how to respond to statues and racism, and those who are drawing lines in the sand.

So let’s look at what the Bible has to say about how a follower of Jesus should respond to this latest racial skirmish.

“God blesses those who work for peace, for they will be called the children of God.”  Matthew 5:9

“Get rid of all bitterness, rage, anger, harsh words, and slander, as well as all types of evil behavior. Instead, be kind to each other, tenderhearted, forgiving one another, just as God through Christ has forgiven you.”  Ephesians 4:31-32

“Again I say, don’t get involved in foolish, ignorant arguments that only start fights. A servant of the Lord must not quarrel but must be kind to everyone, be able to teach, and be patient with difficult people.”  2 Timothy 2:23-24

“If we love our brothers and sisters who are believers, it proves that we have passed from death to life. But a person who has no love is still dead. Anyone who hates another brother or sister is really a murderer at heart. And you know that murderers don’t have eternal life within them.” 1 John 3:14-15

Looking to the Good of Others

“Love your enemies and pray for those who persecute you.”  Matthew 5:44

“Don’t be concerned for your own good but for the good of others.”  1 Corinthians 10:24

“Therefore, whenever we have the opportunity, we should do good to everyone—especially to those in the family of faith.”  Galatians 6:10

“See that no one pays back evil for evil, but always try to do good to each other and to all people.”  1 Thessalonians 5:15

“We who are strong must be considerate of those who are sensitive about things like this. We must not just please ourselves. We should help others do what is right and build them up in the Lord.  Romans 15:1-2

“Any kingdom divided by civil war is doomed. A town or family splintered by feuding will fall apart.”  Matthew 12:25

“Always be humble and gentle. Be patient with each other, making allowance for each other’s faults because of your love. Make every effort to keep yourselves united in the Spirit, binding yourselves together with peace.”  Ephesians 4:2-3

“Make allowance for each other’s faults, and forgive anyone who offends you. Remember, the Lord forgave you, so you must forgive others.”  Colossians 3:13

“So let’s stop condemning each other. Decide instead to live in such a way that you will not cause another believer to stumble and fall.”  Romans 14:13

“May God, who gives this patience and encouragement, help you live in complete harmony with each other, as is fitting for followers of Christ Jesus. Then all of you can join together with one voice, giving praise and glory to God, the Father of our Lord Jesus Christ. Therefore, accept each other just as Christ has accepted you so that God will be given glory.”  Romans 15: 5-7

“When one of you has a dispute with another believer, how dare you file a lawsuit and ask a secular court to decide the matter instead of taking it to other believers! Don’t you realize that someday we believers will judge the world? And since you are going to judge the world, can’t you decide even these little things among yourselves? Don’t you realize that we will judge angels? So you should surely be able to resolve ordinary disputes in this life. If you have legal disputes about such matters, why go to outside judges who are not respected by the church? I am saying this to shame you. Isn’t there anyone in all the church who is wise enough to decide these issues? But instead, one believer sues another—right in front of unbelievers! Even to have such lawsuits with one another is a defeat for you. Why not just accept the injustice and leave it at that? Why not let yourselves be cheated? Instead, you yourselves are the ones who do wrong and cheat even your fellow believers.”  1 Corinthians 6:1-8

This last weekend our nation was reminded of the priority of life, unity and cooperation as Hurricane Harvey bore down on Texas, wreaking death and unimaginable destruction for millions of our fellow Americans.  Interestingly, my blog post last week entitled “Racial Strife: Finding the Antidote to the Enemy Within” dealt directly with such catastrophic events that can bring our nation together and what the two step solution is for this division we are facing. 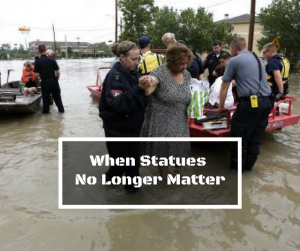 While most of us have not been directly impacted by Hurricane Harvey, our hearts, minds and prayers are with those who are struggling to survive.  So as I was communicating with some friends in Texas and viewing the scenes of catastrophic destruction, the following thought suddenly struck me:  Statues No Longer Matter

When an event like a hurricane, a terrorist attack or something similar occurs, our attention is immediately brought to bear on what is ultimately important. Likewise, if we are a follower of Christ, we should understand on an even greater scale that we have opportunities to make an eternal difference in the lives around us when we chose to live as Jesus did.

As you and I consider the controversies playing out over statues and monuments, may we remember the words of Jesus and the scriptures, focus our attention on eternity, and then adjust our behavior to align with God’s principles.

If you think others might benefit from this post, please consider forwarding it to them, including your pastor.  And feel free to share your thoughts with me. 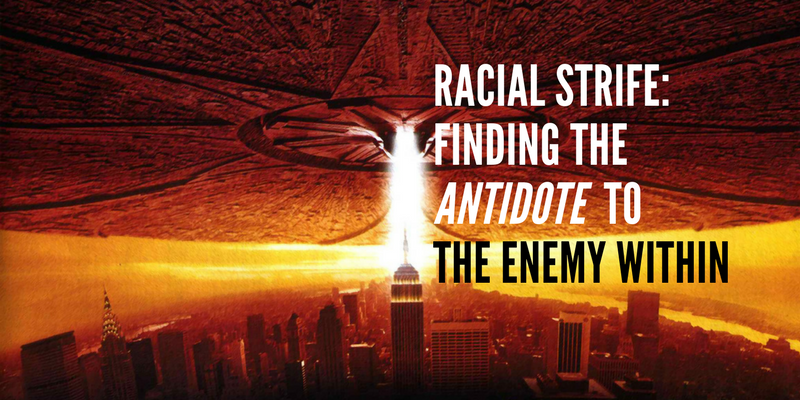 Racial Strife: Finding the Antidote to the Enemy Within

If you’ve ever watched the movie Independence Day, or one of the many other films that have been made over the years about aliens attacking the world, you know there’s one consistent theme with all of them: There is a common enemy that seeks to annihilate mankind, and this common threat brings together people of every race, background, and even religion to fight the enemy. The myriad of differences of the people no longer matter. Rather, the people become united as one because without such unity they will surely die.

“American will never be destroyed from the outside. If we falter and lose our freedoms, it will be because we destroyed ourselves.”

The President who led our nation to battle the evil of racism, which resulted in the deaths of 620,000 Americans, had a front row view of the hatred that nearly destroyed our nation. And he ultimately lost his life because of that hate.

Since the founding of our great nation, the scourge of racism has pulsated through our communities. If we are honest with ourselves though, racism flows in all directions. It is not limited to a particular race or skin color.

Likewise, racism is merely the vehicle that carries the real threat: Hate.  We hate others because of their skin color, or their socio-economic status, or their geographic location in our nation, or the wealth they possess, or the education they were provided, or the President they voted for, or a host of other reasons.

Pure and simple, Americans Hate. And the latest stage where we have seen that hate playing out is in the streets of Charlottesville as KKK and other white racist groups battled with BLM and other black racist groups. Sadly, if we’re honest with ourselves, hate is often present in our own hearts and lives. As we view the bloody scenes of men and women clashing in the streets, what wells up in our hearts?  Is it anger or sorrow?  Is it the desire for retribution or forgiveness?  Is it rationalization or condemnation?

Jesus said that we should be willing to forgive our brothers up to seventy times seven, symbolizing an unending flow of forgiveness. Yet, are we willing to do so?

Consider that unforgiveness is a sin that directly severs our relationship with God, as Jesus affirmed:

Later, when asked what the greatest commandment was, Jesus replied:

The antidote to the poison of hate is a two step process: forgiveness and love. This process requires a daily commitment on our part to insure that the enemy of mankind, hate, does not well back up in our hearts. Unless we commit ourselves to the discipline of forgiveness and love, the future of the union for which so many bled and died is at stake. But more importantly, the eternal destiny of our own souls hangs in the balance.

Thank you for reading and if you enjoyed this post, would you mind forwarding it to a few friends?  Thank you.