5 Traits of an Effective Leader in a Crisis: Leadership Lessons from the Chattanooga Terror Attack 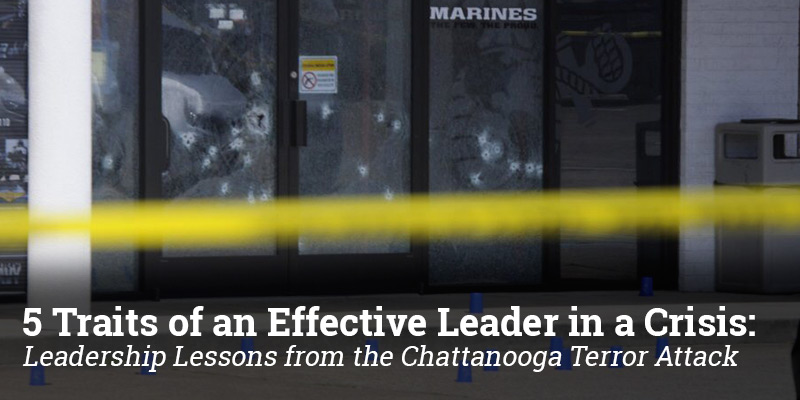 This last week has been one which the citizens of Chattanooga, Tennessee will never forget.  If you are remotely in touch with the news, you are aware that the city where I live became ground zero in the global battle between good and evil when five US servicemen were tragically murdered by a 24 year old islamic terrorist on July 16.

This article though is not about the terror attack itself.  Rather, my goal is to identify what lessons can be learned when a leader all of a sudden finds himself in an unexpected crisis.  How should one respond?  And are there preparations a leader can take in advance of a crisis?

First, let’s all admit that unexpected events or crises occur to all of us.  That is the nature of life.  And in business, every entrepreneur and executive has experienced this truth.  While we dream and plan for success, we know that at times a crisis can interrupt our plans and can totally derail our best intentions.

When life’s storms hit, your character will determine how you will stand and in what manner you will respond.  The depth and strength of a tree’s roots determine the magnitude of the storm it can withstand.  And like the tree, you will not grow your roots in the midst of a life storm.  Rather, the roots of your character must be nurtured, developed and strengthened prior to the storms of life and business.

So how can we grow the roots of our character deep and strong so that when those storms arrive, whether in business or in life, we will do more than “hang in there?”   Can we rise above, provide strength and courage to others, preserve and protect the assets we are responsible for, and ultimately grow stronger from the battering me might take?

As I’ve observed the response to the Chattanooga crisis this week and have been engaged in my own way, I have seen the following leadership principles either exemplified or sadly ignored by some of our community leaders.

1.  Leaders plan and rehearse for the unexpected

We’ve all heard the phrase “expect the best but plan for the worst” but I prefer a twist on that quote.  Chart your course for success but expect and plan for stormy winds in route to your destination.  When you encounter rough seas in your life or business, will you be prepared and have you rehearsed how you will respond to those stormy gales?

During a news conference this week in Chattanooga, I was particularly drawn to a statement by our Chattanooga Police Chief.  He shared how that many of his officers thanked him for the times when they had rehearsed for the type of incident that they faced in subduing and killing the terrorist.  Had they not planned and rehearsed their response, there was no doubt in their minds that more lives may have been lost, including their own.  You and I may not be asked to plan or rehearse for a life or death scenario.  But your business’ success may be at risk depending on whether you have planned and rehearsed for that next crisis.

2.  Leaders are called to make decisions, even if at times all the necessary facts are not known.

Sitting down over a cup of coffee and calmly writing out a business plan to expand sales for the next year does not involve too much “crisis management.”  It’s not too difficult to make decisions in such a scenario.  However, if one of your business properties is on fire and it calls for some quick but potentially uninformed decisions, failing to call the shots could make the difference between lives or property saved or a total loss.  As I have followed the responses to the tragic event in Chattanooga by elected leaders in Tennessee as well as around the country, I have seen the best and the worst of decisions that illustrate this very principle.

Within two days of the attack on two military locations in Chattanooga, governors in five states took immediate action to reverse long standing policies that left the military personnel unarmed at certain military installations in their states.  While all the facts may not have been known, these governors took immediate and deliberate action in favor of protecting lives.  In contrast to their decisive action, the Governor of Tennessee has as of this writing delayed implementing any new policy that would provide for enhanced safety of the military personnel at facilities in TN.  While this may seem a “safe” option for this Tennessee leader, we must remember that doing nothing or choosing to make no decision is in fact a decision.  Hesitate and your business may crumble.

3.  Leaders provide strength when the confidence and courage of others are challenged. 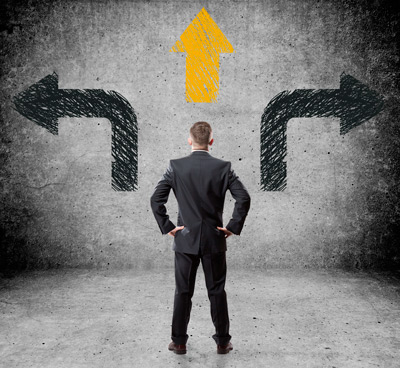 When a crisis hits, whether in a city, business or family, there are those whose confidence and courage waver.  While none of us are exempt from the possibility of such a response, an effective leader realizes that others are looking to him not only for decisions but as importantly for strength and courage in the midst of the storm.  A leader’s timid response will affirm the fear and lack of confidence his employees or constituents might be experiencing.  Conversely though, a leader’s courage and conviction in the midst of the crisis will serve to encourage and embolden those for whom he is accountable and their confidence will be strengthened.

4.  Leaders reach out to others for counsel, input and support.

A good leader recognizes that he does not have all the answers.  However, in a crisis that awareness is heightened and he actively seek the counsel of others.  As a leader he no doubt has strong views of how to deal with the storm he is facing and he may even possess what he believes is the correct course of action.  However, because he is a good leader, he understands the importance of seeking counsel from trusted advisors who are free to be honest with him.

The day after the Chattanooga terror attack a good friend of mine was invited to lunch with a leading official in our community.  The purpose of the luncheon was to solicit input and advice from my friend.  As they talked, it was clear that this official was open to the counsel and input from this trusted advisor and with that additional perspective he would be better equipped to meet the demands of his position.

Never underestimate the importance of this trait.  It can radically expand your perspective, ideas and solutions as you apply one of the most basic principles of all:

“Where no counsel is the people fall; but in the multitude of counselors there is safety.” (Proverbs 11:14)

5.  Leaders speak truth, even when it’s not popular

In an era when political correctness rules the day, people long for truth.  Making this a matter of practice is a foundation for building character and achieving success.  If you don’t practice truth during mundane, everyday activities, then rest assured truth will not be found in your crisis.  Yet in a crisis, perhaps the most important attribute that must be displayed between those going through the crisis is truth.  Without truth, there is no trust.  And without trust, there will be no buy-in by your team to the solutions that you propose to solve the crisis.

In the hours and days following the tragedy in Chattanooga, the communication by some leaders has been less than truthful.  Or at the very minimum, many members of the public have had significant questions about the veracity of the feedback, news conferences and briefings being provided.  Consequently as those same leaders attempt to move from explanation to solutions, there will be difficulty securing buy-in because of the trust that was lost initially.

So never let truth become the victim to popularity or seeking to sugar coat what your team needs to hear.  While the truth may hurt, it’s the only firm foundation a relationship, business or life can be built upon.  Pursuing truth will serve to advance your mission, and in a crisis, it’s the best way forward.

In closing, I’ve heard it said that you’re either in the middle of a crisis, leaving a crisis, or are heading into the next one.  This is not pessimism.  It’s merely life.  So as you contemplate this reality, I trust you will remember these five traits of a good leader.  Doing so will insure that the success you seek will be achieved, in spite of the crisis you are facing.

Life, Fortune & Honor: Is Your Vote Enough?
The Secret to Knowing God's Will, In Business and Life
Too Many Citizens, Too Few Soldiers