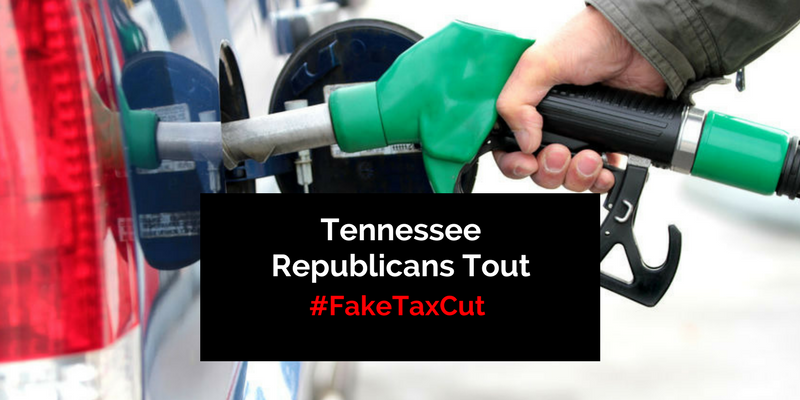 This last year has been a year in which the term #FakeNews gained prominence in America.  It seems that everywhere you turn, false reports are regularly popping up as fact. Amazingly, Wikipedia even defines #FakeNews as this:

Fake News is a type of hoax or deliberate spread of misinformation, be it via the traditional news media or social media, with the intent to mislead in order to gain financially or politically. It often employs eye-catching headlines or entirely fabricated news-stories. They have no basis in fact, but are presented as and believed to be factually accurate…

Pathetically though, Republican politicians are now getting in on the #FakeNews trend in Tennessee and here’s the background.

Republican Governor Bill Haslam proffered a bill he entitled the IMPROVE act (Improving Manufacturing, Public Roads and Opportunities for a Vibrant Economy).  The bill, as modified, would increase gas taxes in Tennessee over $300 million per year to fund road repairs across the state.  However, in order to “offset” the tax increase that Tennesseans will see at the pump and feel in their wallets, the bill would also reduce taxes on groceries, but not by an equivalent amount.  In fact, less than half of the increase is offset by the grocery tax decrease.

To make up the difference, Haslam, bolstered by Republican “yes-men” legislators, cobbled together a tax decrease via two other taxes.  The first decrease is in the Franchise & Excise Tax, exclusively a business tax.  The second decrease is in the Hall Income Tax, a tax on certain investment income, that only a very small percentage of individuals in Tennessee pay.  Furthermore, legislation was passed last year, before Haslam’s 2017 Gas Tax proposal, that agreed to phase out the Hall Tax over several years, with a full repeal by 2022.

So, if you consider the details of Haslam’s proposal, it’s clear that the vast majority of hard-working Tennesseans will never benefit from the F&E Tax decrease or the Hall Income tax phase out.  And the marginal decrease in their grocery tax will not even come close to offsetting the increase they will see when they fill-up each week at the pump.  So the truth is most Tennesseans will see a drop in their disposable income if Governor Haslam’s IMPROVE “Gas Tax” bill is passed by the Tennessee legislature.

As a backdrop to the whole debate over Governor Haslam’s Gas Tax is the fact that Tennessee has enjoyed a record $2 billion budget surplus this last year.  Additionally, the surpluses are projected to continue for the next several years.  Consider though that the source of government receipts is predominantly from taxes.

So, in simple terms, Tennessee overtaxed its citizens $2 billion last year, and it projects to continue overtaxing them for the foreseeable future, upwards of at least another billion dollars.  But worse, rather than use those surpluses, Governor Haslam and many Republican legislators want to raise taxes even further via Haslam’s Gas Tax bill.

As a result of these surpluses, a number of alternate proposals have been offered to simply divert for road repairs a portion of the surpluses in a similar amount to what Governor Haslam is requesting.  This would not only replace Governor Haslam’s proposal but it would also eliminate any need for a tax increase.

But here’s where things cross the line from just a bad policy decision to a purposeful act of deception. Governor Haslam’s “yes-men” in the legislature have been pulling out all the stops to push the Governor’s IMPROVE bill through, by hook or crook.  But because of the constant efforts by grassroots activists to expose the truth that the flawed bill will raise taxes on most Tennesseans, according to the Tennessee Star, Transportation Committee Chairman Rep. Barry Doss (R-Leoma) and Rep. Gerald McCormick (R-Chattanooga) led the effort to rename the IMPROVE act to the “Tax Cut Act of 2017.”

Yes, you read that correctly.  By falsely applying tax cuts that 1) apply solely to businesses (F&E Tax), and 2) were agreed to in a prior year and do not apply to the majority of Tennesseans (Hall Income Tax), Rep. Doss, Rep. McCormick and a host of other Republican Representatives are deceptively pronouncing that a bill that increases taxes on hard-working Tennesseans, will actually cut taxes on them.

So is this #FakeTaxCut a foregone conclusion?  Not hardly.  If there is a lesson in Trump’s victory in November, it is that the People can still determine the outcome of their government.  But Trump only won because people showed up and let their voices be heard.  And that’s the only way that Haslam’s #FakeTaxCut will be defeated — if Tennessee voters pick up their cell phones, and take 60 seconds to let their voices be heard.  If you’re willing to do so, then the price of gas at the pump may not go up.  But if you won’t invest a minute of your time, then you can count on Republicans, the party of “lower taxes,” to raise your taxes.

The choice is YOURS.

Why Jesus Did Not Seek to Change the Political
A Second American Revolution: Defeating The Enemy Within
Too Many Citizens, Too Few Soldiers